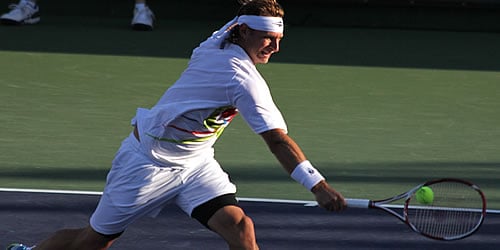 David Nalbandian will take on Rafael Nadal in the quarter-finals Photo: Marianne Bevis

When the draw for the BNP Paribas Open was made, those with an interest in David Nalbandian may have looked towards the heavens, let out a sigh of resignation and expected one, maybe two wins.

In every round, he faced a higher ranked player, including No24 seed Marin Cilic, No10 Janko Tipsarevic and, should he make it to the fourth round, as likely as not the formidable No6 Jo-Wilfried Tsonga.

On paper, therefore, the chances of the gifted Argentine—who a few weeks back crossed the invisible barrier of a 30th birthday—recapitulating his memorable match against Rafael Nadal at the Indian Wells Tennis Garden three years ago seemed no more than a twinkle in the eye.

Nalbandian was a Wimbledon finalist at the age of 20, had won the Masters Cup at 23 and won two indoor Masters titles in the space of a month in 2007. More significantly, in both of those Masters—Madrid and Paris—he beat both Nadal and Roger Federer—and also Tomas Berdych, David Ferrer and Novak Djokovic along the way.

During 2008, there were five more finals, two of them leading to titles, and before meeting Nadal for the first time since his 6-4, 6-0 win over the Spaniard in the Paris final, he opened 2009 with his 10th career title in Sydney.

So there was a buzz about the match even before Nalbandian took a set and a break advantage with the sort of tennis that has so often beaten the best in the world.

His tight, compact action and light footwork have a deceptively easy look. He adopts the simple formula of hitting the ball from one baseline corner to the extreme opposite corner, sometimes finishing with a short diagonal sweep, sometimes following in to pick off a floating return with a volley.

They are the kind of smart tactics that can punish the fittest of opponents, even Nadal, and he had four match points on Nadal’s serve in the ninth game as well as one on his own: He had Nadal all but beaten for the third consecutive time.

But few can snatch defeat from the jaws of success as effectively as Nalbandian. While fans may enjoy his extended, beautifully executed rallies, like athletic chess, it is a demanding and energy-sapping formula. Without the fitness levels of, say, a Nadal, it is tough to maintain.

In this particular match, Nalbandian inexplicably changed his tactics at the very point where he had the win in sight, sending shots back to the same side of the court rather than swinging from side to side and following in to the net.

It was fatal. Nadal winkled out enough points to win the second set and, not for the first time, Nalbandian faded quickly in the decider.

More important for the future success of the Argentine, however, Nalbandian was to suffer a still bigger blow that would see him fail to reach another final for a year and half.

A month after losing to Nadal at Indian Wells, he withdrew from his next match against the Spaniard in Barcelona and, in May, underwent hip surgery that took him out for the rest of the year.

He started 2011 with renewed promise, reaching the finals in Auckland and then he beat Lleyton Hewitt in the first round of the Australian Open in a replay of one of the most memorable matches ever seen in Melbourne—the 2005 quarter-final that went Hewitt’s way, 10-8, in the fifth set.

This time, as the clock ticked past 1am and four-and-three-quarter hours, it was Nalbandian who won, 9-7 in the fifth. But he was forced to retire from his second match and went under the knife again, this time for a groin injury.

He made his return on the summer grass but finished 2011 outside the top 50 for only second time in 11 years and without a title for the first time since 2004.

2012, though, has shown signs that the Nalbandian form may be returning. He lost his second match at the Australian open, but it was long and close affair against No17 John Isner, and he has since plied his trade on South America’s clay. His runs in Sao Paulo and Buenos Aires, though, did not predict the kind of run that has brought the charismatic Argentine back into focus in California.

Perhaps his first win over Italian Potitio Starace was not a surprise, and maybe his defeat of Cilic, himself newly back from illness in only his second match of the season, was always on the cards, though the nature of it—more than two hours and two tie-breaks—was more than solid.

But things went from good to better with a win over top-10 Tipsarevic, a clutch three-set performance in which he closed out his only two break-point chances in another two-hour victory.

When he stood at a set and a break down against Tsonga, however, few expected Nalbandian to pull off another upset. The Frenchman served for the match at 5-4 but double-faulted to hand Nalbandian a break back and the Argentine served out the set 7-5. In the final set, he won all 12 of his first-serve points to sweep a 6-3 win and a shot at Nadal once more.

Since that last Indian Wells, they have played twice and, despite Nalbandian’s injury woes and drop in the rankings, he has been far from disgraced. In Miami 2010, he took the first set in a tie-break. In the second, at last year’s US Open, he again took Nadal to a first set tie-break, though this time he was on the losing end.

But surely this time, with so many games and so many hours in those 30-year-old legs—and against the strongest legs and lungs in the business—there really is no chance at all for Nalbandian.

What is certain, however, is that Nadal has the greatest respect for this old adversary who he finally beat, at the third attempt, here at Indian Wells three years ago. Nadal said yesterday of that match and that opponent: “It was amazing match. I remember I was so lucky in that match, that’s true, no? Always Nalbandian is a very tough player with unbelievable talent. He’s the kind of player that when he’s playing well he’s the best in the world…I have to be ready for everything.”