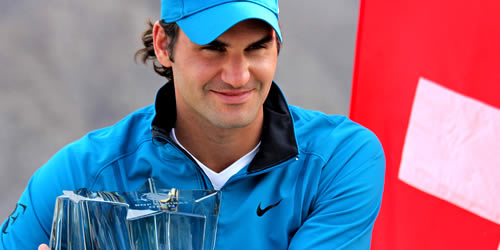 There can be few locations that set off a tennis match better than the Indian Wells Tennis Garden.

There can be few centre courts so well proportioned, so perfectly coloured, so enthusiastically filled as the one that hosts the tour’s ‘fifth Grand Slam’­—the BNP Paribas Open.

And on this particular March Sunday, there could be few places enjoying such crisp, bright light, the sun finding its way back onto the violet battleground at the heart of this mountain-encircled oasis.

Purple-grey clouds clung to the distant peaks, threatening a return of the unseasonable rain storm that hit semi-final Saturday, yet even so, this ever-optimistic place expected the only the best.

The final singles match of the tournament promised the same.

Roger Federer, riding a wave of wins and titles for almost six months, had already dispatched two Grand Slam winners: Juan Martin del Potro and Rafael Nadal, dropping just a handful of games to each. Nadal was one of only two men to have beaten him since last September. He was about to face the other one.

American John Isner scored his first victory over Federer on the indoor clay of Switzerland only a few weeks back to help the USA to a Davis Cup victory.

That was just the latest in an improving fun of form for the likeable, popular 6ft 9in man who opted to finish college before throwing himself entirely at tennis. He called himself a late bloomer: His fans were just full of admiration.

And Indian Wells, home soil, was proving that he really had come of age. He beat No1 Novak Djokovic in the semi-finals to reach his first Masters final and ensure a place in the top 10 for the first time.

By the time Victoria Azarenka had blown Maria Sharapova off the court to win the BNP Paribas Open women’s title, though, the skies were gun-metal grey: The storm clouds had indeed returned, bringing the biting wind back to Indian Wells.

Although the crowd was wrapped up warm, it took Federer a while to warm things up on court, much like his previous two matches. On his second service game, he went down 15-40 to face two break points and, having pulled back to deuce, served a double fault.

A smash and forehand winner saved the situation but neither man hit a good rhythm on serve straight away, hitting just 50 per cent of first deliveries into play.

But five games in, that sunny Californian optimism began to look a little sad: the raindrops fell and James Taylor tried to console fans and players with some Fire and Rain.

Just as in the Federer-del Potro semi-final, though, it was less the rain than the cold that troubled the players. Both sat with towels around shoulders and across legs, slouched under umbrellas and looking chilled in entirely the wrong way.

All at once, though, that optimism swelled again as the clouds began to drift apart. The lines were mopped, the towels shed and they resumed play within 15 or so minutes.

It was, too, an impressive return: Both took up where they left off with strong holds of serve. As they headed towards a tie-break resolution, each had lost only one point on their first serve, but facing one of the biggest weapons in tennis—the Isner first serve—is never a good prospect. For while Federer was second in tournament’s stats for aces, with 45, he was well out-classed by Isner at the top of the table on 65.

Isner took the first mini break but Federer pulled it back to level at 4-4. A 133mph serve from Isner kept him in touch at 5-5 but he shanked a vicious return of serve from Federer to face set point. Then Isner returned serve to the Federer backhand and drew the error.

Neither could finish the other off until an 7-7, until an extraordinary lob return from Federer landed on the Isner baseline for an 8-7 advantage, and a timely big serve took the set.

In the second set, Federer worked a small window against the Isner serve in the third game, 0-30, but that was about it until the seventh game.

Then, as if in anticipation of something special, the wind dropped, the air began to warm and the sky turned blue. The Federer serving went from good to outstanding, but now he was also onto the Isner serve more than anyone had managed this week.

Up to this point, both men had dropped barely a point on their first serve but at 3-3, Federer picked the Isner direction, chipped the serve back low to the Isner backhand, twice drawing the error. Then he did it a third time, and followed up with a backhand pass down the line for two break points, 15-40. One more chip back to Isner’s feet drew the fatal error: Federer had the break.

Isner barely got another look-in. Federer dropped only two points out of 30 on his first serve in the match, held serve, and decided to finish things off quickly. He worked one more break point against Isner and combined a forehand and backhand play to tie things up at the first attempt. His arms went aloft and a fourth Indian Wells title was his.

It had taken only an hour and 21 minutes from world No3, though on current evidence, Federer is starting to make a good case for being the best in the world at the moment. He was not going to acknowledge such a claim: “For now, Novak’s the best player. Still is.”

But this is Federer’s third straight title this year, his sixth since last autumn. After losing in the US Open semi-finals, he has won 39 of his past 41 matches. Along the way, he has avenged those two losses to Nadal and to Isner and has now equalled Nadal’s record of 19 Masters titles.

John Isner, having picked up his first Masters runner-up trophy, had to rush off to prepare for his doubles final but not before complementing his opponent: “He’s an incredible champion, to play him was an honour, so congratulations.”

He added, with a smile: “I’m sure he’s set some kind of record today.”

He was not wrong.