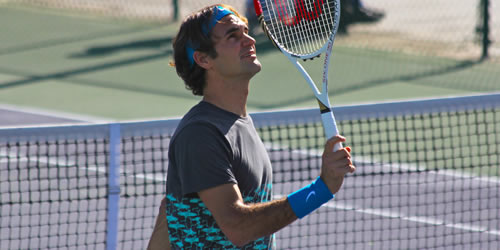 He looked, and sounded, a little less chirpy than usual. But then the Roger Federer schedule so far this year is enough to make anyone feel tired.

Since his loss in the semis of the US Open, he has lost only two matches out of 35—the semis of the Australian Open to Rafael Nadal and a Davis Cup rubber to John Isner.

The winning ways began when he made the long journey to Australia to play three Davis Cup matches: He won both his singles in four sets.

Into 2012, he won three matches in Doha before withdrawing, reached the semis of the Australian Open and, pausing only to lose a Davis Cup match in Switzerland, continued his unbroken 16-0 indoor streak by winning in Rotterdam.

From the chill of the Netherlands to the heat of the Dubai desert, and it was another five-time triumph—without dropping a set.

He might have settled down for a few days’ rest in what is his second home. Instead he jumped a plane the same night for New York to play an exhibition against Andy Roddick before finally arriving at the event he has won three times before.

Little wonder, then, that he’s tried to stay out of the limelight—give or take some ATP promotional films, photo shoots and the first news conference of the top men.

And where Andy Murray, Rafael Nadal and Novak Djokovic were hitting the courts here with a vengeance—twice a day in some cases—and all three are signed up to the doubles as well as the singles, Federer did not break cover.

So when he slipped into the chair behind the microphone, his vivid red sweater a little brighter than his body language, it was without the usual sparkle.

The same cannot be said for his answers. On that front, he was both candid and upbeat, interesting and frank. It was ever thus.

First, of course, he was asked about his intense schedule for, as he pointed out after winning in Rotterdam: “It’s somewhat of a busy period, with some short, short breaks, so I hope I’ll manage my schedule well and do all the right things—warm up correctly, sleep enough, all that stuff. It’s crucial right now because I don’t have much time to work with.”

He was also quick to allay any doubts about both his schedule and form.

“I don’t think I’ve overplayed to be honest. It’s a tough stretch but I’m feeling great.

“It’s been good that my body’s holding up well. It’s taken a beating on the hard courts, the temperature was ice cold in Switzerland, Rotterdam was still very cold, then going to Dubai.”

He elaborated: “I’ve been feeling good for quite some time now. I didn’t expect the win in Dubai, to be quite honest. I had a lot on my plate with the Davis Cup and Rotterdam. That was a big win in itself, as well, playing some good tennis after a tough week in Davis Cup.

“So the first couple of rounds were really big for me [and] I ended up playing really well in the conditions. I actually came out feeling better at the end than I did at the end of Rotterdam.”

It’s another theme that runs through each tournament he plays, especially since he crossed the threshold of 30—an imaginary line beyond which, it seems, decline is inevitable. As he has said before—and did so again here—it is just a date.

But he did reveal the subtle and steady changes that have taken place over the years, including giving up the many other sports in which he once indulged: skiing, squash and soccer.

“I’ve done my fair share of mistakes early on, but as time goes by, you just don’t have the same energy level any more. So you start cutting back a bit…and eventually, that’s where I am now, I don’t play any other sport than tennis. I just follow it and watch it.

“I wish I could do it but I just have to protect my body, and with the travel and the family and the hustle and bustle of everyday life, I’m busy enough. To me, it’s just important to practise really well, stay injury free, and enjoy my life on tour. It’s come gradually, but I think every player goes through a phase like that.”

And that maturing has brought a growing appreciation of the quiet attractions of Indian Wells itself.

“It’s a tournament I’ve grown to love a lot, actually. I used to like coming here but I wasn’t a crazy golfer when I was younger, or liked the peace and quiet. I was the kind of guy who liked New York or Miami, a place where something was happening, especially as a teenager. When I came here, it was always a bit too quiet for me.

“As time went by, I liked these weeks a bit more—calm, the weather’s nice, things can slow down a bit before the bustle in other places.”

So perhaps it is that calm, laid-back vibe of the oasis, the desert and the mountains that explains the demeanour. But to return to our beginning, it would not be a Federer conference without at least one provocative question and one equally candid response. This one, prompted by the extraordinary length of the Australian Open final, touched on the thorny issue of the time taken by today’s players—and more particularly the enforcement of existing rules by umpires.

“Are umpires enforcing the rules? No, I don’t thing so. I think they’ve been too loose about it. I don’t know why.

“I understand after a long rally you’ve got to give the guys some time to recover otherwise they’re not going to go on with the match, but I do believe the officials could be a bit more tough on timing.

“I’m not complaining a lot—but I don’t know how you can go through a three or four hour match with Rafa [Nadal] and not get a time violation. I think it’s natural that even I would go over time, but they never remind us. There were times—and I’m not just saying this to stir it up—when I think they could have been a bit more firm because in the end I don’t want the fans getting frustrated. You know, watch five points and it’s going to take five minutes. It can’t happen that way.”

As for the idea of a shot clock, “I hope it doesn’t go that far. It’s a little thing, but a little frustrating.”

Needless to say, the comment was put to Nadal—and it elicited perhaps the longest pause ever recorded in a press conference. Finally, he responded.

“Everything depends. The rules are there…you cannot expect players who play six-hour match, play rallies of crazy points, and rest 20 seconds. Somebody’s ready to do it. I’m not ready to do it. For me it is more an appreciation of the umpire than other things. We have to follow the rules but we don’t have to be like this [puts hands up to face like blinkers], we have to be a little more open in the mind.”

But by the time Nadal was giving his view of the time regulations, Federer was back where his tennis can do all the talking: on the azure blue of an Indian Wells tennis court—and back with a smile on his face.