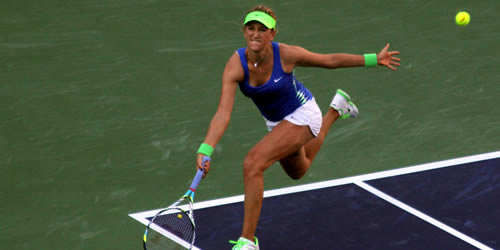 It was a day when former champions and World No1s took centre stage at the BNP Paribas Open and it was day when one of them went down fighting and one barely survived.

Fortunately for the former, the top-ranked man in the world and defending champion, Novak Djokovic, was playing the opening match in his doubles campaign with Davis Cup colleague, Viktor Troicki.

Both practised, bare-chested, to a vociferous, packed Court 15 at the very time when the Spanish pairing of Marcel Granollers and Feliciano Lopez were doing the same, barely noticed, on a remote outside court. But come Indian Wells’ Centre Court in the heat of the day, the Serbian duo found themselves playing second fiddle to the superior tactical partnership from Spain.

They went down 7-5, 7-5 but Djokovic was afterwards pragmatic about the value of the loss. “It was good to have some match practice in the Centre Court. I hadn’t played there this year so before my first singles match, it was important to spend some time on that court.”

He will be the first of the top four men’s seeds to open his singles campaign on a packed first Saturday schedule.

The other No1 opening her singles account today was arguably the hottest favourite for a title here this week. Victoria Azarenka had already got her feet on the Centre Court in her opening doubles match with Petra Kvitova: The pairing won for the loss of only four games.

It looked, at first sight, as though she should take little more time to win her first singles match, too, against Mona Barthel. The two women had already played twice this year—at the Australian Open and in Doha—and the 6ft 1in German had taken only seven games across both matches. So when Azarenka took a 6-4, 5-1 lead, the writing seemed to be on the wall.

However, the crowd was in for more of a treat than it expected. For despite the one-sided nature of her matches against Azarenka, Barthel is a young woman on the rise, currently ranked just outside the seedings at 37, and she won her first title in Hobart this year—doing it the hard way through three qualifying and five main draw matches.

She did the same to reach the quarters of Paris and the confidence of those runs showed in her aggressive comeback against Azarenka this time.

Barthel went on a six-game run that was finally halted by Azarenka who pulled level for the tie-breaker. Both were clearly gripped by nerves, firing double faults and over-cooked forehands, but it was Barthel who took the first advantage, 4-2, and a bold net-attack followed by a backhand winner took her to 6-4.

One more long forehand from Azarenka conceded the set and, even more unexpectedly, Barthel broke in the opening game of the third—and she was not done there.

In the third, Azarenka found herself defending deuce and in the fifth, courtesy of two double faults, she was broken again and down 4-1.

There was a time when such a nervy patch of play would have foretold a loss by Azarenka but this woman is now both a Grand Slam champion and a world No1 and that shone through at the right time.

She worked a break point in the next game and hit a big winning forehand to convert it. She came under pressure again on her own serve, but survived courtesy of another big forehand. Her last chance of survival came with Barthel serving for the match at 5-4, and survive she did. Helped by a couple of tired-looking forehands from the German, Azarenka broke again to level the match, but again the top seed came under pressure, faced three more break points and was broken again.

The final game played out like a miniature of the match. Azarenka took a 3-0 lead, only to see it pulled back to 4-4 with an untimely double fault. Then Azarenka pulled ahead 6-4 and again Barthel levelled, but the German eventually bowed under the pressure with two long backhands: the match was Azarenka’s in exactly an three hours.

Whether it will buoy her up or rub salt into the wound, Barthel actually finished the match with one more point than Azarenka, 127 points to 126. It should do the former and she did concede, in a long and eloquent press conference, that she was proud of herself.

Barthel did not fully focus on her tennis until her school studies were done at the end of 2009 so, as she pointed out, she is still doing everything for the first time.

Barthel looks to be a bright, articulate and charming addition to the 2012 WTA season and, with a searing backhand and a point-winning serve, she also looks sure to rise still further before the end of the year.

Azarenka survived to continue her Indian Wells campaign and continue her unbroken 2012 run, which now stands at 18 matches. She was candid in her assessment of the match.

“It was survival. But it’s a good feeling after a match like this to have a win…To win when you’re not playing your best it’s—more joyful.”

She will have to play better and cut down on the unforced errors when she takes on her next opponent. Svetlana Kuznetsova, has beaten her four times in their five meetings. But they have not played one another in three years, and a lot has changed in that time, especially in the tennis of Azarenka.

As for those other former champions and No1s, Andy Roddick, partnered by Mardy Fish, went out of the doubles competition via a championship tie-break, Jelena Jankovic—the 2010 Indian Wells winner—was the highest seed to fall against the rising US star, Jamie Hampton, and two-time singles and one-time doubles champion, Rafael Nadal partnered Marc Lopez to one of the most popular wins of the day against No3 seeds Michael Llodra and Nenad Zimonjic.

Across the rest of the tennis garden, too, there were winning stories for three former top-three men, each of whom can lay claim to veteran status. The eldest, at almost 34, is former No2 Tommy Haas, who beat Jarkko Nieminen, 7-6, 6-4. Nikolay Davydenko beat Sergei Bubka 7-5, 6-3, and David Nalbandian beat Potito Starace 7-6, 6-0.

The only other casualties among the seeds were No12 Anastasia Pavlyuchenkova, victim of another young American, Vania King, No22 Yanina Wickmayer to Jarmila Gajdosova and No19 Daniela Hantuchova to Klara Zakopalova.