Indian Wells 2013: Juan Martin del Potro comes from a set down to beat Novak Djokovic and set up a Rafael Nadal final 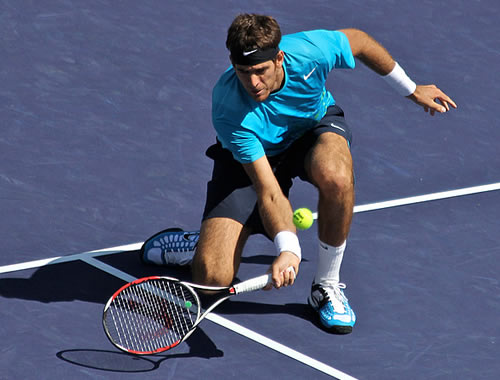 The buzz at the BNP Paribas Open had, from the moment the men’s draw was made, focused on two things.

Would Roger and Rafa renew their rivalry for the first time since Indian Wells last year? And who on earth could stop the progress of Novak Djokovic?

When the first came to pass, the anticipation was high, but the reality was less so. Injury compromised the tennis of Federer, and it was the Spaniard who surged into contention for his first hard-court title since career-topping year in 2010.

All nine of Nadal’s wins since Tokyo that year had come on clay but at this, his first tournament for a year on the surface he dislikes so much, he had enjoyed more success than most. Twice a champion, in 2007 and 2009, he was also runner-up in 2011 and was now in his eighth straight semi-final—a remarkable 38-6 record. He even won the doubles title in 2010 and 2012.

As for the second question, the Serb may have looked below par in the opening stages—perhaps finding the adjustment from the fast courts of Dubai, where he won his third back-to-back title, to the slower surface of the Indian Wells Tennis Garden a little testing—but by the time he had sailed through three threatening seeds, Grigor Dimitrov, Sam Querrey and Jo-Wilfried Tsonga, there was no longer any doubting his chances. In dismissing No8 Tsonga in 53 minutes, he dropped less than half a dozen points on serve and, in the second set, made not a single unforced error.

So by the time they reached the semis, the new buzz was about another prospect: the next in a rivalry just as enduring as Nadal’s with Federer. The Spaniard had met Djokovic 33 times in a relationship of dramatic swings in fortune. Djokovic had beaten Nadal in seven straight finals from Indian Wells in 2011 to the Australian Open last year, before Nadal hit back in all three of their 2012 finals.

All that stood in the way were two big men with big games.

First it was Nadal against the powerful and increasingly confident Czech, Tomas Berdych, who he had beaten in all 11 matches since 2006. But Berdych arrived on court with the second highest number of match wins this year—18—and two straight finals in Marseille and Dubai. He had also dropped the fewest number of games, 25, reaching the semis.

That seemed to show in the first half dozen games. Both men served well but Nadal especially so, using the high-bouncing court to add extra weight to his accurate and varied placement.

The difference between them, though, was the return of serve, and time and again Berdych found himself out of position for the ball that hurtled back at him. That was his downfall in the seventh game. He saved two break points but netted a forehand on the third.

Serving for the set in the 10th game, Nadal went 15-30 down, at which point he was given a time violation warning. He did not so much as pause, and reeled off three straight winners for the set 6-4.

Again in the second set, it was Nadal’s defence that stood out. He received very deep behind the baseline and looped his huge top-spin returns short over the net to draw Berdych forward. Nevertheless, he managed to stay in enough rallies to hold and turned his attention on the Nadal serve. He stepped in forced one error and then Nadal’s only double fault of the match to take a 5-3 lead.

The Spaniard is never more dangerous than when he is under threat. He cranked up the pace, dragged Berdych all over the court, finishing one point with the backhand of the match, a searing down-the-line winner. Berdych tightened, missed his first serves, faced 0-40 and hit a forehand long for the break back.

It was as though Nadal had never been away. The familiar strut and the scowl were back as he served his strongest game of the set, and Berdych felt the pressure. With his serve percentage now below 48, he hit a backhand long to give Nadal break point and gifted the game with a shanked easy smash.

The Czech did find eight more minutes of resistance—that was how long it took Nadal to survive five deuces and three break points—and had Berdych not netted first a forehand and then a backhand, the set may have gone his way. As it was, Nadal focused admirably, served admirably, and took the match, 7-5, to reach his fourth consecutive final since his return to the tour last month.

But Nadal’s straightforward win, impressive as it was, would be followed by the match of the tournament.

On past history, the del Potro was not the favourite. Djokovic had won eight of their 10 matches, and four in a row, all on hard courts. He was also on a 21-match winning streak dating back to last November.

Not that del Potro wasn’t in good form: He won in Rotterdam, reached the semis in Dubai, and looked very impressive in beating Andy Murray in the quarters. His biggest challenge, though—apart from the quality of his opponent—might be a physical one. He had played fewer than 24 hours ago while Djokovic was already done and dusted, and the Serb is one of the most ruthless tacticians in tennis, able to keep his opponent constantly on the move.

Djokovic opened, and set the standard with his clean, accurate and varied serving. Facing him was the big powerhouse delivery of del Potro, and both were working well. It was the same off the ground, with the Serb playing tight, precise, deep rallies, the Argentine unleashing his forehand to both corners as soon as an opening appeared. There was nothing to choose on the offensive, but the Djokovic defence, his movement and variety, gave him more leverage against the del Potro serve and gradually edged the points advantage.

He very nearly broke del Potro in the eighth, working four break points with some teasing cross-court rallies. Del Potro survived but could not resist on his next service game. With the match edging to an hour, he saved two break points but, despite some huge forehands, Djokovic’s shoes squeaked and screeched in defence, soaking up all that was thrown at him, until the Argentine made the key error. The Serb led, 6-4.

That physical aspect clearly began to play a part in the 100-degree heat. While Djokovic averaged little more than two minutes on his service games, del Potro’s figure was nearer five minutes. Between sets, the Argentine had his burning feet treated for blisters with an ice collar round his neck.

Perhaps it was the long delay, but Djokovic opened the second set with a poor game to concede the break. Not to be outdone, del Potro did the same, but compensated with his finest game of the match, chasing down Djokovic’s testing shots and finding acutely angled, powerful forehands to break again. His movement is deceptively languorous but his huge, slow strides seemed up to every task. He lead 3-1 and broke again for 5-2.

But he now served for the set into the sun, struggled to make his first delivery and Djokovic capitalised to break back. At the second time of asking, though, del Potro succeeded, 6-4. Two hours played and they were all square.

It was a revitalised Djokovic who started the third with a purple patch, and ran to a 3-0 lead, only for del Potro also to find a second wind. Now both played at their peak in a sequence of quite stunning rallies. The Argentine worked his way back to 3-3 and even had points to break again, but Djokovic dug deep to hold.

Del Potro had recovered from behind to beat Murray in more than two and a half hours, and he was on his way to making another remarkable comeback. Both men, still playing in 95 degrees, were drained, but del Potro’s forehand now shone, pounding Djokovic into submission. He broke in the ninth and served out a famous win, 6-4. After two hours 50 minutes, they were separated by just one point: 100 to Djokovic, but 101 to del Potro.

So the Indian Wells buzz is now all about whether the quietly spoken giant of a man from Argentina can add a third of the “big four” to his honours board—and along the way pick up his first Masters title. He hasn’t beaten Nadal since his run to the US Open title in 2009, but then he hasn’t let that kind of talk stop him so far.

As he said after this match: “I’ve played Murray and Djokovic; my body needs to recover. But I will do my best tomorrow.”