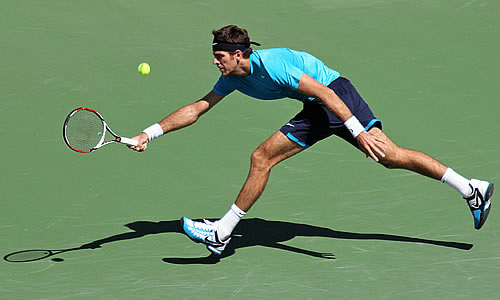 With seeds No5 and 6, Rafael Nadal and Tomas Berdych, already lined up for one BNP Paribas Open semi-final, it was the turn of the top-half of the draw to whittle four men down to two.

And with all four of them firmly in the top eight of the rankings, this promised to be another day of high quality competition.

All four—No1 Novak Djokovic against No8 Jo-Wilfried Tsonga and No3 Andy Murray against No7 Juan Martin del Potro—had won titles this year but the odds were stacked strongly in favour of the two who had contested the last two Grand Slams, Djokovic and Murray.

Djokovic, winner of the Australian Open and losing finalist at the US Open, had beaten Tsonga nine times in 14 meetings, including the last seven in a row. The top ranked man in the world, almost 4,000 points clear of the field, came to Indian Wells fresh from victory in Dubai on top of Melbourne and the World Tour Finals in London, a 21-match winning streak.

So while Tsonga may have won 12 from 15 matches this season, may have put in one of his best performances of the last 12 months in taking Federer to five sets in the Australian quarters, may have beaten Berdych to take the Marseille title, and may have found new purpose under the firm hand of coach Roger Rasheed, he had his work cut out against the two-time former champion in the desert.

Murray, the losing finalist in Australia but the winner in New York and at the London Olympics, had beaten Del Potro five times in six meetings. But they had not met since 2009, the year the Argentine also won the US Open title.

And there was very little between them this season. Murray was on a 13-1 win-loss run, Del Potro on 14-3. Murray won in Brisbane, Del Potro in Rotterdam. And here at Indian Wells, the Argentine had made the easier progress, dropping—along with Berdych—the fewest games so far: 17.

In Del Potro, Murray faced his first seed yet had dropped a set in his opener and barely survived an opening tie-break in the fourth round. So with Del Potro playing more varied and confident tennis with every tournament and approaching, perhaps, his pre-surgery form of 2009, he posed a dangerous challenge—and could halt Murray’s advance to that No2 ranking.

Djokovic came first, playing in the hottest part of a hot afternoon. Once upon a time, that would have spelled trouble, but the lean, super-fit, finely-tuned Serb is derailed by very little these days, and certainly not by his former physical limitations.

Tsonga managed to stay with him for the first four games but then a yawning gap seemed to open up between them. The Frenchman went 15-40 down, netted a volley returned at his advancing feet, and was broken.

Djokovic held to love and pressured again to draw another volley error, then a long forehand, and it was break point again. This time, Tsonga survived but he could not defend his next serve. With his error count already soaring to a dozen, he made three more—a volley and two forehands—and Djokovic broke to take the set, 6-3.

The Serb had dropped just three points on his first serve—but that would pale against his statistics in the second set. He opened with a love hold, and then tracked down drop shots and backhands like a whippet—fast, flexible and eager—to go 40-0 on Tsonga’s serve. A double fault completed the Frenchman’s misery, and with his man almost broken, Djokovic went on the offensive, taking the net for some crisp volley finishing to lead 3-0.

Tsonga earned some encouraging support from the crowd with his first hold of the set, but it would be his only hold. Djokovic’s service games flashed by in the blink of an eye and Tsonga conceded his own with another double fault.

One more love hold from the Serb and the match was done and dusted in 53 minutes, 6-1—with some astonishing figures to highlight just how accurate and consistent the Djokovic assault had been. He had not dropped a point on serve in the set, 14 first serves, two second serves. He had fired eight aces, not faced a break point and not made a single unforced error.

So Djokovic was ready and waiting for whichever Grand Slam champion survived the other quarter-final, confident in the knowledge that he had won the last three matches against Murray and the last four against Del Potro.

The conditions were still oppressive—94 degrees and with the afternoon shadows ready to edge across the deep azure rectangle of play.

Murray opened serve and got into trouble with a couple of wayward errors to go 15-40 down. He served big to hold and neither he nor del Potro faced another break point in the set. It unfolded in ever more gruelling points, each testing the other in some long, cross-court exchanges. Murray pressured the Del Potro backhand, knowing, no doubt, that the Argentine has been nursing a sore left wrist.

Yet Del Potro lived with him through this highly physical, chess-like ebb-and-flow of baseline play. Forays to the net, or even breaks in rhythm from drop shots, were few and far between. Both kept a high standard of serving—Murray made 19 points from 22 first deliveries—as they approached the tiebreak. The concluding game climaxed in a gripping 43-stroke rally to bring up set point and Murray served it out, 7-5, after 64 minutes.

If the oppressive conditions and intense contest favoured Murray’s physical superiority, it didn’t show at the start of the second set. Del Potro opened with a love hold, brought up 0-40 on Murray’s serve with a superb volley winner and Murray conceded the break with a double fault.

The Argentine raced to a 4-1 lead in 19 minutes and his huge forehand began swinging freely. He almost broke again in the sixth—Murray took 8 mins to hold it—and the Briton then attempted to up the pace with a sequence of net attacks. But del Potro did not back off and sealed the set, 6-3, with an overhead smash.

Murray kept up the attack in third and it earned him his first break point of the match, but a 137mph serve saved the Argentine who promptly powered to three break chances in the next. Once again, it was a huge del Potro forehand that drew the key error.

Murray was still full of energy and intent, and certainly looked the fresher and more aggressive man. And when Del Potro used up his last challenge to face deuce, Murray earned another break chance. But again some gutsy serving saved a weary looking Del Potro. Not done, he forced more errors to break Murray a second time. The Argentine made some tired errors serving at 4-1, but survived deuce to hold.

The match the raced to its conclusion when Murray made his seventh double fault to bring up 15-40 and match points, and an eighth brought down the curtain, 6-1, on an impressive Del Potro victory.

On display, especially in the latter stages, was the work Del Potro has done away from the court: on fitness and mobility but also on his net-work, which produced 15 winners. It was a complete and impressive performance, a reminder of the big Argentine’s prowess in winning a Grand Slam at just 20.

But this two hours and 32 minutes may weigh heavy in his legs when he faces Djokovic, all the while resting up somewhere after barely an hour on court. Time will tell.