Indian Wells 2013: Kirilenko has stood in the shadow of the more famous Maria for most of her career - but is making steady progress 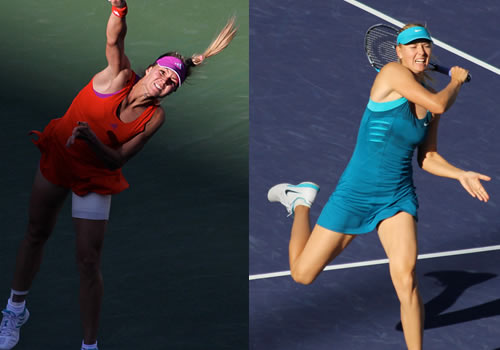 Her name is Maria. She was born in 1987 and turned pro in 2001. She is beautiful, she’s Russian, she has long blond hair, and she can wield a tennis racket with power, poise and not a little success.

The Maria in question is Kirilenko, and yes, she has much in common with her more successful compatriot, the taller Maria, the Grand Slam champion Sharapova. And for the second year in a row, the two Marias will face one another on the centre court at Indian Wells.

Kirilenko has stood in the shadow of the more famous Maria for most of her career. Sharapova made her breakthrough in 2004 at age 17, defeating the top seed Serena Williams in the Wimbledon final. That took her into the top 10 and she reached No1 in 2005.

She went on to win Majors at the 2006 US Open and 2008 Australian before she was forced out of the game for 10 months by shoulder injury. She eventually had surgery in October 2008 and has since won the other Major, the French Open, and regained the No1 spot for the fifth time last June—albeit only until Wimbledon—and was again in contention for the top place at the start of 2013.

In the face of Sharapova’s $24 million prize winnings and 27 titles, Kirilenko’s achievements have been altogether more modest—$6 million and seven titles. But Kirilenko’s career has shone in other ways, with 12 doubles titles and the doubles finals of both the Australian and French Opens during the last two years.

And what now stands out is her sure and steady progress up the rankings—a career high of 14 in singles and seven in doubles at the start of 2013. She reached her first Wimbledon quarter-final last summer, won the WTA Championships doubles title with Nadia Petrova in October and already has a singles title this year. And who’s to say she won’t do a Sara Errani—also born in 1987, and making the transition from great doubles tennis to top-10 singles tennis—and reach a Grand Slam singles final, too?

She clearly has the necessary self-belief. Here’s what she said this week at Indian Wells: “I think everybody has their own time. Somebody can be [at their highest ranking] at a young age; somebody needs more time. I feel I always played not bad, but now I’m playing better. The right moment for me is right now.”

Her view came on the back of one of her best tournament runs to date to reach arguably her biggest semi-final. But particularly significant is that she beat two major seeds on the way, first No3 Agnieszka Radwanska in the fourth round and then Petra Kvitova in the quarters. No wonder she was elated:

“Finally I reached the semi-finals! I feel good about beating two top-10 players in a row, especially since they’re two completely different kinds of player.

“I’m really happy I won this match. I had some problems with my knee during the first set but was able to keep fighting and win.”

She is a formidably fit woman, but has reached the semis the hard way. Each of her four matches extended to three sets, so perhaps it is no surprise she has some soreness.

Her problem, of course, is the other Maria, who reached the semis in altogether easier style, not dropping a single set. Sharapova is a former champion in Indian Wells—in 2006—and was runner-up to Azarenka last year, when one of her victims was Kirilenko. Their quarter-final proved to be a top-notch, three-set battle that Sharapova finally took, 3-6, 7-5, 6-2.

That has not been their only close contest, though. Their previous meet, at the Australian Open, went to Kirilenko in equally tight order, 7-6, 3-6, 6-4. And before that in Miami, it was Sharapova who came through in three.

So the Russian Marias have been locked together much of their professional lives—the first match of their six was back in 2005—despite their trajectories have been entirely different.

As they prepare for their latest meeting in the tennis garden in the desert, the gap between those two trajectories has begun to lessen just a little, but will it be enough to reverse the outcome? If her confidence has anything to do with it, Kirilenko thinks it might: “I have two wins over top-10 players here, and now I feel that I can be on this level. Nothing is scary out there. I can compete, and as you can see, I can beat them.”

In the end, though, it may be determined by the physical: Will Kirilenko’s knees be able to carry her past another top-five seed?

The path for whichever Maria advances to the final was made both tougher and easier with an unfortunate turn of events in the other pair of quarter-final matches. Victoria Azarenka withdrew ahead of her match against Caroline Wozniacki with an ankle injury, while Sam Stosur withdrew from her match against Angelique Kerber with a calf injury.

So while the defending champion Azarenka is out, the champion of 2011 Wozniacki enjoys an extra day’s rest ahead of her match against Kerber.

As for Kerber, a semi-finalist last year, she continues to enjoy a benign run through the draw. She is yet to face an opponent inside the top 30, and now faces a woman, in Wozniacki, who she has beaten in their last three matches. Had she met Azarenka, she story would have been the opposite: three losses in three matches in 2012.

It’s an ill wind that blows nobody any good.