Indian Wells 2013: Rafael Nadal makes a winning start on his return to the hard courts with a straight-sets win over Ryan Harrison 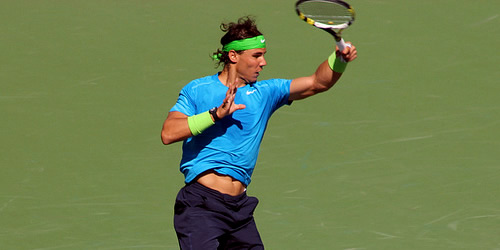 Few men in tennis could fill the headlines so constantly without playing a single match as the burnished Spaniard Rafael Nadal.

But when a man has won 52 titles, 21 Masters, 11 Grand Slams, and has spent almost eight years in the top five, an absence of any kind is noteworthy. When that absence has been for seven months, the impact on the rest of the tour becomes highly significant.

That Nadal’s arrival in Indian Wells marked his first match on a hard court in almost a year and the first time that the ‘big four’ of Nadal, Novak Djokovic, Roger Federer and Andy Murray had played the same tournament since the Spaniard made his exit from Wimbledon last year, made the frenzy surrounding his return all the more understandable.

Every practice session has been stacked with fans, every word reported with weighty commentary, every meeting with his most famous rival, Federer, plastered across every website. And when he sat down, almost every question, either directly or obliquely, was about his knee. Finally he pleaded: “Forget about the knees, please!”

And indeed, Nadal had already made a stunning return to tennis in the Latin American “Golden Swing”, finishing runner-up in his first tournament in Chile and winning titles in Sao Paulo and Acapulco. But clay is his ‘turf’ and kind to his troublesome knees. It was his transition to the less forgiving North American hard courts that would be the real test, and he hedged his bets:

“I feel very good. I’ve practised two times here… But seriously, I understand my situation after seven months. I think it’s not the right moment to talk about the knee. I am here to try my best. We’ll see how the knee responds on hard. The results on clay were positive, especially because the knee was feeling better and better every week, especially last week. Now I’m going to try here.”

He arrived for his opening match with the usual swagger, dressed in peppermint green and looking trim, tanned and relaxed. The confidence appeared to be justified—and despite his antipathy to hard courts, he had won the Indian Wells title twice, in 2007 and 2009. He pounded aggressively through the opening five games to break and lead Ryan Harrison, 4-1, in under 20 minutes.

The young American, though, dug in with some great attacking play of his own, rushing the net for some nice volley plays, and broke back in the sixth game. They headed to a tie-break, and Nadal raised his intensity to take it with ease.

Nadal, looking more comfortable and confident with each game, and despite facing three break points, would not waver as he had done in the opening set. He broke Harrison twice to take the win, 6-2, in an hour and a half, and proclaimed himself both content and cautious:

“I am satisfied to be in the next round. That’s the most important thing…Two weeks ago, I didn’t really know if I would be here playing. I am happy to be here. I am happy to be in the third round….My physical performance needs to improve. My movement needs to improve. Matches like this help me. Any victory is important for me because that gives me the chance to play another day. That’s what I need, to play matches. I need to compete.”

So he advanced to the third round—though will not play the expected seed, Mikhail Youzhny, who lost to Leonardo Mayer in quick order, 6-2, 6-3. More importantly, Nadal advances one step closer to an eagerly-anticipated meeting with Federer in the quarterfinals, his path eased by the loss of No9 seed, Janko Tipsarevic to Ernests Gulbis, 6-2, 6-0.

The Swiss faced the tricky Denis Istomin, a man enjoying one of his best starts to a season with a 13-6 win-loss run. And although Federer was defending champion and four-time winner in Indian Wells, he came to California without a title this year and on the back of two relatively disappointing runs in Rotterdam and Dubai

His fans need not have worried. He hit the ground running, his blue torso merging into the indigo blue of the court while his white feet flickered across every inch of the surface he likes so much. He broke straight away, and again in the fifth game to take the opener, 6-2.

Istomin was not playing at all badly, but Federer was in near-flawless form, moving well, striking cleanly and eager to take the net at every opportunity. He broke in the third game of the second set, rocketed though his service games, and broke again to close out the match, 6-3, in just 58 minutes.

Federer won 25 of 26 first serve points, 11 from 14 net points and made twice as many winners as errors. Indeed, this was some of his best tennis since the Australian Open. Little wonder he was pleased:

“It felt good from the start…I never thought he got into the match at all. That gives you obviously even more confidence.”

He was scheduled to play an interesting second match against the man who took him apart in the quarterfinals in Rotterdam, Julien Benneteau, but the Frenchman became one in a swathe of seeds who did not make it past their first match. Instead, Federer will face Ivan Dodig, and safe in the knowledge that his opponent in last year’s final, John Isner, was also out of contention.

Isner had a fight on his hands from the word go against veteran scrapper Lleyton Hewitt, one of the select men in the draw to own two Indian Wells titles—a decade ago.

Hewitt, bedevilled by injury and surgery in the last couple of years, had already fought through three sets to beat Lukas Rosol in the first round. He could not hold off the big Isner serve during the first-set tie-break, but he fought back to take the second set and twice pressured the Isner serve in the third before making a vociferous break-through in the seventh game.

The 32-year-old, almost a foot shorter than his opponent, chased, harried, and kept great focus to outlast Isner through a concluding eight-minute game, and took the set and match, 6-4.

Next, Hewitt will meet No18 seed Stanislas Wawrinka—who himself survived a three-set battle—and the winner will advance to a possible Federer meeting.

While Wawrinka survived, many others did not. The most surprising exit came from No4 seed David Ferrer who, despite winning the first set, fell to the big South African Kevin Anderson, who is just back from surgery.

The draining away of seeds in this eighth continued with a near whitewash of No29 Fernando Verdasco by Jarkko Nieminen, 6-1, 6-0, and the loss of No21 Philipp Kohlschreiber to the fast-rising talent from France, Benoit Paire, 6-4, 6-2.

It looked, too, as though the final seed in the segment would also make a first-match exit when No13 Gilles Simon went a double break down, 3-0, in the first set. He went on a tear of six straight games for a 6-3 set, but came under immediate pressure again, losing the second set, 6-3, and then went down a double break again. But with two hours on the clock and facing a 5-1 deficit, Simon went on another six-game tear to steal the match, 7-5.

A near-identical story unfolded in the same quarter, where David Nalbandian, an impressive winner over Marcel Granollers in the first round, took on the huge new talent of No24 seed, Jerzy Janowicz. He lost out in a tie-break first set, levelled in the second but went 5-1 down in the third. The 31-year-old Nalbandian rallied to break back once, but lost the match, 6-3, and Janowicz survived.

So seven seeds fell at the first hurdle in the bottom half of the draw, and only eighth keeping its full number being that of Tomas Berdych, who came through his opener to face Florian Mayer in Round 3.

The bottom quarter, though, retains three of the four former champions playing in Indian Wells—Federer, Nadal and Hewitt—who between them have won eight of the last 11 titles. The fourth of the quartet, Djokovic, will attempt to join them from the top half of the draw tonight.