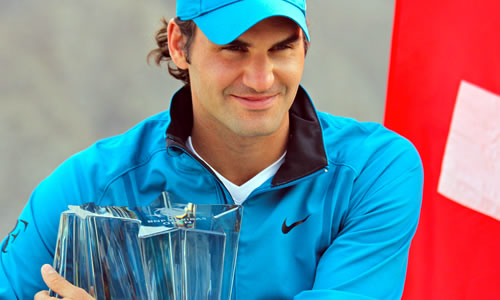 The BNP Paribas Open in the desert oasis of Indian Wells certainly knows how to put on a show.

The prize money is eye-watering—$1m for the winner—for the first, biggest and possibly most aesthetically pleasing Masters of the season. And all these inducements have been rewarded with the finest of men’s draws: every man in the top 40, all but one from the top 50—Radek Stepanek is not back from neck surgery—and only one missing from the top 60—Brian Baker recovering from knee surgery.

But it is with the elite that Indian Wells has enjoyed the best fortune. For the first time since injury took him off the tour at Wimbledon, Rafael Nadal will compete alongside the other “top four” of Novak Djokovic, Roger Federer and Andy Murray.

And the headlines do not stop there. During his absence, Nadal dropped to No5 in the world, earning David Ferrer a place at the top table to head his own quarter of the draw. That put Nadal into the path of one of the top seeds at the quarter-final stages and, as luck would have it, that seed would be the one against whom he had built the longest and most famous rivalry in the Open era, Federer.

Twenty-eight times they have met and 18 times Nadal has won, though the last time, by coincidence, was a win by Federer in the semis of Indian Wells a year ago. But not since their very first match, almost exactly nine years ago, have they met before the semi-finals—a mark of the longevity of their dominance.

There is one more strand that makes this convergence compelling: the ranking of Federer. As defending champion in Indian Wells, he can lose big points if he falls short in the draw, leaving the door open to Murray for take the No2 ranking. If Murray wins the title, he is guaranteed the No2 spot, and if he reaches the final and Federer fails to reach the semis, he also overtakes the Swiss. Suddenly the position of Nadal in the draw takes on a greater significance.

All that could, in the end, be a sideshow to the performance of the world No1. The former two-time champion Djokovic arrives in Indian Wells on an 18 match-win streak dating back to the World Tour Finals in November and takes in the titles at the Australian Open and, last week, in Dubai. He stands little short of 5,000 points clear of the field.

He could meet Murray, who he beat in the Melbourne final, at the semi-final stage, and could then find himself facing either Nadal, another two-time champion, for a 34th time, or Federer for a 30th time. But Djokovic looks, sounds and is playing like the pack-leader and has to be favourite to take his third title here.

Unbeaten thus far in 2013, the top seed is the one to beat in Indian Wells—in a scenario that could unfold in a similar way to his remarkable 2011 run. Then, he won everything from Australia to Rome—and he made no secret, in Dubai, that the French Open was his ultimate target this time round.

Having won against the power game of Tomas Berdych on the fast Dubai courts, his confidence on the slower courts of Indian Wells will certainly be sky-high. His first significant challenge may be a third-round encounter with Grigor Dimitrov, seeded here for the first time after reaching his first ATP final in Brisbane and playing some fine tennis to reach the Rotterdam semis. Djokovic, though, won their only previous match, in Shanghai last autumn, in straightforward style.

The next highest seed in the Serb’s eighth is No14 seed Juan Monaco—a loser in the first round of all three ATP events this season—so a more likely alternate in the fourth round is Sam Querrey, who has been plying his trade on the North American hard courts through February.

But it’s hard to see Djokovic failing to reach the quarters where he is scheduled to meet Jo-Wilfried Tsonga, who he has beaten in their last seven completed matches. The Frenchman has blown hot and cold this year, beating Berdych to take the Marseille title but losing in the first round in Dubai to Michael Llodra. He also has a trickier run to the quarters.

One of the more competitive matches in this section could be in the third round between Milos Raonic and Marin Cilic, and if Raonic comes through, there may be another blood-on-the-court match between the Canadian and Tsonga to match their Olympic record-breaker last year.

One more welcome face in this section is Mardy Fish, playing his first tournament since his absence with a heart condition. He just scraped into the seedings, but with Tsonga, Raonic and Cilic prior to the quarters, his chances here look slim.

Murray may not have played a tour match since his gruelling run to the final of the Australian Open, but he brings with him a 10-1 win-loss record.

Despite reaching the finals in 2009, this has not been a happy hunting ground: Murray lost in the opening rounds in the last two years. This year, he bypassed Dubai to focus on his preparation for the Indian Wells-Miami double-header, where success could take him to No2 in the rankings.

He’s unfortunate, then, to land in the Djokovic half, though his draw in the early stages could be worse. His first seeded opponent may be No26 Martin Klizan—enjoying a career high despite a 3-6 win-loss record this season—followed by either No16 Kei Nishikori or No22 Alexandr Dolgopolov in the fourth round.

Neither man has ever beaten Murray.

The Briton’s projected quarterfinal opponent is Juan Martin del Potro, who won in Rotterdam and reached the semis in Dubai. Nevertheless, with a lot of matches in February, he was suffering from a sore wrist last week. He also has some tough competition in his eighth: Tommy Haas, at 19, has had great runs in San Jose and Delray Beach and may beat Nicolas Almagro—who has spent February on the South American clay—to set up a fourth-round meeting.

Should del Potro reach the quarters—and early rounds also threaten Nikolay Davydenko and Jeremy Chardy—then he seems unlikely to be a match for a fresh Murray, though interestingly, the two have not met since 2009.

Few have deserved the fruits of an Indian summer more than Ferrer: Nadal’s absence gave him his first—and likely only—chance to be Spain’s top man.

This may be his last chance to own a quarter in such a big tournament, too, as he will be only too aware after coming face-to-face with his nemesis in the Golden Swing. Nadal chose to make his comeback on those South American clay courts and the loser, conceding his Acapulco title, 6-0, 6-2, was Ferrer.

In Indian Wells, not only does he have Nadal in his half but also the growing presence of big-man Berdych in his quarter, fresh from back-to-back finals in Marseille and Dubai. Neither Ferrer nor Berdych has made it past the quarters at Indian Wells before: Now one of them has a good chance of doing so.

Ferrer has some strong names to contend with: big Kevin Anderson back from surgery, big Fernando Verdasco—though now dropped to No29—and in the fourth round, Gilles Simon, Philipp Kohlschreiber or the rising Benoit Paire.

The Berdych eighth is also intriguing, especially at the fourth-round stage, with unseeded Bernard Tomic, David Nalbandian and Thomaz Bellucci all proven talents on these courts, and heading towards the challenging Richard Gasquet or Jerzy Janowicz in the third round.

But Berdych is looking a confident, powerful package this season, and ready even to overturn his deficit against Ferrer.

The defending champion is after a fifth Indian Wells title and, should he achieve it, he may regard it as one of his most hard-earned Masters crowns, for his draw is strewn with difficulties.

His campaign is in marked contrast with that of last year, too. Then, he arrived as the title-winner in Rotterdam—beating del Potro—and in Dubai—beating Murray. This year, he arrives without either, and that is not all. In both events, he did not even reach the finals, beaten by Julien Benneteau in the Rotterdam quarters and by Berdych in the Dubai semis.

It leaves him vulnerable to losing his No2 ranking if he fails to win in Indian Wells—and unless he can find his best form with some consistency, he could be severely challenged even before Nadal appears over the quarterfinal horizon.

As early as his opening match, he could face the tall, powerful Denis Istomin, who is on a 12-6 win-loss record this season, or one of several in-form qualifiers such as Daniel Brands, quarterfinalist in Dubai, and Ernests Gulbis, winner in last week’s Delray Beach.

In the fourth round could lie the man who faced Federer in last year’s Indian Wells final, the big-serving John Isner—unless Stan Wawrinka comes through, and the second Swiss took Federer to three sets the last time they played, in Shanghai, as well as reaching the Buenos Aires final a fortnight ago.

But of course it is a Nadal quarter-final that jumps off the page—the only question being the state of the Spaniard’s knee. This will be his first match on a hard court—Madison Square Gardens at the weekend aside—for almost a year. But he built a head of steam through South America to reach a final and win two titles. He has not lost to another seed in his eighth since 2008, though unseeded Marcos Baghdatis, a possible fourth-round opponent, did score his only win over Nadal in Cincinnati in 2010.

In Federer’s favour? He beat Nadal in the semis here last year in straight sets.

Assuming Federer advances to the semis, the picture gets no brighter: Berdych, who has won five of their last eight matches, is likely to be his semi-final opponent—with victories in their last two encounters in the quarters of the US Open and Dubai.

So Federer’s 13th Indian Wells looks decidedly unlucky, despite a 39-8 record and four titles in the desert.