Indian Wells 2013: There is much to play for in the women's draw as Maria Sharapova and company prepare for round four 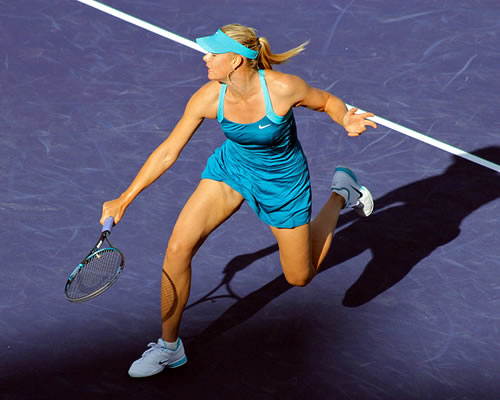 Maria Sharapova is through to round four at Indian Wells Photo: Marianne Bevis

With Serena Williams missing from Indian Wells, and the top of the women’s rankings in such a fluid state—Williams, Victoria Azarenka and Maria Sharapova, have each had opportunities to take the top spot since the Australian Open and remain separated by just 650 points—there is much to play for at the valuable 1000-pointer in the desert.

For while the top spot, taken by Williams at Doha, cannot return to Azarenka in Indian Wells, where the Belarusian is defending champion, it could do so at its sister event in Miami later this month.

Azarenka’s first task is to try to become the first woman since Martina Navratilova, more than 20 years ago, to win back-to-back titles here. And judging from her form in 2013 so far, she must be favourite to do so: She has already defended her Australian Open and Doha titles and remains unbeaten this year—just as she was this time last year.

She started her campaign well against a very tricky opening opponent to whom she had lost twice before, memorably in Doha in 2011: Daniela Hantuchova. Azarenka’s lack of match-play coming into Indian Wells saw her go down 1-4 in the opening set but, quickly acclimatising to one of her favourite surfaces on the tour, she ran away with 12 of the next 13 games to win 6-4, 6-1.

She next plays the No28 seed Kirsten Flipkins and, in one of the few sectors to lose the rest of its seeds, she looks comfortably set up to reach the quarters.

Some of Azarenka’s rivals, though, have found the going rather tougher. At the bottom of her quarter, former champion Caroline Wozniacki took 2 hours 35 mins to win her opener, while the Dane’s next opponent, Elena Vesnina, took the same time to come back from 6-3, 4-2 to win in three. However, two Grand Slam champions, Sam Stosur and Ana Ivanovic, sailed through their first matches and both are potential semi-finalists. Also impressive was the No4 seed Angelique Kerber, the first in the top half to power her way into the fourth round, and still without dropping a set.

However, many of defending champion’s biggest rivals have also jumped the next hurdle into the fourth round. The bottom half of the draw is down to the last eight, with only one non-seed among them, the 20-year-old from Spain ranked 87, Lara Arruabarrena-Vecino. She has taken out two seeds on her way to a meeting with the No2 seed, Sharapova, beating No14 Roberta Vinci from a set down in the process.

But while the Spaniard’s next task will be of a higher order, the 2006 champion Sharapova had more of a battle into the fourth round than she might have expected against the diminutive Carla Suarez Navarro of Spain—though Navarro reached a career-high ranking of 21 last week.

Sharapova, who dropped just three games in her first match, this time squandered an early break in the first set before breaking again in the 11th game. She had to fend off another break point before closing out the set in an hour. She then saved two break points in the second game of the second set before winning four straight games for a 7-5, 6-3 victory.

The 25-year-old Sharapova is bidding to win her first WTA title of the season after semi finishes in Melbourne and Doha.

Further down the road, in the quarters, she is scheduled to face either Marion Bartoli or one of the players of the last 12 months—and in particular of this season—the small bundle of energy that his Sara Errani.

The Italian woman broke into the big time, and her highest ever ranking, last year by reaching the final of the French Open and then the semis of the US Open. Her diversity of skills, honed with an outstanding doubles record, showed in her results this year, too, with a final finish in Dubai followed by the title in Acapulco.

She hit a big milestone in the third-round at Indian Wells, becoming the first player on the WTA tour this year to reach 20 match wins. Seeded No6, Errani came out strong, winning the first two games of the match to love and, after an hour and 21 minutes, broke serve to complete a 6-3, 6-1 victory over Johanna Larsson.

One of the players who could match Errani’s win tally at this tournament is third seed Agnieszka Radwanska. She survived an even more testing third-round match than Sharapova, battling from a set down to beat No27 seed Sorana Cirstea 6-7, 6-3, 6-4 in two hours 30 minutes.

The Pole, who had also lost only three games in her opener, dropped serve four times before improving her match-record for 2013 to 19-3, including back-to-back titles in Auckland and Sydney. She has another tough match ahead, though, the No13 seed Maria Kirilenko.

The petite Russian took even longer—two hours 44 minutes—to make it past American qualifier Mallory Burdette, and that on top of a three-setter against Christine McHale in her opener, will surely test her fitness. Add in that Radwanska leads Kirilenko 6-2 in their head-to-head, including their last five matches, and the Pole should advance to what might be the quarter-final of the women’s tournament.

Fifth seed Petra Kvitova, one of the pre-tournament contenders to deprive the top three seeds of the title in Indian Wells, has not enjoyed plain sailing either. She was pushed to three tough sets in her opener and then survived a second-set tie-breaker against Ukrainian qualifier Lesia Tsurenko, 6-2, 7-6, in 90 minutes. The Czech broke serve four times but had squandered 10 chances on her way to victory.

It took Kvitova to a seven-match winning streak, having won the title in Dubai two weeks ago, and she finds herself in the fourth round at the Indian Wells for the first time in five visits.

Her win, like Radwanska’s, keeps alive the chance of one of the most highly anticipated matches of the draw. If Kvitova and Radwanska get through one more match, they will face each another… a mouth-watering prospect, as they have split their last two matches, both on hard courts, in the last five months.

Bartoli, for her part, is one of the few top-10 players to reach the fourth round without dropping a set or facing a tie-break. She overcame a slow start, 0-4, to defeat the former Grand Slam champion, Svetlana Kuznetsova, 6-4, 6-3.

The French woman, now under the tutelage of Jana Novotna, has reached the final of Indian Wells before, losing to Wozniacki in 2011. She is looking strong, confident and dangerous, so despite the fact that Errani beat her in their last two matches in 2012, she may be the one to face Sharapova in the quarters.

Bartoli has never beaten the Russian, while Sharapova’s likely semi-final opponents have. Radwanska won in Miami last year, while Kvitova—well her victory over Sharapova dates back to Wimbledon 2011, a memorable encounter indeed.

Whether any of them can hold back Azarenka remains to be seen, though the top seed has yet to follow Kerber and Nadia Petrova—who also advanced quickly into the fourth rounds in straight sets—before she can anticipate the championship match. With a maximum of three non-seeds among the last 16, it will certainly not be an easy ride.