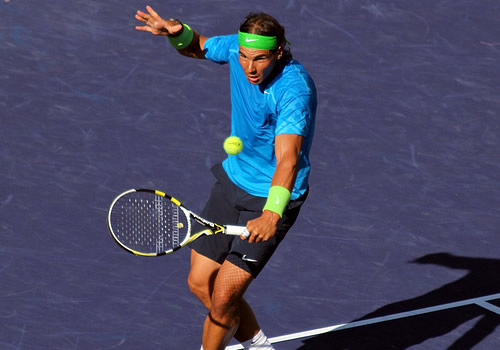 Rafael Nadal came from a set down to beat the Argentine Photo: Marianne Bevis

Perhaps for the fans of both men who took to court on the final day of the BNP Paribas Open, it had been a case of hope over expectation that they would survive the tough draws ahead of them.

However, Juan Martin del Potro put out Nikolay Davydenko, No19 seed Tommy Haas, came back from a set down to beat the No3 seed, Andy Murray, and finally played his best match of the year to beat 2013’s only unbeaten man, world No1 Novak Djokovic—not just from a set down but from 3-0 down in the final set as well.

His last two matches on two straight days had taken a total of more than five hours, in 100 degree heat, but his game, mobility, fitness—and his forehand—looked close to the pre-surgery form that had taken him to the US Open title in 2009.

Now he had another of the ‘big four’ to overcome, a man who had beaten him seven times in 10 matches. His record against Rafael Nadal was split 3-3 on hard courts but the Spaniard had won two of those here at Indian Wells.

For Nadal, four-time finalist and two-time champion in the desert, and a man in pursuit of a record 22nd Masters title, it may not have been a surprise to see him come through Ryan Harrison, Ernests Gulbis, and even No2 Roger Federer and No7 Tomas Berdych—except that this was his first return to hard-court competition since last year.

He had reached three clay finals this year, winning two, but despite a career-best start to a season, many doubted he could so soon make an impact on hard courts.

His resounding 6-4, 7-5 win over Berdych in particular disabused them and he became the favourite—despite not winning a hard-court title since Tokyo in 2010.

He opened with the same intensity that had beaten Federer and Berdych this week. He attacked, whipped his forehand, served heavy and deep, and more than once rushed to the net for the kill.

He held and quickly applied the tactic that he hoped would break down his opponent. He pummelled away at the backhand—for with a sore left wrist, del Potro has had less venom on that wing—to work an open court and make his signature forehand winner down the line. Three times he did it, worked three deuces and three break points, and broke to lead 2-0.

Del Potro looked down the barrel of the gun in the fourth game when a double fault took him to 0-40, but now the forehand revved up which, combined with an ace, saved the game. Gradually his legs and right arm worked off their stiffness, and he fired more missiles to earn break point. A final blur of a forehand angled acutely away from Nadal won the break back and brought the crowd to it feet.

At 4-4, they stood at 28 points apiece, but then the first time, del Potro began to edge ahead. He hit a string of forehands to both corners—one winner touching 90mph—that simply outpaced Nadal’s racing defence. He earned two break points, and an overhit forehand from the Spaniard conceded the break.

Now del Potro was serving from the difficult end, into the sun. He still went up 40-0 but Nadal urged himself on to make a couple of extraordinary gets of the Argentine’s forehand, but del Potro held with a volley winner to take the set, 6-4.

On paper, there was little between them: 11 winners to nine, 12 errors to 14 in del Potro’s favour, but the momentum was with the ‘Tandil tower’.

Nadal looked wary as he opened serve in the second set, no longer sure where to go to beat his opponent’s great stride and long reach. Del Potro pressed home his advantage with a break courtesy of a Nadal forehand into the net.

Nadal, now 2-0 down, urged himself to greater effort, strode around the baseline between points and generated more intensity. Helped by a ragged service game from del Potro in the sixth, he got the break to level and went on the offensive. Now the strut was back, the fist pumped, the scowl was firmly in place.

No wonder del Potro looked worried. He missed some first serves, found the net with a couple of forehands and crucially, in the eighth game, double faulted to offer up a break point. Forehand against forehand, it was Nadal who attacked the net to smash the winner for the break and he served out with panache, 6-3.

The matches of the last couple of days began to weigh heavy in del Potro’s legs and shoulders. His forehand delivered less penetration and pace while Nadal’s forehand was on fire. As the Argentine’s first serve missed more often, Nadal’s defence grew in intensity, scoring return winners on both wings.

Del Potro faced several break points before holding the opening 10-minute game of the final set. Nadal, now playing almost flawless tennis, held in under a minute and half to love.

The Spaniard, in fact, looked as though he had only just begun the match: bristling with energy, dancing all over the court, resisting with his backhand, firing winners at will on his forehand. It forced error after error from an exhausted del Potro and Nadal broke in the third game. Unless the Argentine could find a third or fourth wind, this would be over quickly. He could not, and it played out with a ruthless certainty.

Del Potro managed to hold his remaining serves, despite intense pressure at 3-5, 0-40 down. With his last dregs of his energy, he took five straight points to hold, but could not break back. Nadal took set, match and title, 6-4, his return to the top table complete.

For the win takes him back to No4 in the rankings, and also a step ahead of Federer in Masters titles to a record 22. In a timely coming together of statistics, it also takes Nadal to his 600th win. 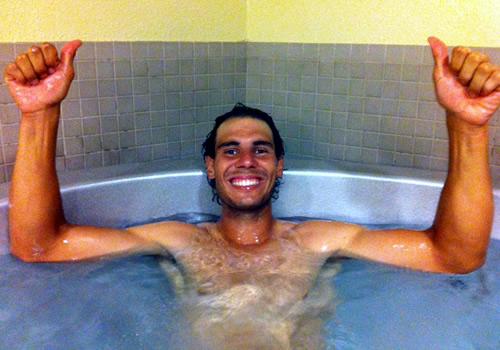 Nadal posted this picture of himself on Facebook after his win over Del Potro (Photo: Rafael Nadal/Facebook)

He announced to the gathered crowds that after such a tough seven months away from tennis: “This is one of the most emotional trophies of my career.”

One suspects there will be many more to come, though not at next week’s Masters in Miami. After winning 17 of 18 matches and three titles in six weeks, his withdrawal from the Sony Open is no surprise.

In any case, just over the horizon are four clay titles to defend, including the French Open—and few will now bet against him increasing his tally of titles from most of them.