Indian Wells 2013: Rafael Nadal impresses on the way to a 6-4 6-2 victory over Roger Federer in the quarter-finals 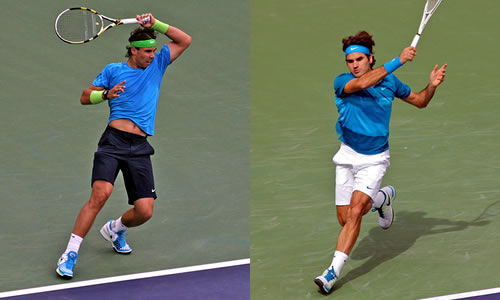 There has always been something special about these two, ever since they first met almost a decade ago.

Few will recall that match, an early round in Miami: Roger Federer already world No1, the teenage Rafael Nadal a lowly 40—but the new kid on the block stormed the win, losing just six games.

One year later, they met for a second time, and in the same place. Now it was the final, and this time Nadal was just months from taking the No2 ranking that the young pretender would hold behind Federer for more than three years. The match took three and three-quarter hours and five sets—two of them tie-breakers—before Federer won the 2005 Miami title. It marked the true beginning—and set the tennis standard—of the rivalry of a generation.

Never again would they meet anywhere short of a semifinal. Indeed 17 of the next 20 meetings were finals. When it was clay, Nadal dominated, where it was grass or hard courts, the honours more often went to Federer. They won 24 of 28 straight Majors and shared the top two ranking spots for year upon year, and yet fans seemed never to tire of their dominance.

For everything about the rivalry has always been compelling.

In style of play, they complement and contrast, different as Arctic and equator, Mozart and Gershwin, Astaire and Kelly, but in combination greater than the sum of their formidable parts.

In looks too, they are as night and day: Federer slender, angular, fluid, and silent; Nadal with an explosive, muscular physique, volume set to high. Their signature shots capture the contrast: Federer’s graceful, single-handed backhand a thing of beauty and, on song, as deadly as a snake strike, while Nadal’s huge lasso of a top-spin forehand leaps on his victim like a charging bull.

Each has forced the sinew of the other, tested the tactics of the other, and probed the fortitude of the other. Yet through it all they have evolved a strong relationship both on and off court.

And so, when they were drawn to meet one another for a 29th time in Indian Wells, the buzz began. Here was Nadal’s first hard-court tournament in a year, his first since his return from injury. Here was the duo’s first meeting since this very tournament last year. And, here was their first meeting outside the last four since that first time in Miami.

The fears had all been about Nadal’s condition, how he would cope with the return to hard courts. But by the time they came to play, he had dispelled most of those concerns and the spotlight was instead on the condition of Federer, who had picked up a back injury in his second match.

Already the Swiss had shown in his gutsy three-set win over Stan Wawrinka that things were far from perfect. His movement to both wings was inhibited, his serve lacked its usual venom, his eagerness to rush the net dampened. Helped not a little by a huge error count from his opponent, he hung in for the win, but it quickly became clear that he did not have enough to counter Nadal.

Federer faced deuce on his opening serve, 0-30 on his next serve and break point on the third. Tactically, it was fascinating, with Federer focusing on the Nadal backhand and drawing enough errors to stay afloat.

Nadal, too, looked cautious, took time to adjust to the big, looping balls hurled to his baseline corners and angled across his sidelines. But the balance began to tip the Spaniard’s way as Federer struggled to defend his fourth service game, slipping from 40-15 to break point as Nadal’s rhythm and pace off the ground picked up.

Federer seemed unable to lunge to his wings—where Nadal now focused his attention—and attempted instead to cut off the ball at the net. Twice he approached without any real penetration and Nadal passed him with consummate precision to break.

Nadal increasingly became the attacker, pounding winners past a Federer showing little defensive resistance. The Swiss held off two break points at 3-5 but Nadal served out the set, 6-4, having scored 11 winners to Federer’s eight with half as many errors.

The second set opened in similar fashion, an easy break of Federer’s serve as he fluffed an easy volley. Nadal broke again to lead 3-0, but Federer seemed briefly stung into action. Offered a couple of second serves from Nadal, he went on the offensive with his forehand to earn two break points and reduced the gap to 3-2.

But the attack was short-lived. With each game, Nadal’s groundstrokes seemed to pick up weight and depth while his defence withstood the Federer flurry. As errors mounted on the Swiss side—13 off each wing—they all but disappeared on the Spanish side—just three thus far in the set.

More errors brought up more break points against the Federer serve—the Swiss face devoid of emotion even after a dreadful volley error—and Nadal went on to serve out the match, 6-2.

Federer was subdued, and Nadal reflected that mood—no characteristic fist pump or “vamos” celebration. Simply the question “is everything OK?” and a shrug of the shoulder and a “Nah, I’m fine” from Federer. And there it was, the rivalry that has set the standard for others to follow.

Both showed the same mutual respect afterwards. Nadal admitted that his game was improving with each match: “I played a fantastic first set. The second set was strange. Roger didn’t fight as usual. Probably he had some problems and he didn’t feel comfortable enough to keep fighting.

“[But] if I think that I am better than him because I beat him 19 against 10, I will be very stupid and very arrogant. This is not the case.”

Federer admitted he was not completely fit, but added “I could play, it was the same as against Stan: It’s obviously a small issue but that doesn’t work against a guy like Rafa.”

He also explained his attempt at changing things up in the second set: “The longer the match went on, I realised I had to change up my game. I played differently than I was hoping to be able to…He got more comfortable as the match went on. Obviously, once I was down a set I knew it was going to be difficult.”

But he drew a line under any discussion of his back “because I don’t like to undermine his performance, either.”

And so this much-hyped quarter-final failed, perhaps, to produce the tennis of so many of their encounters. Compared with the match that resulted in a near-identical score-line in last year’s semi, it lacked the ‘wow’ factor when both are in full shot-making mode. And compared with the near-identical score of that very first match, nine years ago, it also lacked the ‘shock’ factor, of youngster taking down the master.

Their next match will most likely come on clay. Federer is next scheduled to play the Madrid Masters, though he admitted he needed to talk with his team about whether that would remain the case. But judging from Nadal’s fast-recovered form, his nimbleness and increased power off the backhand, he will be harder to beat than ever on his favourite surface.

Nevertheless, wherever and whenever the two face one another across a net again, one thing is certain. There will be a buzz about this very special rivalry.

Nadal will next play No6 seed Tomas Berdych, who beat Kevin Anderson 6-4, 6-4, and has yet to drop a set in the tournament.

If Andy Murray beats Juan Martin del Potro and either Novak Djokovic or Jo-Wilfried Tsonga in the semis, he will move past Roger Federer into the No2 ranking.