Indian Wells 2013: Rafael Nadal admits that missing the London 2012 Olympics was a "sad moment" for the Spaniard 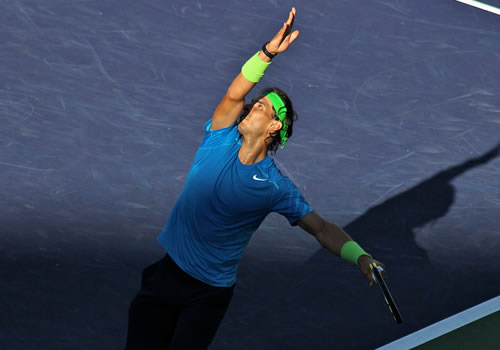 Rafael Nadal admits that being forced to pull out of the London 2012 Olympics was a “sad moment” for the Spaniard – but insists he had no choice.

The former world No1 was forced to take a lengthy break following his second-round defeat by Lukas Rosol at Wimbledon as he struggled with tendinitis in his left knee.

Nadal missed the second half of last season and only made his return to action after this year’s Australian Open.

And the 27-year-old, who is preparing to test his knee on the hard courts of Indian Wells this week after lifting the Mexican Open title last weekend, was bitterly disappointed to miss last summer’s Games.

“The hardest one was the first one, [missing] the Olympics. When I had the decision, I had to take it,” Nadal told reporters. “I didn’t have another choice. It was a tough decision.

“I didn’t get to [carry] the flag in the ceremony, representing all the sports and competitors. It was a sad moment for me. These kinds of opportunities aren’t forever.

“There may only be one in a lifetime. I lost that opportunity. But all I can do is be positive, keep working and try to be in Rio in 2016.”

Nadal is looking forward to see how his knee responds at the California tournament.

“I feel very good. I’ve practised two times here,” said Nadal. “But seriously, I understand my situation after seven months. I think it’s not the right moment to talk about the knee. I am here to try my best and that’s what I’m going to try.

“We’ll see how the knee responds on hard. The results on clay were positive, especially because the knee was feeling better and better every week, especially last week. Now I’m going to try here.”