Indian Wells 2013: Can Tomas Berdych beat Roger Federer and Rafael Nadal to claim his first title of the year? 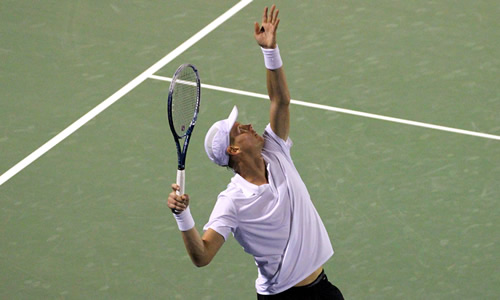 Tomas Berdych is through to round four at Indian Wells Photo: Marianne Bevis

Admirers of the men who were in third-round action at the BNP Paribas Open may have felt the earth tremble beneath their feet in the oasis in the desert, but it had nothing to do with the sultry looks of Rafael Nadal or the chiseled cheek-bones of Roger Federer. It was, in fact, a small earthquake that had rocked their worlds.

This being hot and laid-back California, the rumble that shook Indian Wells disrupted the tennis schedule not one iota—and it was some schedule. The bottom quarter of the draw alone boasted three former world No1s, each of whom was also a multiple champion of this very tournament. Along with Federer and Nadal was veteran Lleyton Hewitt and, between the three of them, they laid claim to eight of the last 11 titles in the desert and a total of 486 weeks at the top of the rankings.

Nadal and Federer were both lined up against unseeded men while Hewitt was himself unseeded. Should all three win, Federer and Hewitt would next face one another for a tantalizing 27th meeting in a rivalry dating back almost 14 years. But in the event, it was Federer’s compatriot Stan Wawrinka who survived the dogfight with Hewitt at the end of the day’s play, 6-4, 7-5, though the performance of the 32-year-old Australian, back after his fifth bout of surgery, bodes well for 2013.

But back to the beginning. The hoards that gathered in this sun-drenched tennis garden to embrace Nadal’s return to tennis’s hard courts for the first time in a year did not, as they may have hoped, feel the earth tremble twice in one day. The Spaniard did no more than practise for a match that did not happen: His opponent Leonardo Mayer withdrew injured.

It was down to defending champion Federer to keep the pulse racing and the flames fanned, and he appeared suitably attired. Banished was the lapis blue of his first match, to be replaced by flame red—and his muscular opponent, Croat Ivan Dodig, joined the party in complementary hot yellow.

Dodig, who had already done Federer the favour of taking out Julien Benneteau, the man who beat the Swiss in Rotterdam, is a powerful, clean-hitting striker of the ball and showed some deft movement around the front of the court in the first set.

Initially, Federer looked decidedly shaky, opening with a double fault and going 0-40 down, but five straight points restored some order and the opening game.

Dodig continued to pummel the Federer backhand and drew a few early errors, but his first serve let him down badly, barely breaking 30 percent—though Federer’s was far from outstanding at around 50 percent. Both seemed to struggle with the low trajectory of the sun and the stretching shadows, but it was Dodig who first conceded his serve, with a double fault in the eighth game.

He pushed Federer to deuce with a great mix of drops, lobs and full-blooded forehands, but the Swiss serve held off the attack to take the lead, 6-3.

Federer quickly broke in the opening game of the second set, and again in the third, as the Dodig firepower made fewer inroads on the Swiss game. Federer raced to 4-0 but then, serving in sixth, he visibly pulled up with back strain.

Against another player, it may have spelled disaster: Federer’s service motion was inhibited, as was any shot involving a stretch. But he was still able to wield his right arm with venom and, helped by a growing error-count from Dodig, that was enough: He closed out the match in around an hour, 6-1.

His celebration was more muted than the Indian Wells faithful have come to expect, but Federer admitted afterwards: “It’s been a very eventful day: little bit of an earthquake in the morning, playing an opponent I’ve never played against, the sun coming nicely from the side in your eye, and the stands all shiny—didn’t see the ball so well. So it was a tough day.”

Then he added: “Yes I felt a little something in my back at the end. I just have to check it out and hope I’ll be fine for the next match… I’ve had a back issue for quite some time, today it flared up a bit…I’ll definitely do treatment like I do every night anyway.”

He has a day’s break to recover, but as one of only two men in the top 10 yet to win a title this season, it is a concern—especially with an in-form Wawrinka and a rested Nadal lined up ahead of him.

But what of the other top-tenner without a title in 2013? He is Tomas Berdych, a man who has hovered just a couple of places below the ‘big four’ since he beat Federer to reach the final of Wimbledon in 2010.

Berdych did the same at the US Open last autumn, where is went on to push Andy Murray hard in the semis. He took a set from Novak Djokovic in the quarters of the Australian Open and then reached the finals of Marseille and Dubai. In the latter, notably, he beat Federer yet again—and on paper at least, has run up better results than the world No2 this season.

It is perhaps significant, then, that he is lined up in Federer’s half in the first Masters of the year—and has seen the only seed above him in his quarter, David Ferrer, knocked out at the first hurdle. And unlike Djokovic, Murray or Nadal, the big Czech has neither dropped a set nor faced a tie-break in winning his two first matches.

Despite all this, Berdych has remained as far under the radar as to be almost invisible at Indian Wells. He has not yet played on centre court and, while the crowds have crushed around each Nadal, Federer and Djokovic practice session, Berdych yesterday warmed up in splendid isolation on an outside court ahead of his 68-minute defeat of the No27 seed Florian Mayer. Most telling of all, his win did not draw a single reference on either the ATP or the tournament websites—other than to report that Richard Gasquet would play him in Round 4.

One senses that the maturing Berdych, a 6ft 5in powerhouse of a man, is fairly content with it all. He is not an attention seeker and not voluble in press conferences, though he is articulate, business-like and shows occasional glimpses of a dry wit.

In many regards, there is something of the absent Robin Soderling about him. The son of professional parents, clearly intelligent, unwilling to suffer fools gladly, the Czech has taken time to build the body, train the concentration and accept the multitude of off-court demands.

But at 27, Berdych seems now to be reaching his physical peak, with thighs that put even Murray’s to shame and a self-confidence born of consistently strong results and a belief in both his stamina and focus.

In Dubai, having reached two finals in back-to-back weeks, I asked about that physical fitness: “I still feel pretty well. I mean, nothing hurts in my body, and especially after every single match that you win, you know, you get the extra confidence that just puts all the tiredness out…Yeah, I feel really good.”

This week, he even admitted to being a bit off-colour: “A bit of flu in the cold weather at the start. In the first set [against Mayer] I was able to get a good rhythm and play how I wanted to play, and in the end it was a quite solid win.”

He also found a positive spin over facing and overcoming early break points: “Everyone can hit a forehand and backhand, but if you get tight point situations, if one player is mentally stronger or he’s able to deal with the situation better, it makes a huge difference.”

It does indeed, and so does the putting on of points. Berdych is defending only 135 of them in Indian Wells and Miami together, so he is well placed to reduce the gap between himself, Ferrer and the “big four”.

Perhaps, then, 2013 may see him break into the top five for the first time—and even, perhaps, the top four.

But that, ultimately, may come down as much to Nadal’s knees, Federer’s back and, in the short term, his next opponent—the almost-as-low-profile Gasquet—as to the power of Berdych’s ever-expanding legs and confidence.