Indian Wells 2013: Haas and Fish shine through age and adversity

Indian Wells 2013: Tommy Haas makes it through to round four, while Mardy Fish is edged out by Jo-Wilfried Tsonga 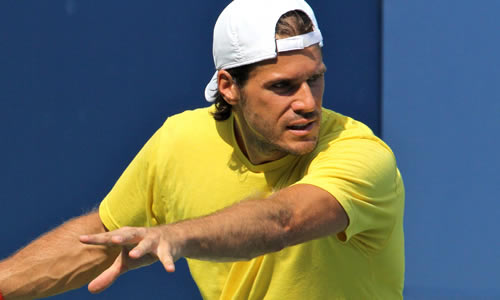 There were no more earthquakes in Indian Wells as the top half of the draw embarked on their third-round matches, but there was enough fire-power to make the ground tremble beneath the feet of those who stood in the paths of the four top-eight men with their eyes on the quarter-finals.

Twelve seeds remained in this half, spearheaded by the power-packed Australian Open and year-end champion, Novak Djokovic, and the US Open and Olympic champion, Andy Murray. Following them into the fray were heavy-weights Juan Martin del Potro and Jo-Wilfried Tsonga—both title-winners in 2013

But as the searing heat of the day unfolded and the violet shadows stretched their fingers across the deep blue courts, it was amongst the more lowly-ranked and higher-aged men that the greatest entertainment emerged.

First was home favourite Mardy Fish, barely making the seedings after seven months away from tennis as he tried to overcome, for the second time in a year and half, a heart condition.

Now aged 31, he won his first match since the US Open in three-sets over countryman Bobby Reynolds, but came into his second match against Tsonga in a reflective mood: “It’s been a while tennis wise, and it’s been a while emotionally, as well, to step away from the game for that long… so it’s nice to out there playing for something, playing in the sun…It’s certainly rewarding to know that, if I’ve not already beaten it, I’m close to beating it. Close to getting it back, and getting my life back. I don’t envision it going too far as much as expectations are concerned.”

Fish was right to limit his expectations. Tsonga had beaten him in all three meetings, though the last time, at Wimbledon last year, it was four tight sets. The Frenchman, though, had subsequently taken on new coach Roger Rasheed and looked more hungry and more focused than ever—as his five-set quarterfinal tussle with Roger Federer at the Australian Open showed.

But this would become one of the most tightly contested matches of the day. It took almost 20 minutes and some glittering rallies to get through the first four games, with several break chances for Fish.

In the heat of the midday sun, it took half an hour to reach 3-3 and an hour to reach a first-set tiebreak in a top-notch set full of all-court skills. They chased down drop shots, made volley winners and joined in the occasional debate about time between serves. Fish, in a jokey aside, pointed out that he needed a little extra time because he had a heart condition.

The tie-break was just as delightful, full of pace and variety, and it was Fish who took the first mini advantage, but an overhit forehand and a couple of big Tsonga serves gave the Frenchman four straight points and the set.

For a man absent for so long with health problems, Fish kept up with the fleet-footed Frenchman every step of the way, even though his first serve was firing at a scant 50 percent. He went straight on the attack at the start of the second set, chipping and charging off his own delivery and taking on Tsonga’s to break twice for a 4-0 lead.

The crowd was audibly thrilled with the showcase tennis on display—an angled volley here, a drop-shot winner from the baseline there—but the question remained: Could the Fish stamina live with Tsonga?

Sure enough, Tsonga broke back twice, hitting deep and wide angles, making the occasional ghost to the net, and levelled 4-4. Still Fish was not done, and he broke again with the finest of cross-court volleys.

Now, though, Tsonga upped his game and tore through the points with focus, determination and some flamboyant skill, breaking Fish back to love. With the clocked ticking to two hours, they played another tie-break, but the Tsonga rush continued, and he finally sealed the win, 7-0.

Tsonga’s next match against Milos Raonic, who took three sets to beat Marin Cilic, should produce fireworks: Their only other meeting resulted in a 25-23 third-set win for Tsonga at the London Olympics. But this more focused Tsonga, who combines firepower with all-court flair, will take some beating.

As for Fish, Indian Wells was a perfect stage for his memorable return. He played some high-quality tennis and coped with the heat and the pace of his top-10 opponent. He may not come into his own until the tour returns to the North American hard courts after Wimbledon—clay is far from his favoured surface—but he will be a welcome member of that US Open swing.

For entertainment value, this match would take some beating, but many expected the second meeting between Djokovic, unbeaten this year and looking supremely confident, and the one who many have predicted will be a future top-five player, Grigor Dimitrov, to crackle.

The tall, dark and handsome 21-year-old from Bulgaria has taken time to mature into his undoubted and varied skills, but reached his first final at the start of 2013 in Brisbane. That, and strong run at Rotterdam, took him inside the seedings, at No31, for the first time.

Even so, few expected Dimitrov to open quite so strongly. He began with two love service games, broke Djokovic in the fourth, and held for a 4-1 lead. It reduced the packed arena to hushed whispers as the top seed sprayed errors—already 13 of them—in the face of fast, aggressive play.

Gradually, though, Djokovic recalibrated, found his timing and reeled in his opponent. Come the ninth game, and attempting to serve out the set, Dimitrov was gripped by nerves, hit one ace but double-faulted four times to hand Djokovic the break back.

They headed to tie-break where, once again, the experience and confidence of Djokovic took Dimitrov’s game by the throat and he took the set, 7-4. Djokovic had made the same number of winners as Dimitrov, just eight, but also hit 19 errors to his opponent’s 14. Just one point separated them in the set, yet it now felt as though Djokovic was in total control.

As the second set got under way, the Sky commentary team made a telling remark: “The next half hour will tell us a lot about Dimitrov’s mentality. The last thing I want to see him do is just capitulate in the second set.”

Unfortunately, it was not entirely in Dimitrov’s hands. The shackles had dropped from Djokovic, and he now slotted his ground strokes with clinical precision into Dimitrov’s baseline corners to force a break in the second game. The Bulgarian’s tennis, even the basics, folded under the pressure, and Djokovic went on a 23-minute blitz to take the match, 6-1.

The Serb summed it up: “I haven’t done much really in the match in the second set when I made two breaks. It was all of his unforced errors, so I just needed to hang in there and try to be patient.”

He now takes his 15-0 unbeaten run into the fourth-round against Sam Querrey, who edged the unseeded Marinko Matosevic in the longest match of the tournament so far, 7-6, 6-7, 7-5.

As the Djokovic-Dimitrov match rushed to its conclusion, an altogether more gripping and high-quality encounter was entering its final set on a packed Stadium 3.

This one was between the evergreen and popular veteran, Tommy Haas—enjoying a wave of form that has taken him from 169 a year ago into the top 20—and the No11 seed, the firey and unpredictable Nicolas Almagro.

Both men boast show-stopping single-handed backhands, big serves and not a little passion on court. Both, too, were enjoying late-career success. At 27, Almagro has been a constant in the top dozen for the last two years, and although all 12 of his titles have come on clay, he is no mean force on hard courts—he started 2013 with a quarterfinal run at the Australian Open.

Haas, though, won all but one of his 13 titles on hard or grass courts, his first 14 years ago in Memphis.

Twice he has earned the Comeback Player of the Year accolade from his fellow players, most recently last November. He was out of tennis from February 2010 to May 2011 following hip surgery, the latest in a catalogue of surgery and injury problems as well as a near fatal accident that almost claimed the lives of his parents in 2002, the year he reached No2 in the world.

Last year, he recorded his 500th match win and his first title in three years, and this year he had already reached the semis in Delray Beach and the final of San Jose.

It was Haas’s prowess on hard courts that immediately showed through, as he sliced and volleyed his way to the opening set, 6-3.

Almagro, not to be outdone in the aggression stakes, powered and roared his way to the second set in a tie-break, and when he broke for the chance to serve out the match at 5-4, it looked as though the Spaniard would reverse his three-set defeat to Haas in Shanghai last October.

But Haas, facing break point, turned on the heat from his great swing of a backhand to fire one more ball onto the line and broke back. He then powered through the tie-break, 7-2.

For the extrovert German, then, age and injury seem nothing but incentives: He looks fresh, eager and full of tennis. But his next match will be a bigger test still, against Juan Martin del Potro, who defeated another ‘veteran’ in the 33-year-old Bjorn Phau, 6-2, 7-5. The Argentine, seeded No7, is on a 13-3 run, highlighted by the Rotterdam title, and will be favourite to progress to a quarterfinal meeting with Andy Murray, who had no problem beating Yen-Hsun Lu, 6-3, 6-2, in 88 minutes.

Murray’s next match should also pose few problems: It is against yet another 30+ man, the 85-ranked Carlos Berlocq, who has never reached the quarters of a Masters event before.

Murray has yet to face a seed but, assuming he beats Berlocq on Stadium 2 tonight, the road will become far tougher for the man looking for his first Indian Wells title—most likely del Potro and Djokovic for starters.