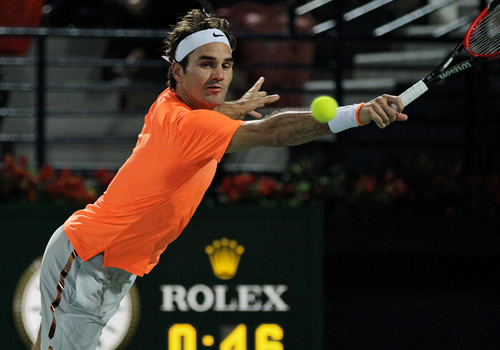 Three weeks after the announcement of one of tennis’s most hoped-for changes of heart—Serena Williams returning to Indian Wells after a 14-year absence—the biggest tournament outside the Grand Slams in Indian Wells celebrated another announcement.

For the first time in its 40-year history, the BNP Paribas Open at the stunning Tennis Garden in Desert Springs California has been awarded the ATP World Tour Masters 1000 Tournament of the Year.

Last year, the 96-draw tournament that boasts one of the biggest purses in tennis, unveiled its state-of-the-art, 8,000-seat Stadium 2, extra practice courts and new shading structures to protect players and fans from the intense light and heat of the oasis in the desert. The event was rewarded with a record of more than 4.31K fans, the highest-attended event on the ATP tour.

But since Williams won the title in 1999 as a 17-year-old against Steffi Graf, and then again in 2001, while still a teenager against Kim Clijsters, she has not played at the prestigious Premier Mandatory—one of only four on the women’s tour.

The reasons are mired in controversy, but stem from some booing in the crowd at that 2001 final. The reasons have never been clear but ranged from disapproval when her sister Venus pulling out of her scheduled semi against Serena, to accusations of racial slurs. Their father Richard Williams later asserted in USA Today that he thought the crowd’s reaction was racially motivated.

So despite repeated fines from the women’s tour, both sisters have refused to return. However, while Venus is not scheduled to play in 2015, Serena is.

The 19-time Grand Slam champion announced via an interview with Time magazine that she was ready, at the age of 33, to let bygones to be bygones, and has accepted a wild card when the tournament gets underway in mid-March.

As Roger Federer pointed out here in Dubai, which picked up the ATP World Tour 500 award for a seventh straight year and 11th time overall, Williams’s decision has been a brave statement: “I understand it was a big deal for her, but it’s nice to see that she’s moving on. Would she have played the last 14 years, she probably would have won at least five, 10 times. Maybe cost her many weeks at world No1, to be quite honest, if you would have added those 500 or 1000 points throughout.

“So it was a big sacrifice from her side and I think it’s nice to see her back at Indian Wells, I must say.”

Serena’s reason was, in the end, simple: “It is with love in my mind, and a new understanding of the true meaning of forgiveness, that I will proudly return to Indian Wells.”

And to make even more of a statement, Williams will be partnering the Equal Justice Initiative, a private, non-profit organisation that provides legal representation to indigent defendants and prisoners who have been denied fair treatment in the legal system.

She will welcome one fan the trip of a lifetime to Indian Wells, as her personal guest, and to stay in one of the desert’s luxury hotels: All they have to do to be in with a chance is to donate at least $10 to the cause.

Her return, just as significantly, will be marked a series of YouTube video journals featuring the world No1’s journey at Indian Wells.

Bygones have indeed become bygones, it seems—and that can only be good news for fans of one of the greatest ever to play this sport. And how timely that Indian Wells should also, finally, win the Tournament of the Year trophy.

Winners of the Tournament of the Year Awards are chosen by ATP players. Indian Wells, Dubai and The Queen’s Club in London have won, respectively, at the Masters 1000, 500 and 250 levels.