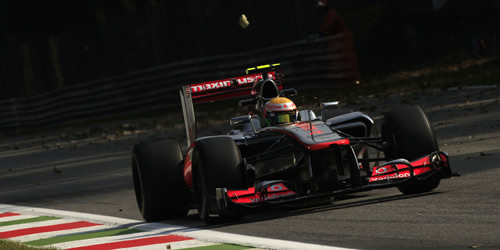 McLaren’s Lewis Hamilton topped the timesheets in second practice for Sunday’s Italian Grand Prix in a closely-fought session at Monza.

The British driver, whose future has been in the spotlight in recent days as he continues to be linked with a move to Mercedes, edged out his team-mate Jenson Button by just 0.038 seconds.

The Ferraris of Fernando Alonso and Felipe Massa were third and fourth but the session turned to misery for the Spaniard when he suffered a gearbox problem.

The Italian crowd were treated to a wealth of action in the first hour of second practice, with the fastest time dropping as drivers were finding the limits of the track.

As had been the case in first practice, the chicanes at turns 1 and 3 were proving a problem, with many drivers unable to slow down enough so had to take the escape roads. Narain Karthikeyan and Vitaly Petrov both had trips through the gravel trap at turn 5 after running wide.

With 30 minutes remaining in the session, Alonso, having suffered an engine problem at the end of first practice, was forced to crawl back to the pits with a gearbox problem. The championship leader took no further part in the session and lost valuable mileage, completing the least laps of any driver.

Teams started high fuel runs in the last 30 minutes of the session, with the sole remaining Ferrari of Felipe Massa looking particularly impressive.

Red Bull drivers Sebastian Vettel and Mark Webber both had a low-key day, finishing outside the top 10, on a track which historically has not favoured their car.

Earlier, Mercedes’ Michael Schumacher had set the pace in the first practice session.