Italian Grand Prix 2013: Sebastian Vettel admits his delight at claiming pole at Monza and is eyeing a successful race on Sunday 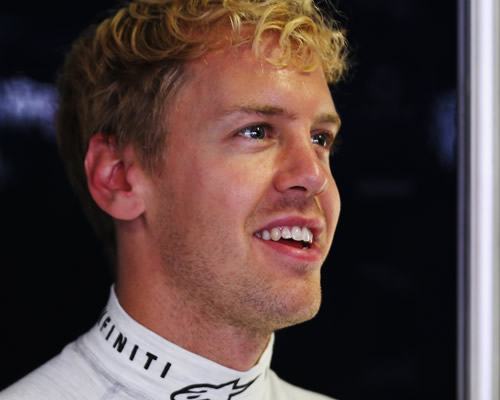 Red Bull’s Sebastian Vettel was thrilled to take pole position for the Italian Grand Prix and is hopeful of securing a win at Monza.

The championship leader took a trip down memory lane, reminiscing on his first-ever race win at the track in 2008 and victory in 2011 – and the German is confident of replicating it this year.

“This weekend, the car was fantastic,” said Vettel. “We had a really strong pace yesterday and we were able to take that into qualifying today.

“This year seems to work well and hopefully we’ll have a good race tomorrow. We’re able to match other cars down the straight and we know in corners, we have a strong car.”

Whilst putting on a confident display, the German admitted that he was surprised to have both Red Bulls on the front row.

Mark Webber, who will join Vettel on the front row, was upbeat and pleased to secure a qualifying personal best at the circuit in what will be his last race at the track.

“I said to the boys I was looking for a qualifying PB, it’s a nice step towards a good race tomorrow, I got there in the end when it mattered,” said Webber.

“Seb did a really good lap. It was a bit of a mixed up session and it’s usually difficult at Monza.”

Sauber’s Nico Hulkenberg seemed more surprised than anyone else to land third spot on the grid.

When asked where his pace came from Hulkenberg said: “I don’t know either. [It was] a really nice surprise, I didn’t expect it after a very difficult Friday. The guys have done a fantastic job to turn the car around.”

Sauber team principal Monisha Kaltenborn admitted his surprise but could not hide her delight and pride.

“We couldn’t believe it ourselves,” she said. “This is fantastic. Nico said it himself, it was the perfect lap. I think he did a great job. It’s very important because it gives us the boost we need.”

She added that although it is an immense achievement, the team must remain realistic and focus on the race on Sunday – but was hopeful of a good result.

Lewis Hamilton could not hide his disappointment after only managing 12th place. He said: “I just drove like an idiot. That’s the worst I’ve driven for a long, long time. I’m sorry to the team.”