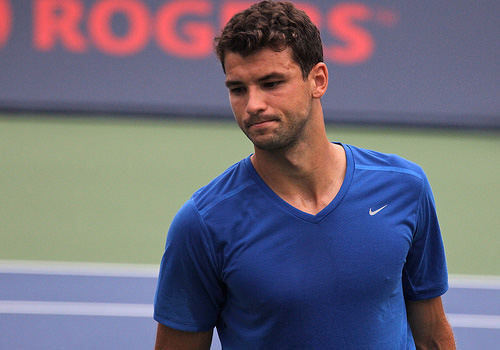 Grigor Dimitrov has warned his rivals that he is “just beginning” his journey to the top of men’s tennis after receiving an Emirates ATP Top 10 Trophy.

I’ve always been chasing the Top 10 all my life, then especially when I got onto the tour. I take it as a step forward. For me it’s just the beginning

Dimitrov lost to eventual winner Novak Djokovic in four sets in the semi-final, but the 23-year-old still took heart from his progress at Wimbledon.

“It obviously means a lot to me,” said Dimitrov after receiving the award from ATP Executive Chairman & President Chris Kermode.

“I’ve always been chasing the Top 10 all my life, then especially when I got onto the tour. I take it as a step forward. For me it’s just the beginning. I’m really excited to be able to be in that space and to fight for what’s out there.

“When you reach the Top 10, you reach another status and it brings you extra confidence and belief. But Roger [Rasheed] and I know it’s just the beginning and we want to go even further.”

Joining Dimitrov in receiving an Emirates ATP Top 10 Trophy were recent Washington winner Milos Raonic, 23, Latvian Ernest Gulbis, 25, and Kei Nikishori, who is set to miss the Rogers Cup and Cincinnati Masters due to a foot infection.

The 24-year-old Japanese star said: “It’s a very special feeling. It was my goal when I was a kid.

“I was always looking to reach the Top 10. The goal is to keep this ranking. You get used to this feeling and hopefully I can keep going.

“Thanks to my team; they always helped me. It was big news in Japan because they always talk about the Top 10 and now I made it.”