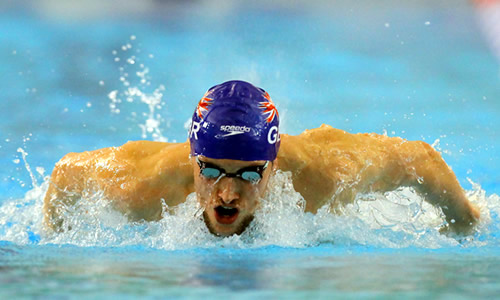 James Guy is showing no signs of slowing down at the British Swimming Championships in Glasgow as he closes in on a golden double.

That was Guy’s first national title but he could be in line to double that tally very quickly as he returned to the pool the very next morning to lead the 200m freestyle qualifiers, touching home in 1:48.64.

Nick Grainger, who won silver behind Guy in the 400m freestyle, set a personal best of 1:48.81 to qualify second fastest while Joshua Walsh was third through in 1:49.25.

Scottish champion Lewis Smith led the way into the 400m individual medley final, winning his heat in 4:19.92 ahead of Max Litchfield, who clocked a personal best 4:20.33.

Ross Murdoch was second through in 1:01.15 while 200m breaststroke gold medal winner Michael Jamieson was sixth fastest in 1:02.36.

Murdoch’s Stirling teammate Sian Harkin lowered her personal best to 25.38 seconds as she led the way into the 50m freestyle semi-finals ahead of defending champion Francesca Halsall (25.45) and Amy Smith (25.49).

Meanwhile, Georgia Davies led the way in the women’s 100m backstroke heats, touching home in 1:00.85 minutes. Defending champion Lauren Quigley was second through in 1:00.86 while Lizzie Simmonds was third fastest into the semi-finals in 1:00.99.