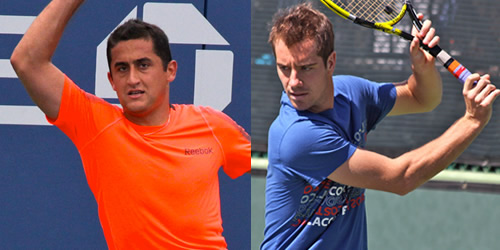 With little more than a week to go, and key contenders Jo-Wilfried Tsonga and Janko Tipsarevic retiring in their first-round matches in Valencia, the final line-up for the World Tour Finals still hangs in the balance.

It looked as though this week’s two 500 ATP events in Basel and Valencia would offer the main players a reasonably straight-forward run into the last two places.

Juan Martin del Potro, sitting at No7 in the race, is still favourite to take one of the spots after winning in Vienna last week and in his opening match in Switzerland. But Tsonga and Tipsarevic, ranked Nos8 and 9 respectively, still have work to do at the Paris Masters next week, assuming they are fit to play there.

Tsonga was forced to pull out against the unseeded Xavier Malisse with a back problem when the Belgian led him 3-1 in the opening set, while Tipsarevic withdrew against Gilles Simon at 4-5 down suffering with a problem in his right shoulder.

Meanwhile, Valencia has also brought to an end the hopes of three other men. Juan Monaco, who put himself into a strong position after winning the Kuala Lumpur title, subsequently lost in the second round of Tokyo and the first round of Shanghai. He has now lost in the first round in Valencia to Lleyton Hewitt.

And two outside chances, the big-hitting Milos Raonic and John Isner, have also stumbled in Spain, losing in the first and second round respectively.

What these various unfolding storylines have done is open the door just a crack for two other players. One, Nicolas Almagro, is at 10 in the race and has reached the second round in Valencia. The other comes in the unexpected shape of Richard Gasquet, now in the quarterfinals in Basel, who has made a late surge to 11 in the race and could overtake Almagro with another win if the Spaniard loses to Sam Querrey.

Almagro has been an under-the-radar man for more years than he might wish. One of the huge Spanish Armada of players, it has been Nadal, closely followed by David Ferrer, who have taken the limelight and the prizes. Along the way, the glamorous Fernando Verdasco and Feliciano Lopez also took their share of wins and attention.

Yet Almagro has not been outside the top 15 for two years and made his first appearance in the top 30 almost six years ago. He has worked hard, usually sitting near the top of the pile in tournaments and matches played, and missed out on his first end-of season qualification in London last year by a hair’s breadth.

In 2012, he already has a career-best 56-20 record of match wins, has reached four finals, two of them leading to titles in Sao Paulo and Nice. Remarkably, every one of his 18 finals has come on clay, yet he has a big serve, a big single-handed backhand and the apparent power to make the most of hard courts. He would surely love the chance to at least try his hand at London’s famous indoor tournament.

Gasquet, in contrast, blossomed early. He was a member of the eight-man end-of-year tournament five years ago at just 21 when already a veteran of two Masters finals.

The creative Frenchman subsequently dropped as low as 72 in the rankings in 2009. He was unequivocally cleared of cocaine use but the sage had a seemingly profound impact on the confidence of the young man who played in his first Grand Slam match before turning 16.

Still only 26, Gasquet has gradually worked his way back, ending each subsequent year higher than the one before. And with a final finish at the Toronto Masters and a win in Bangkok a few weeks ago, he is on cue to do the same this year.

Gasquet’s chances of nabbing a place among the top eight for the second time could end up in the hands of the men above him. Rafael Nadal has announced that he will not be competing at both the Paris Masters and the World Tour Finals after being off the tour since Wimbledon with ongoing knee problems.

There is also a ‘reserve’ No9 place in London to play for and, judging from the women’s equivalent event in Istanbul where Sam Stosur has just taken Petra Kvitova’s place, that is a place worth fighting for.