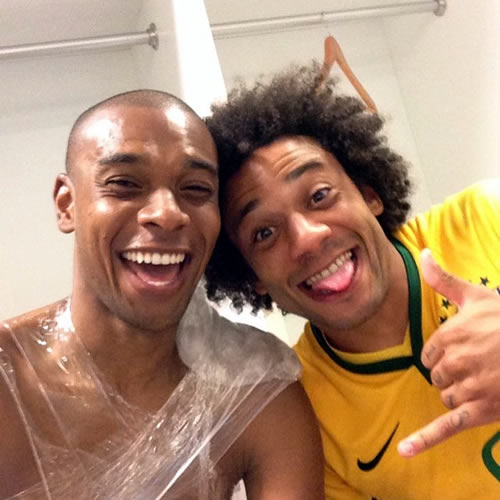 Fernandinho poses for a post-match selfie with Marcelo Photo: Fernandinho/Twitter

Brazil moved a step closer to reaching the World Cup final on home soil with a 2-1 victory over Colombia in the last eight.

The hosts took the lead in the seventh minute in Fortaleza when Neymar’s corner found captain Thiago Silva, who guided the ball in with his knee.

David Luiz’s stunning free-kick then made it 2-0 to Brazil in the 68th minute, before James Rodriguez netted what turned out to be a consolation for Colombia from the penalty spot.

Friday’s second quarter-final inevitably prompted plenty of activity on Twitter – and here are our favourite updates.

Hull City midfielder Tom Huddlestone (@Huddz8) is full of praise for Luiz as his dipping free-kick gives Brazil a 2-0 lead: “There it is people, goal of the tournament!!!!! Take a bow David luiz!!! Practise practise practise then produce in a Game! Marvellous”

Chelsea defender Ryan Bertrand (@ryanbertrand3) is not surprised: “No surprise to me. He’s done it time after time in training now we see it at the biggest stage in football @DavidLuiz_4 #DavidLuiz”

Ex-Manchester United defender Rio Ferdinand (@rioferdy5) is full of praise for Rodriguez: “JAMES IS THE MAN. My player of the World Cup so far. Great passer & dribbler. Does the lot. Smoothness personified on a pitch.”

Ex-Bolton captain Kevin Davies (@Kevin__Davies) offers his post-match thoughts: “The Brazil Train gathering momentum!! No Silva and possibly Neymar against Germany but going to be hard to stop them now… ”

And finally, Joey Barton (@Joey7Barton) has the last word: “James Rodriguez entered this tournament a young, highly rated talent. He exits as a potential heir to Messi’s throne and The Fucking Man…”