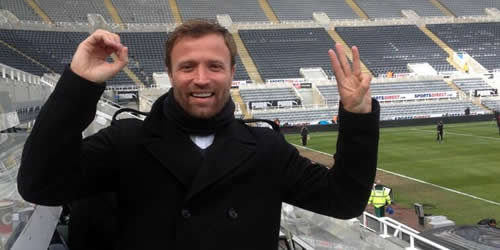 Stephane Sessegnon scored in the 27th minute before Adam Johnson and David Vaughan wrapped up the win in the final 12 minutes, with Sunderland moving three points clear of danger.

Here is the best of the Twitter reaction from the professionals, past and present, in chronological order as the Black Cats win a vital Tyne–Wear derby.

Ex-Black Cats star Don Hutchison (‏@donhutch4) believes it is a deserved lead: “Sunderland been by far the better side so far. Deserved their 1-0!”

England all-rounder and Newcastle fan Luke Wright (‏@lukewright204) is greeted with bad news upon arriving in India: “Just arrived at the hotel in Chennai. Turned on the tv to see Newcastle 0-1 down to Sunderland! Big second half needed lads. #NCFC”

Injured Sunderland striker Connor Wickham ‏(@ConnorWickham10) is thrilled for his team-mate Johnson: “Get in Jonno!!!!!!”

West Brom Steven Reid (‏@stevenreid12) is impressed by Vaughan’s strike: “Vaughan that is a #strike #worldy!”

Marseille midfielder Joey Barton ‏(@Joey7Barton) isn’t surprised the Di Canio factor is having the desired effect: “Script was written for Di Canio. How can a manager with that passion not inspire his players? Newcastle’s season unravelling.”

England’s Ashes winning captain Michael Vaughan ‏(@MichaelVaughan) is thrilled to see Di Canio back in the Premier League: “Paolo Di Canio as a player and even more so as a manager is complete box office… #fact”