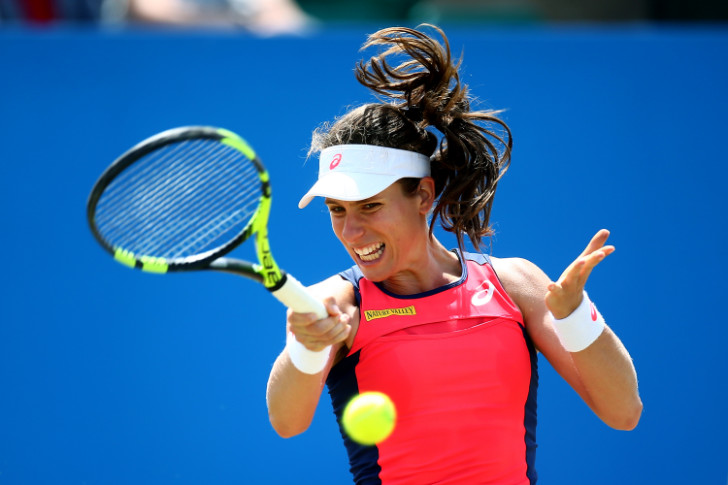 World No8 Johanna Konta will play both singles and doubles semi-finals in front of a sold-out crowd in Nottingham on Saturday.

The British No1 advanced to her first Aegon Open Nottingham semi after a 6-3, 7-5 victory over Australian 21-year-old Ashleigh Barty, before teaming up with Belgian Yanina Wickmayer to beat No3 seeds Casey Dellacqua and Hao-Ching Chan, 6-0, 7-6(6), to reach the last four of the doubles.

It took the No1 seeded Briton an hour and a half to get past Barty, and she now faces Magdalena Rybarikova. Konta and Wickmayer then join forces against Australians Monique Adamczak and Storm Sanders for a place in the doubles final.

“I only had one little dip but I tried to stay strong. I felt I was able to raise my game. It was difficult out here again with the conditions, but overall I thought we played a very good match.

“I’m enjoying [being in both the singles and doubles events]. It’s a real opportunity to have a little more time on the grass. I’m just looking to keep competing well and try and execute my game plan as much as I can with each match that I’m playing.”

“She’s an incredibly talented and effective player, especially on this surface. I know she also won the $100k in Surbiton [where she beat Heather Watson], so she’s definitely coming in with quite a bit of match fitness. I’m sure she’s playing with quite a bit of confidence.”

Earlier in the day, Watson advanced to the doubles semis with Christina McHale, and will next face the British pairing of Laura Robson and Jocelyn Rae, who came from a set down to beat Darija Jurak and Anastasia Rodionova, 4-6, 6-3, 10-7.

In Nottingham’s ATP Challenger, Ken and Neal Skupski beat Brydan Klein and Joe Salisbury in an all-British semi-final, 7-5, 6-4. They will play Australia duo Matt Reid and John-Patrick Smith in the title match.

At the ITF Aegon Manchester Trophy, local heroine Naomi Broady made it through to the semi-finals, beating top seed Kai-Chen Chang, 6-3, 6-4. The Stockport local commented after the match:

“I am really pleased, I was playing much better today than yesterday. I think it helped that it wasn’t as windy today. I served really well, I served a great game to finish off the match.

“She is a great player, I knew that it would be tough and I had to really stick to my tactics, mixed in lots of slices again, but I think my serve made the difference today.”

In the ATP250 in Stuttgart, No2 seeds Jamie Murray and Bruno Soares reached the final of the Mercedes Cup with a 6-3, 6-7(5), 10-6 victory over Marcin Matkowski and Max Mirnyi. They will play either top seeds Mike and Bob Bryan or No4 seeds Oliver Marach and Mate Pavic for the title.

At this week’s other ATP250 in s-Hertogenbosch, Gilles Muller ended Aljaz Bedene’s run in the quarter-final, coming back from 3-1 down in the third set to win, 6-3, 3-6, 6-4. He will face German 20-year-old, Alexander Zverev, in his attempt to reach the final in the Netherlands for the second year in a row.

Johanna Konta into first grass final in Nottingham, and targets third title of 2017