The 2017 version of Johanna Konta is a woman to take the positives even out of negatives, and her loss on Saturday was just such an occasion 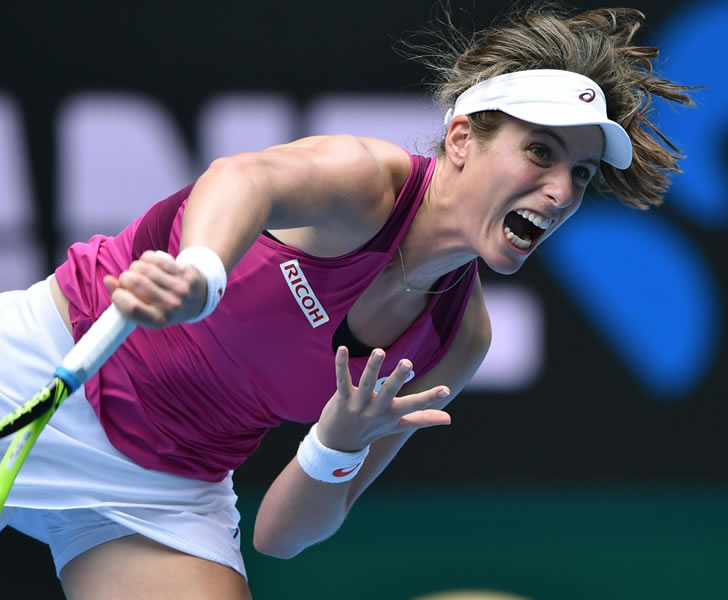 As Johanna Konta arrived in Madrid for one of the biggest tournaments in the women’s tennis calendar, she had just reached another milestone in her rapid rise to the top of her sport.

The elegant Briton had reached No6 in the world, and a quick look at that other measure in tennis rankings, the “Race to Singapore”, showed that, on this year’s results alone, she was at No3.

Hard to believe that as recently as 2015, Konta was ranked down at 147, but a steep rise in confidence—helped not a little by the help of a sports psychologist—was backed by improved form.

She won her first title, the Stanford Premier, in 2016 and the Sydney Premier this year, but arguably her best results have now come at the elite WTA level, the Premier Mandatories. There are only four of these 1,000-point events in the year, and she reached the final of her first in Beijing last autumn and won in Miami this March.

Indeed, it is on the world’s biggest hard courts that Konta has shone the most. Her Grand Slam breakthrough came at the US Open in 2015 with a run through qualifying to the fourth round. She then made the semis of the Australian Open last year and the quarters this year. But notable by their absence from her resume are stand-out results on clay—a surface where wins have proved very hard to come by.

Take the French Open: she made it to the first round via qualifying in 2015, and was in the first round by right, ranked 20, last year. Both times she did not make it any further.

Rome last year did yield some success—a rare third-round run—but this year in Stuttgart, she managed just one win, and come Madrid, it was the same story. She has yet to win a match in the Spanish capital despite its livelier conditions.

Only the most dedicated tennis fans and committed Brit followers would have seen Konta take to court just before midnight for her first match here, and then two and a half hours later give up a lead in the final set to lose that opener to Laura Siegemund.

By the time she had returned to the Caja Magica on Monday, where she lost her opening doubles match too, the Briton had recovered both her smile and her cheerful demeanour. These days, she is not one to dwell on disappointments, and she was as impressed by this correspondent staying to the bitter end on Saturday night as she was by the handful of spectators who had echoed around the huge centre court.

“Saturday night? It was more like Sunday morning. It was not ideal for anyone. I think the biggest troupers were the 10 people who watched… There were 40?? Well, I think they were solid, pretty impressive!”

The 2017 version of Konta is a woman to take the positives even out of negatives, and her loss on Saturday was just such an occasion.

“It’s the way it is sometimes, it was slightly unfortunate. Every match was over two hours, so it was one of those things you can’t predict. But both of us were in the same boat. It was actually quite sad, because we played quite a good match, an entertaining, good match. It was a pity no-one knew we had played!”

She went on: “To be honest, I think it was probably the best match I’ve played so far this clay season. I think I learned from my last week in Stuttgart, think I’m constantly building on the experience of the surface and trying to apply what I do well and adapt certain things.

“Overall, I think it was good match, a hard-fought match, and she’s playing with quite a bit of match fitness.”

Siegemund arrived in Madrid not only having just won the Stuttgart title but with a run to the semis in Charleston, picking up four top-10 wins. Konta on Saturday made it five.

“She’s a great player so it’s not just her momentum… she is one of the most mentally tough players on the tour and she’s tricky on clay. So I’m quite happy with the performance. There are things I’d like to do better and hopefully I’ll get a few matches in Rome to keep building on that, but overall it’s moving in the right direction.”

In Rome last year, she had also been keen to accentuate the positives:

“I enjoy [the clay]. I think it’s quite a lot of fun, actually. It’s different than any other surface. I mean, I think I do slide a little bit on the hard here and there but obviously nothing like the clay. I’m enjoying it for all the things that it brings to the game. I definitely feel that the more opportunities I’m able to create for myself to play matches on here, the more comfortable things will feel.”

She also asserted back then:

“I don’t have a favourite surface. I have always said so, and I maintain that. I think these are new experiences for me. I have never played Madrid before and I have never played here before. I’m definitely accumulating new experiences. Hopefully, the work I put in now will also translate into not just this time next year but also the next surfaces that I play on. I think there is a lot of crossover no matter what surface we are playing on.”

This time around, though, she is with a different coaching team after splitting from her coach of three years, Esteban Carril, ahead of 2017. In his place, she recruited Wim Fissette, who has worked with the likes of Kim Clijsters, Simona Halep and Victoria Azarenka.

Konta’s former mental coach, Juan Coto, also died suddenly last November, making it a period of significant change and adjustment. So how was the new coaching set-up working out?

“I think we’ve really developed a great team. All of us are really unified in our approach and how we want to grow and keep on developing. I’m surrounded by positive people which is really good for me, and just generally happy and good humoured people. Those things are pretty key for me in a functioning team.”

This week, of course, the big coaching news has been Novak Djokovic’s split from his team of almost a decade. The Serb, in making the decision, talked of “introducing new energy”. Was that a factor in Konta’s decision?

“It wasn’t as clear cut as that. I mean the way things ended, it was more of a mutual decision that it ended. It wasn’t necessarily, ‘Oh I need a change’. It was just mutually agreed that we came to an end.

“I think I’ve just been very fortunate with the way things have actually developed in quite a short space of time, so I’m very pleased with the people I have around me.”

And she is clearly enjoying the calmness that Fissette brings to court, even during on-court coaching breaks:

“I always look to call him down when I am in a receptive frame of mind… I always try to be clear-headed when he comes down because essentially, he’s coming to help me. He’s coming to give me perspective with things that I can’t necessarily see in the match but that he can see from the outside, so I think the more open I stay, the better.”

It could be one of Konta’s watchwords these days: receptive, open, looking for the positives—all qualities that have helped this articulate woman become one of the best in the world. She is already the first British woman to break the top 10 and to reach a Grand Slam semi-final in more than 30 years.

And there is surely more to come—even if it does not come before the tour heads back to her home turf, the grass the Great Britain.