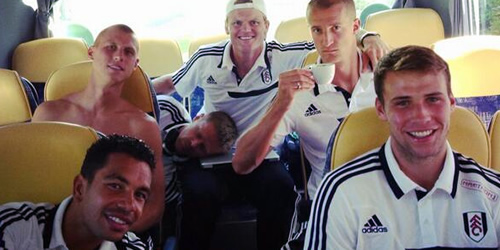 Pajtim Kasami and Steve Sidwell both scored contenders for goal of the season as Fulham came from behind to seal a 4-1 win at Crystal Palace.

The Cottagers pair netted after Eagles midfielder Adrian Mariappa had handed the home side a first-half lead, with Dimitar Berbatov and Philippe Senderos sealing three points.

Here is a selection of the best Twitter reaction from the professionals, past and present, to the wonder-strikes, as well as Fulham’s much-needed victory at Selhurst Park.

Manchester United defender Rio Ferdinand (‏@rioferdy5) has his night mapped out: “Emmerdale, Corrie, Football, Corrie then Eastenders..accompanied by a couple of pints of juice, biscuits & fruits! Good Monday evening that!”

Aston Villa striker Andreas Weimann ‏(@andiweimann) is lost for words after Kasami’s strike: “What a goal that was! #flamey”

England legend and Match of the Day presenter Gary Lineker ‏(@GaryLineker): “RT ‘@JackWilshere: Well there’s my ‘goal of the month’ prize gone!!!! Take a bow! #Player #MNF’ < We'll decide that, if you don't mind. #MOTD” Hull City defender Curtis Davies (‏@TheCurtisDavies) pays tribute to a great scorer of goals: “@mattletiss7 I know I look young but (unfortunately) I am old enough to remember the goal of the month contenders every month.”

Swansea City winger Wayne Routledge ‏(@WayneRoutledge) feels for his former club: “Oh my days… What have Palace done to deserve this??? #2Worldies”

West Bromwich Albion midfielder Steven Reid (‏@stevenreid12) says you can’t defend against goals like that: “Got to feel for Palace… Two absolute worldys against!”

Celebrity Arsenal fan Piers Morgan (‏@piersmorgan) still feels Wilshere’s goal is the best: “Not only is Kasami’s goal nowhere near as good as @JackWilshere’s…. it’s not even the best Fulham goal in this game.”

Fulham defender John Arne Riise ‏(@Johnariise3) is thrilled for his team-mates: “Get in boys!!! 4-1 to the Whites.. Surely well-deserved three points!!!”

Finally, Gray (‏@mickygray33): “If I was in a dressing room with chamakh I wld pin him down and shave his hair off… With the help of my team-mates obviously…! #disaster”