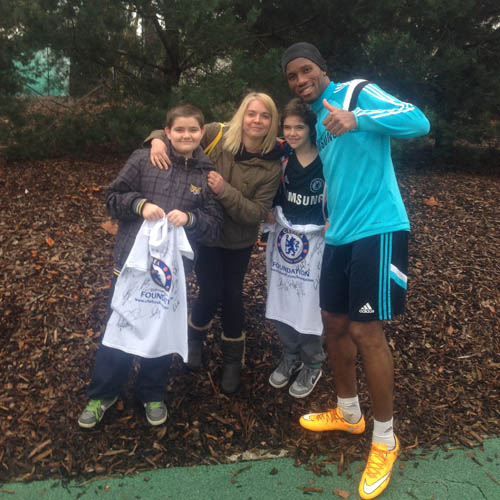 Thursday proved a day to remember for a host of young Chelsea fans as they visited our Cobham Training Ground to meet their Blues heroes.

Among the guests were brothers Jaden, 12, and Reece, 15, who both have a genetic kidney problem, and mum Sherry explained the joy the trip to see John Terry, Diego Costa and co. had provided her young family.

She said: ‘Reece had a kidney transplant about 20 months ago, he had a rejection at first but is stable now. My youngest Jaden will possibly need one in the future as they both carry a genetic condition, so it means the world to them and they have been looking forward to it for so long.

‘When we get home it will sink in as we are all massive Chelsea fans. It has been a great day and we now have memories to treasure for a lifetime.’

Joining the Hill family was 18-year-old William Risdale, who had a kidney transplant in February after being on a dialysis machine for almost two years, and mum Claudia admitted the day trip to Cobham was a special moment in her young son’s life.

‘What a fantastic opportunity we have had, it really is the best medicine ever,’ she said. ‘It chokes me up to see him this happy and we will never forget this day.’

As part of our continued work with the Make-A-Wish Foundation 20-year-old Andrew Hyland, who has Duchenne muscular dystrophy, made the trip from Ireland to meet his heroes, with Eden Hazard the highlight of the day.

‘I really enjoyed meeting the players,’ he said. ‘They were friendly and all stopped to say hello. My favourite player is Eden so it was great to meet him and see him train.’

Nine-year-old Frankie Hobbs, who has a bowel condition and was referred to the Foundation by Great Ormond Street Hospital, was another to make the trip to Cobham and was joined by his brother Harry and mum Sue for the day.

‘This has been an amazing, wonderful day and I can’t say thank you enough,’ said Sue. ‘It is unfortunate that Frankie is ill and that is why we are here but we couldn’t have asked for a better day.’

Our final guest was 16-year-old Georgie Dawes – who is a member of the Chelsea Foundation Disability Inclusion programme.

Georgie has kidney and lung disease and was invited to attend the session and meet the players by the club.

Jose Mourinho: Why my Chelsea won’t get complacent