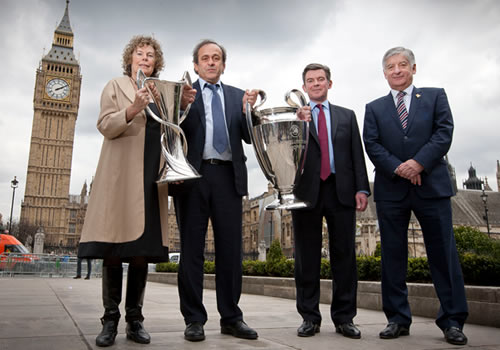 The Champions League final will take place at Wembley next month Photo: Uefa

Chelsea captain John Terry admitted he felt “quite sad” when handing back the Champions League trophy to Uefa in London on Friday.

The Blues won their first-ever Champions League crown last season after a dramatic penalty shootout victory over Bayern Munich in the final.

And Terry was on hand to give the trophy back ahead of next month’s showpiece at Wembley along with Blues team-mates Petr Cech, Fernando Torres, Branislav Ivanovic and Frank Lampard.

“It’s quite sad giving it back after we worked so hard for it for so many years,” said Terry.

“To win it the way we did made it all worthwhile. It’s a beautiful trophy and a great competition.”

Terry also sparked controversy at the handover event when he snubbed a handshake offer from FA chairman David Bernstein, who made the decision to strip the defender of the England captaincy in 2012 amid racism allegations.

The centre-half retired from international football later in 2012 after being found not guilty of racist abuse in court.

Terry then told Sky Sports: “It’s a difficult one for me. Obviously, he [Bernstein] was the one who spoke about me in the court case and said things. I don’t want to talk on air. It’s probably a subject that we should maybe just avoid.”

The trophy will now embark on a nationwide tour until 22 May and will then be on show at the annual Champions Festival between 23 and 26 May, part of a week of activity taking place across London.

The free four-day football celebration, featuring a series of family-friendly activities, will be the first major event to come to the home of the London 2012 Olympics since last summer, being located at The International Quarter close to Queen Elizabeth Olympic Park.

“We’re delighted to have it back in London after its last appearance at Wembley in 2011.

“2012 was a fantastic sporting summer for the UK and London, and 2013 is in its own way equally exciting.

“The Champions League final is the jewel in the crown and thanks to Uefa and Michel Platini for the honour you do in entrusting us with this great fixture.”