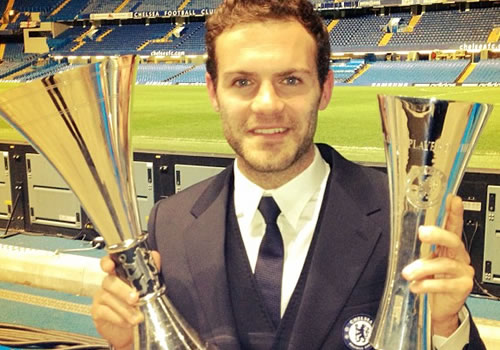 Juan Mata has been named as Chelsea’s player of the year for the second season running after another stellar campaign for the Spaniard.

The 25-year-old, who also scooped the players’ player prize, has enjoyed a stunning second season at Stamford Bridge, scoring 19 goals and making 35 assists in all competitions for the Blues.

The main award was voted for by supporters on the official Chelsea website, with Mata joined by fellow nominees Frank Lampard, David Luiz and Eden Hazard.

“It’s my second season here and winning the trophy two years in a row is amazing for me. I just want to say thank you to all the supporters and all my team-mates.”

Mata was presented with the player of the year award by captain John Terry, who said: “He’s been phenomenal. It’s not just his goal-scoring, it’s his assists as well.

“He’s fantastic, he brings so much to the team. He’s a magician, he has a great first touch and fantastic vision.”

Frank Lampard, who signed a new one-year extension to his Chelsea contract on Thursday to keep him at the club until next summer, received a special recognition award after becoming the Blues’ all-time record goal-scorer.

The 34-year-old scored his 202nd and 203rd strikes against Aston Villa last weekend to surpass the tally previously set by Bobby Tambling.

“Getting the equalising goal on the day and drawing level with the great man himself was a big deal for me,” said Lampard.

“It was such a huge game for us, and I kind of felt it would be the day after scoring the first one.

“I can’t really explain it. I thought it would be good when I done it, but I didn’t realise quite how good it would feel. To have the fans at Aston Villa and my team-mates celebrating with me at the end was quite emotional for me, so thanks to all the lads.”

Chelsea striker Fernando Torres: It’s been a good season for me