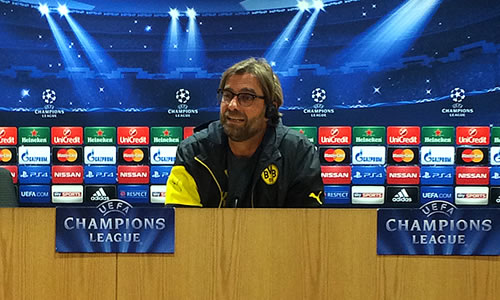 Jurgen Klopp has claimed that Mesut Ozil is only appreciated when he’s injured, as the Borussia Dortmund manager ran the rule over Arsenal’s season on Tuesday.

The Gunners are facing a mini crisis after drawing 3-3 with Anderlecht in the Champions League last month before losing to Swansea City and Manchester United in the Premier League.

However, Klopp is facing a much bigger headache as his Dortmund side languish in the Bundesliga’s bottom three after Paderborn came from 2-0 down to rescue a point in stoppage-time on Saturday.

And the charismatic Dortmund manager sympathised with Arsene Wenger’s injury woes as the 2013 Champions League runners-up continue to battle their own fitness problems after losing Marco Reus until after Christmas last weekend.

“Is it the first time pressure for him [Wenger]? Different kinds of pressure…? I don’t know so much about the situation of Arsenal in British football,” Klopp told his media conference ahead of Dortmund’s clash at The Emirates on Wednesday.

“I don’t know what people think here or what they want to be in this season. Chelsea are top, Manchester City have problems in the Champions League and Manchester United have many problems. Maybe people think this is the perfect time for them to come through.”

While analysing Arsenal’s injury crisis, Klopp pointed out that £42.5m signing Ozil is only fully appreciated when the World Cup winner is sidelined with an injury at the north London club.

“Mesut Ozil – nobody wants him when he plays, everybody needs him when he doesn’t play. I don’t know about Jack Wilshere and Olivier Giroud,” Klopp added.

Dortmund were 2-0 winners in Germany on matchday one after Ciro Immobile and Pierre-Emerick Aubameyang scored either side of half-time.

What do you think of Jurgen Klopp?