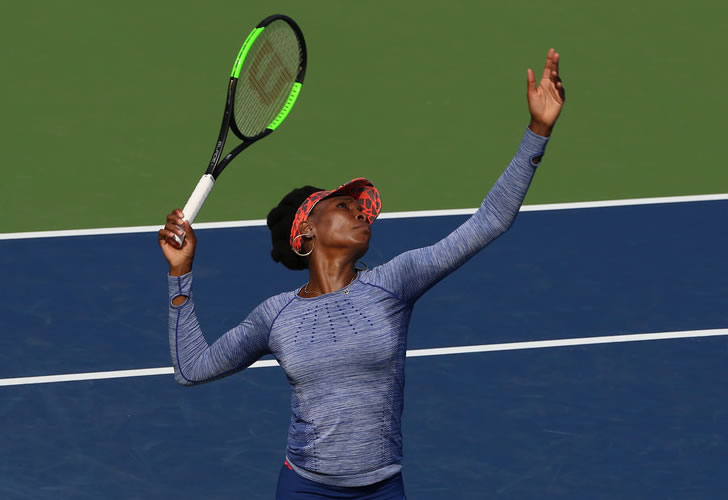 Venus Williams in practice action at the US Open Photo: Marianne Bevis

There is no doubt that many eyes have been following Maria Sharapova’s every move since she arrived in New York, and the maximum possible number had the chance to do so: all of her matches were scheduled in the biggest arena in tennis, Arthur Ashe.

But her fourth-round encounter with Anastasija Sevastova would not be the headliner as another day dawned cool and damp at Flushing Meadows. That honour was reserved for the highly-anticipated showdown between two Wimbledon champions, No3 seed Garbiñe Muguruza and No13 seed Petra Kvitova.

Muguruza had not beaten Kvitova since their first match—the Czech won both encounters last year. But Muguruza was a woman growing in stature and confidence. Since winning Wimbledon in July, and backing it up with the Cincinnati title, she had put herself firmly in contention for the No1 ranking.

And although she was not herself inclined to talk about that much, everybody else was, because she had looked truly formidable in New York. She had not lost a set and had dropped only nine games in her three matches thus far.

As for Kvitova, she was seeded lower than her form deserved, for she had only returned to competition at Roland Garros after a devastating attack to her left playing hand in December.

She won Birmingham, and then strung together a few good wins through the hard-court swing towards the US Open, but faced a really tough draw in New York. No matter: the power game and steely determination of the Czech saw her producing her best tennis since her return. She had not dropped a set against Jelena Jankovic, Alize Corner and Caroline Garcia.

But Muguruza had champion written all over her, as well as world No1: It was a tall task between two 6ft power players, Kvitova the leftie, Muguruza the rightie.

The match certainly lived up to its billing, particularly in the first set. The reigning Wimbledon champion who came out with all guns blazing and got the first break, 3-1.

Kvitova though showed all her champion’s mentality in the sixth game, a 10-minute marathon during which she fended off three break point. It was a vital hold, and she went on to break in the next and level the set at 4-4.

The tension was palpable, and each felt it at the business end of the set, exchanging breaks to take it to a tie-break. Again, Muguruza edged the early advantage, 2-0, but Kvitova’s big swinging serve, her willingness to come forward, and her famed forehand took her through comfortably, 7-6(3), closing out the set with a smash.

As has always been the case with Kvitova’s attacking style of play, there had been plenty of winners and plenty of errors, too, but she ended with two more points than Muguruza.

It looked in the second set as though Muguruza had been thrown by playing against the same kind of aggressive tennis that she played—only more so. And although Kvitova lost concentration in the first game to hand an easy break, she broke back to love, broke again in fourth, and held for a 4-1 lead.

To her credit, Muguruza held off a severe challenge to hold for 3-5, and very nearly broke through in the eighth game. Kvitova doubled faulted twice, but the Czech’s one-two serve and forehand drew one last error from the Spaniard, and Kvitova beamed in victory, 6-3.

It had, in truth, already been a fairytale story for Kvitova, her return to such form so soon after the attack eight months ago, but this was the cherry on her cake: She has now equalled her best ever run in New York.

But then the performance of the 37-year-old two-time former champion, Venus Williams is proving pretty remarkable, too. She is the only woman in the draw to have reached two Major finals this year, yet this was the No9 seed’s 19th appearance at the US Open—and she reached the final on her debut as a teenager in 1997.

Williams played the unseeded Carla Suárez Navarro, a petite, single-handed Spaniard of craft and variety but without the shot-making power-game of the 6ft 1in American.

The Spaniard, who was back from injury early in the season, had certainly caused Williams problems before, and would do so again in a two-hour battle that split the first two sets, 6-3 to Williams and then 6-3 to Suárez Navarro.

They exchanged breaks to open the third set, but then Williams grabbed control to reel off the next five games, 6-1. She admitted afterwards:

“This was my best match, so I was happy to see my level rise as the tournament is continuing because I know my opponents are going to be better, I need to be better. To be able to be out there and execute things that I wanted, it was a good feeling.”

She is certainly right about the quality of the opposition: She next plays fellow Wimbledon champion Kvitova, a woman who has dominated their head to head 4-1. But every single match, most recently at Wimbledon in 2014, has gone to three sets, and three of them have involved tie-breakers. Indeed their battle for a semi-final place could be a blockbuster to out-blockbuster today’s contests.

And what of the fourth Major champion in action today, Sharapova? Her match was indeed another battle royal, her fourth three-setter of the tournament. But this time, she did not come out the winner against the No16 seed Sevastova.

The two women had not met before, but it was an intriguing match-up between the penetrating, relentless power-play of the 30-year-old Sharapova—who had played only one match since retiring injured in Rome in May—and the nimble, varied and smart tennis of the Latvian.

Sevastova had an interesting back story, too, one that took in a two-year retirement during which she studied for a degree. She explained at the time:

When she felt better during 2014, she decided to give her career another go, reached the quarters in New York last year, and has now done so again this year, after turning around a first-set deficit of 5-7 into a victory, 6-4, 6-2.

She will play the unseeded American Sloane Stephens, who got past Julia Goerges in three sets, 6-3, 3-6, 6-1. The 83-ranked American is also recently back from a long injury break, but is now into her first US Open quarter-final.

US Open 2017: Karolina Pliskova throws down No1 gauntlet with blistering surge to Vandeweghe showdown