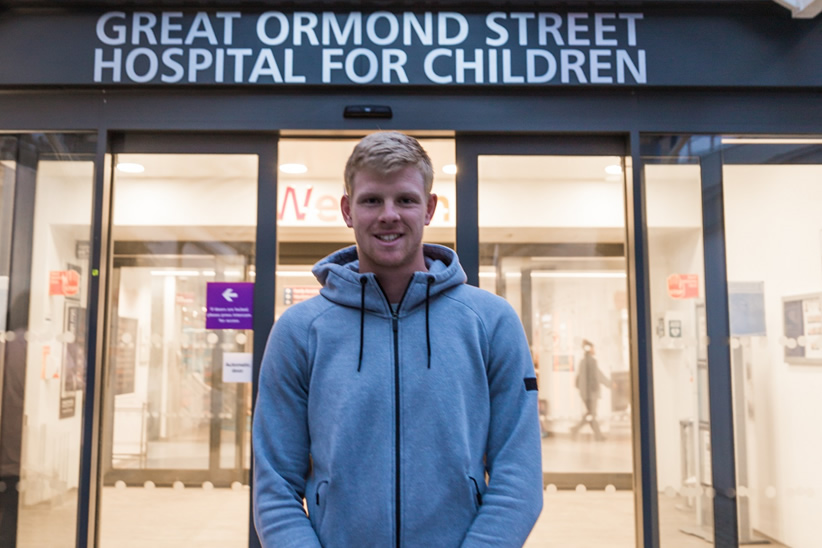 Kyle Edmund, who rose to No26 in the rankings after his first Major semi-final run in Australia a fortnight ago, has become a new ambassador for Great Ormond Street Hospital Children’s Charity.

Edmund, whose campaign in Melbourne left the Briton with a hip injury that kept him from playing in GB’s Davis Cup tie last week, paid a special visit to patients and families at the London hospital to mark the start of his support.

The 23-year-old Edmund took on the charity role after being moved by the story of GOSH patient James ‘Jimmy’ Shaw, who died in 2016.

James’ parents Pete and Emily Shaw decided to fundraise for the GOSH Charity following their son’s death from suspected sepsis when he was just five-and-a-half weeks old. They aim to create a legacy for James with the ‘Little Jimmy Brighter Future Fund’, and to thank GOSH staff for “their outstanding care, kindness and dedication.”

Having already raised £170,000, the Shaw family is now hoping to raise a further £200,000 to equip a brand new, state-of-the-art operating theatre and a pre- and post-anaesthetic care room for children at GOSH.

Edmund will support this special fund as part of his ambassadorial role, and after meeting some of the children recovering from surgery on his first visit, he said:

“It’s a great honour to be working with the GOSH Charity that helps so many families and children.

“I was especially moved by the heart-breaking story of little Jimmy. Emily and Pete managed to turn a tragedy into something wonderful and life-affirming, and have raised a truly staggering amount of money so far.”

Mrs Shaw said: “We are so delighted to have Kyle on board. He combines generosity and kindness with the fierce passion and drive you see on court, and we couldn’t ask for a better ambassador.”

Great Ormond Street, one of the world’s leading children’s hospitals, carries out pioneering research and treatment for children across the UK with the rarest most complex and often life-threatening conditions. For more information, or to donate to GOSH Charity, visit gosh.org.

For more details on how to donate to the Little Jimmy Brighter Future Fund, visit www.littlejimmybrighterfuturefund.com