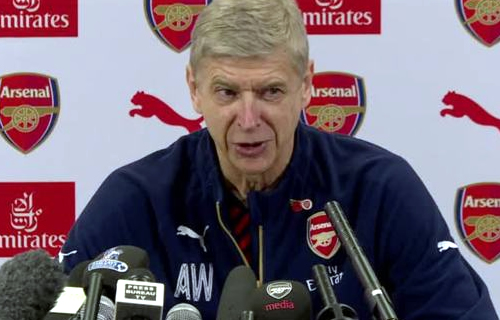 Hector Bellerin has been passed fit for Arsenal’s Premier League trip to West Bromwich Albion on Saturday after recovering from a groin injury, Arsene Wenger has confirmed.

The Spanish right-back has been sidelined since the 3-0 win over Swansea City on 31 October but is back in contention for the trip to The Hawthorns, Wenger told a news conference at Arsenal’s London Colney training ground on Thursday morning.

The Arsenal manager has also confirmed that midfield duo Aaron Ramsey and Alex Oxlade-Chamberlain remain sidelined for this weekend’s game, while striker Theo Walcott is around “one-to-two” weeks away from returning from a calf injury.

Arsenal’s long-term absentees include Danny Welbeck, Jack Wilshere and Tomas Rosicky, with the trio in line for comebacks in the New Year.

Oxlade-Chamberlain has posted a positive Arsenal injury update on social media in recent days, sharing a video of himself stepping up his rehabilitation with some sprint training at the Gunners’ London Colney training ground.

Arsenal head into Saturday’s clash with West Brom looking to return to winning ways in the Premier League after being held to a 1-1 draw by local rivals Tottenham Hotspur in their most recent outing.

The Gunners are currently second in the top flight table and level on points with leaders Manchester City after 12 games of the season.