The latest Chelsea injury update on the likes of Eden Hazard, Thibaut Courtois and Radamel Falcao 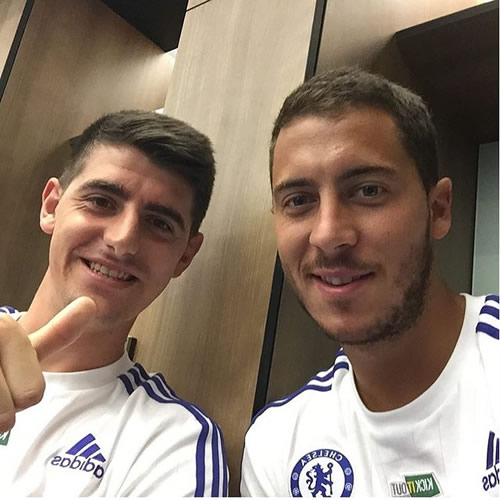 Eden Hazard has been struggling with illness, while Thibaut Courtois is sidelined with a knee problem Photo: Instagram

Eden Hazard could miss Belgium’s friendly clash with Spain on Tuesday night due to illness, Marc Wilmots has revealed.

The Chelsea playmaker featured for the full 90 minutes as Belgium secured a 3-1 win over Italy in last week’s international friendly.

However, Hazard missed a training session on Monday due to illness, with the 24-year-old showing signs of a fever. Wilmots said Hazard would be assessed in the build-up to Tuesday’s clash.

Chelsea fans will be hoping that the PFA player of the year will have fully recovered in time to face Norwich City in the Premier League at Stamford Bridge on Saturday afternoon.

Wilmots told HLN: “Eden is sick. He has some fever and a sore throat. He will remain until tomorrow in his room.

“We’ll see how it goes, and will then have to decide whether it will be OK on Tuesday night for him.”

Meanwhile, defender Zurt Zouma is expected to be fit to face Norwich next weekend after picking up a minor knock during the 1-0 loss to Stoke City before the international break.

Thibaurt Courtois is continuing to step up his rehabilitation after the Chelsea goalkeeper underwent knee surgery at the start of the season. The Belgian goalkeeper has been keeping fans updated with his injury progress via posts on social media in recent weeks and could be set to return to action for the west London club in December.