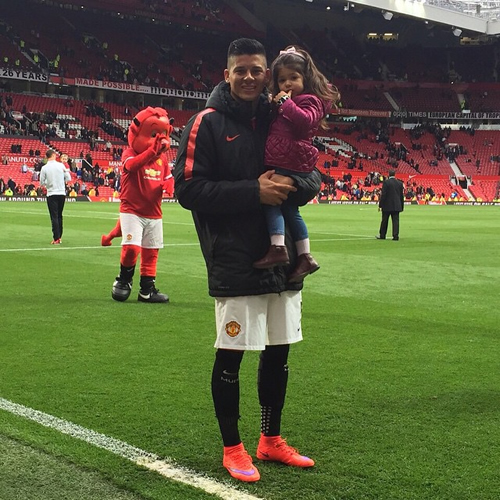 The pair sat out the clash at the King Power Stadium as the Red Devils came from behind to earn a point thanks to Bastian Schweinsteiger’s first-half header following Jamie Vardy’s record-breaking opener.

Speaking at his post-match news conference in Leicester, Van Gaal revealed that Rojo and Lingard had picked up “minor” injuries in the build-up to the game but did not go into detail about how long the pair could be sidelined for.

Van Gaal said: “I could not play with them. Lingard was a player in good shape so it was a pity.

“Rojo is our left defender and that’s also a pity because then I have to put my players in a different shape and different organisation. Because of that, I had to play with three defenders.”

The Dutchman also moved to play down concerns about striker Wayne Rooney’s fitness levels after he opted to bring the 30-year-old off in the second half of Saturday’s clash, with the forward appearing to be in some discomfort.

The United boss explained: “No, I don’t think it’s an injury to Wayne. I wanted to change one of the strikers.

“It could have been [Anthony] Martial or it could have been Rooney because they were not always running behind the central defenders, and I want that. Because of this, I wanted to change but then he was limping and then the choice was easy for me to make.”

United return to Premier League action with a home clash against West Ham United next weekend.