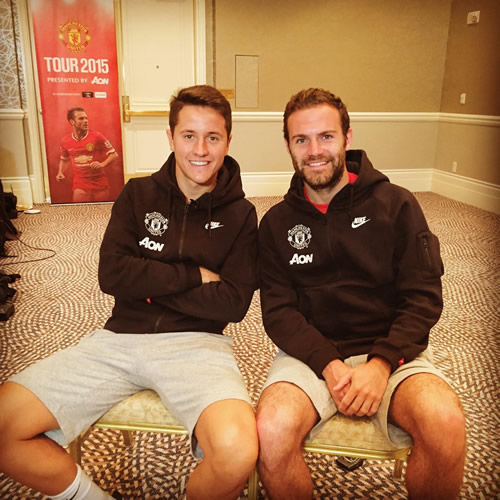 Louis van Gaal is hopeful that Ander Herrera’s hamstring strain is not too serious as he delivered the latest Manchester United injury update after Saturday’s win over Watford.

The Spaniard picked up the problem early on during United’s 2-1 win at Vicarage Road on Saturday afternoon and was replaced in the first half.

Herrera took to social media shortly after the final whistle to play down fears about the problem.

Van Gaal then delivered the latest Manchester United injury update after the game in his post-match news conference.

The Dutchman is expecting both Herrera and Phil Jones (ankle) to miss Wednesday’s Champions League clash with PSV Eindhoven at Old Trafford.

Van Gaal went on to say that it would be touch and go as to whether Anthony Martial will have recovered from his foot injury in time to face PSV.

And the United boss also revealed that youngster James Wilson missed Saturday’s game after suffering a minor knee injury in training before the clash.

Van Gaal told his post-match news conference: “We are in a lousy period with a lot of injuries. Also in the international break. Antonio Valencia was operated on and Luke Shaw you know, and now Jones and Herrera, I think, are not available for Wednesday.

“My first impression is that they are not too heavy but the problem is that we have to play Wednesday already. Jones had a twisted ankle and Herrera a hamstring injury.

“Rooney is ill, and that is a matter of days, not weeks. I expect that he shall play Wednesday, but you never know, I do not know the development of the illness. Today he is at home, we gave him a day off to heal the illness; tomorrow he comes and I can say more.

“Martial is another problem, his foot, it is not as heavy as the media have written but we have to wait and see if he can play Wednesday.

“Wilson had a swollen knee after training. I did not play [Marcos] Rojo also because when you have jet-lag you cannot play.”