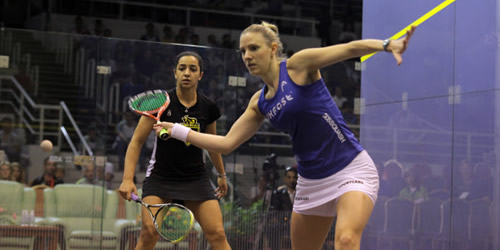 It hasn’t really sunk in yet. it just feels amazing

“I can’t actually believe that I’m world champion,” said Massaro. “Nour played so well and I was nervous throughout the whole match. That’s the hardest match I’ve ever played in my life, by far.

“It hasn’t really sunk in yet. it just feels amazing. The match itself was probably one of the hardest matches I’ve ever had to play, especially knowing that I wasn’t playing Nicol (David) and that there was an opportunity there that I didn’t want to miss.”

“I never dreamed that I would be able to say that I was the British Open champion and the world champion, but now I can.”

Massaro’s win means that England will go into this summer’s Commonwealth Games with two reigning world champions at its disposal.

Massaro, from Preston, is also the reigning British Open champion and will be defending her title at the 2014 Allam British Open in Hull, which runs 12-18 May.

She is currently ranked number two in the world on the WSA World Rankings and is one of three Englishwomen ranked in the top 10, along with Alison Waters (four) and Jenny Duncalf (10).