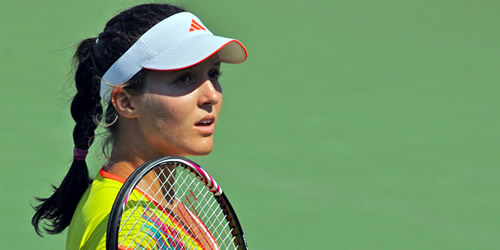 After a ground-breaking run at the US Open earlier this month, beating two Grand Slam champions before falling to the defending champion, Laura Robson broke more new ground this week by reaching her first WTA Tour final.

In her first outing since reaching the fourth round in New York, Robson beat three seeds, including world 23 Jie Zheng and the 32-ranked Sorana Cirstea, on her way to a dramatic final. There, at the Guangzhou International event in China, after almost three hours, Robson eventually lost to Su-Wei Hsieh.

The tournament, along with the Korea Open in Seoul, marks the start of the points-rich Asian swing that plays a major part in determining the final line-up for the year-end WTA Championships in Istanbul.

It proved to be a real test of endurance, with five women falling to illness in gruelling heat and humidity. However Robson not only stayed the course but came back from 6-3, 5-3 down, and faced five match points, to take seven games in a row. She led Hsieh 3-0 in the final set before the woman from Chinese Taipei returned the compliment with five straight games of her own to finally seal the match, 6-4.

But for Robson, this was another important milestone. She became the first British woman to reach a WTA final since Jo Durie in 1990 and it seems only a matter of time before she becomes the first since Sara Gomer in 1988 to win a tournament.

The 200 points Robson earned will also take her to another ranking high. She began the year at 131 having begun 2011, just before her 17th birthday, outside the top 200. By Wimbledon this year, she had broken the top 100 and then made a thrilling run at the Olympics. She lost in the second round of the singles to Maria Sharapova after pushing the No3 seed to a tie-break in the first set, but went on to win silver with Andy Murray in the mixed doubles.

By the US Open, Robson had cracked the top 90 and qualified for the main draw of a Grand Slam by right for the first time. And she rose to the occasion with a vengeance: The youngest woman in the draw first beat three-time former champion Kim Clijsters in Round 2, then La Ni in the next round before succumbing to Sam Stosur in the fourth. It was a run that guaranteed she would not only break into the 70s—and become the top-ranked British woman—but that she would begin for encounter television reporters outside her New York hotel.

Now she is on the verge of breaking into the top 60, and could be headed to the top 50 by the end of the year if she manages a good run through the remainder of the autumn.

If there was a small downside to her success in Guangzhou, it was that she was unable to take up her place in the qualifying rounds of this week’s Tokyo Pan Pacific Premier, where she reached the second round last year as a wild card. Her next target is therefore to prepare for the biggest of the women’s events in the Asian swing, the China Open, which begins next weekend in Beijing. Robson qualified for the main draw there last year but lost in the first round.

As it happens, a few days for rest and training may prove beneficial to the teenager. The difficult conditions—she tweeted “I think I just played in the sweatiest WTA final of the year!”—took their toll on Robson:

“I totally ran out of energy. I kept fighting but just wasn’t able to hit my shots as well as I had earlier in the match.”

She continued: “The more matches you play the more experience you get, and to play in a really tough final like this one in Guangzhou is a big experience for me.”

But it’s an experience to which she is becoming more accustomed with every month.

British No2 Heather Watson did qualify for the Tokyo tournament, her first event in the Far East this autumn. While some players heard to Asia, she opted instead to play the first event after the US Open in Quebec, Canada. There, she lost to Mona Barthel in the first round—a tight three-setter—but reached the finals of the doubles competition.

In Tokyo, however, her less-than-perfect luck in the draws of big tournaments has continued. Watson will face Sharapova for the first time since she took the current world No2 to three sets in the first found of the US Open in 2011. Watson went on to face No1 Victoria Azarenka in the opening round at the Australian Open in January and Li in her opening match at this year’s US Open.

Watson will be grateful that she has a couple of qualifier matches under her belt before what must seem a baptism of fire in her first ever tournament in the WTA Asian swing.