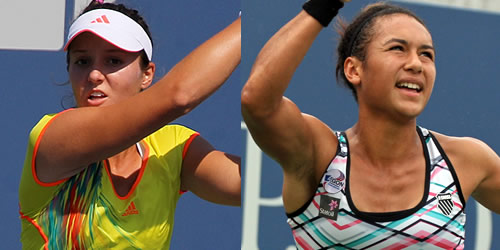 With the end of the WTA tour fast approaching, the top two British women, Laura Robson and Heather Watson, are making an impressive surge at this week’s International tournament in Osaka.

Both are playing in the concluding event of the Asian swing, where top seed Sam Stosur is also competing for the reserve place at the WTA Championships in Istanbul which begin in less than two weeks’ time.

After a ground-breaking run at the US Open, beating two Grand Slam winners before falling to defending champion Stosur, Robson went on to break more new ground by reaching her first WTA final at the Guangzhou International.

In her first outing since reaching the fourth round in New York, she beat three seeds, including world 23 Jie Zheng and the 32-ranked Sorana Cirstea, on her way to a dramatic final. There, after almost three hours, Robson eventually lost to Su-Wei Hseih.

It meant that the Briton began this week at a new career-high ranking of 56—52 in the race—having begun the year at 131 and starting 2011 outside the top 200. By Wimbledon this year, she had broken the top 100 and went on to win Olympic silver with Andy Murray in the mixed doubles.

By the US Open, Robson had cracked the top 90 and qualified for the main draw of a Grand Slam by right for the first time. There, as the youngest woman in the draw, she beat Kim Clijsters and La Ni before succumbing to Stosur in the fourth round.

This week, Robson completed another first: a seeding in a WTA tour event—No8 in Osaka—where she has reached the quarterfinals with relative ease. First she despatched former world No14 Eleni Daniilidou and then qualifier Yi-Miao Zhou, and now she faces a decent draw against the No134-ranked Kai-Chen Chang.

A win is likely to set up a first rematch with Stosur since New York, and if she reaches that semifinal face-off, Robson should achieve her declared target for the end of the year, a place inside the top 50—and with time to spare before she turns 19 in January. Indeed Robson is the youngest player in the top 100, the only 18-year-old and one of just six teenagers.

Since Watson made her run to the third round of Wimbledon and overtook her compatriots to head the British women’s rankings at 67, she has struggled to build on her 2012 success. She lost to Li in the first round of the US Open, then in Quebec she lost in the first round in a tight three-setter to Mona Barthel.

But she played some morale-boosting matches after qualifying for Tokyo, first beating No30 Sabine Lisicki and then taking a first-set tie-breaker from Maria Sharapova before losing the match in three.

Watson’s Asian swing dipped in Beijing last week where she lost in qualifying from a set up to Italian Camila Giorgi, but this week she has rediscovered her form to notch up two good wins to set up a quarterfinal match against Pauline Parmentier.

Her first victim in Osaka was the 6ft Polana Hercog, No74 in the race and winner in Bastad this year. Even more impressive, Watson next beat the No6 seed, Anabel Medina Garrigues, currently ranked 40 and with 11 titles to her name.

A win against Parmentier, who is ranked just two places below her, to earn a semifinal spot could take Watson, like Robson, to a new career-high ranking by the end of the year.

News of former British No1, Elena Baltacha, has been less good. A persistent injury that has kept her out of competition since the Olympics finally resulted in surgery to remove a piece of bone from her right foot.

Although the surgery has been successful, Baltacha has not yet decided whether she will return to the tour next year or instead retire and devote all her time to the tennis academy she runs in Ipswich for youngsters from deprived areas.

Baltacha started the year at No50 but with only five wins from 17 main tour matches this year, she has slipped to 135, and rather lower in the race.