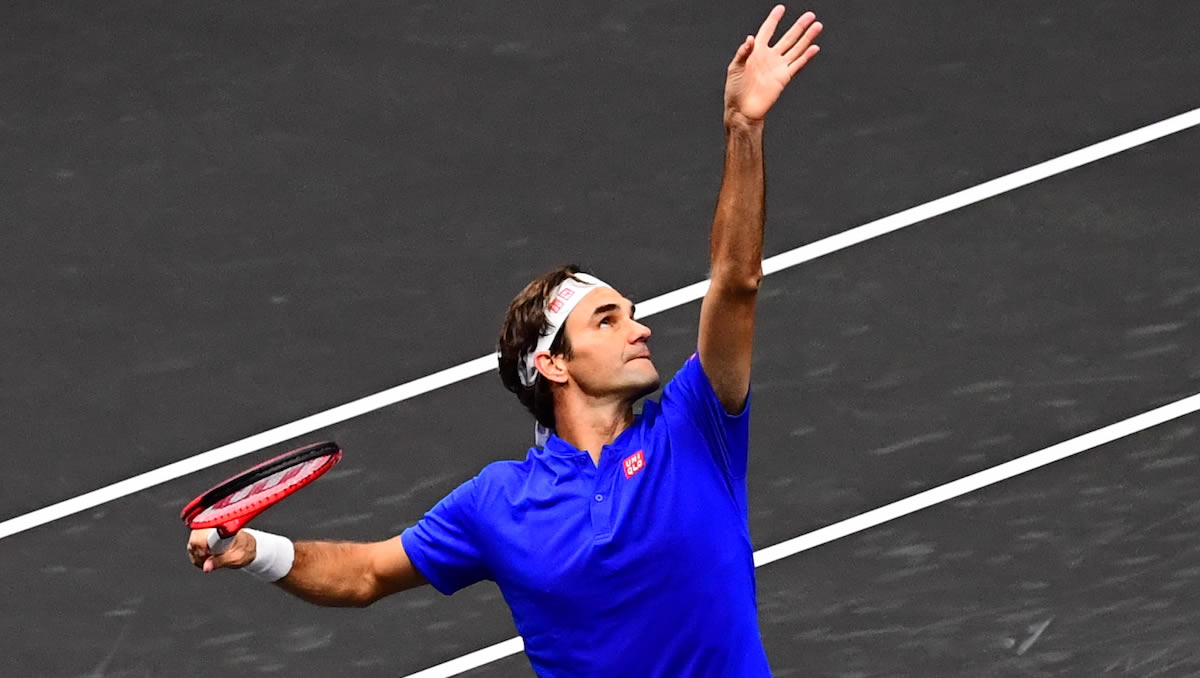 The third playing of the Laver Cup got off to a flyer on opening Friday, with every match bringing tests and challenges.

Dominic Thiem and Stefanos Tstisipas both edged singles wins in match tie-breaks. Jack Sock overturned expectations to beat Fabio Fognini, but needed a second-set tie-break to do so. And the dream-team of Roger Federer and Alexander Zverev, separated by 16 years in age but with a close mentoring bond built over several years—plus a common language, German—came through a tough doubles conclusion to give Europe a 3-1 lead.

And the Federer/Zverev duo was up first in singles come Saturday, aiming to start the second day with a bang, and what was now two points per win. Should they still have been tweeting messages at midnight after the emotional roller-coaster of that first Laver Cup day? Time would tell, especially as each took on big, and big-serving, men from Team World playing their first matches.

On paper, 22-year-old Zverev and 38-year-old Federer were favourites: Each had substantial head-to-heads over John Isner and Nick Kyrgios respectively. But that told only part of the story. These pairs had played one another on many stages, including the Laver Cup.

Last year, Zverev had to come back from a set down to beat Isner 3-6, 7-6(6), 10-7—a whisker between them—and at the same stage of the competition. But if that was close, the match-up between Federer and Kyrgios was far, far tighter.

Yes, Federer had a 5-1 advantage, but in all three ATP best-of-three matches, they had gone to a final-set tie-breaker. Indeed eight of those nine sets had needed tie-breaks. And while Federer enjoyed a relatively straightforward win over Kyrgios in the Chicago Laver Cup last year, their first in Prague was a nail-biter, and key to Europe’s ultimate victory: Federer won from a set down via a tie-break second set and 11-9 in the decider.

In short, here was the home hero against the man who, probably more than any, thrives in this team environment and in this raucous setting.

Federer talked after his opening appearance on Friday night of the electric atmosphere generated by his Swiss city—but made no secret of seeking more:

“During the match, I think it’s good, good energy. Sometimes there are moments where I feel like [the crowd] could be even more cheerful, but I’m not going to start complaining at all. I’m very, very happy. If it stays this way, it’s great, but I always think that Friday is, of any days, the slowest one… I don’t know if you can top it. I really don’t. But I think they’re going to even take it up a notch.”

He did not know how prescient that comment would be.

Zverev, playing the most formidable server on the tour in 6ft10in Isner, put on his own serving display in the opening set, 19/19 first serves as they reached a tie-break. But having failed to convert the only break point of the set, he now had to find a way to defuse the Isner serve, and the American was playing aggressive, forward-moving tennis.

But Zverev was performing well at the net, too, and his team and the crowd rose to encourage some great net finishes—now up to 11 points. Isner’s first double fault made it 4-1 to Europe, and Zverev sealed the set 7-6(2). It fell to Nadal to lead the support from Europe’s bench, but Federer, watching from the warm-up suite, nodded his approval with a smile.

However the smile was on the World’s side when Isner finally got a break in the ninth game of the second set, and served it out, 6-4. And he carried that momentum into the tie-break conclusion with a vengeance, racing with 140mph plus serves and volley finishes, to a 10-1 victory. He jumped and pumped, for he had levelled Team World with Europe, 3-3.

Now it was the marquee match of the day, as described by Kyrgios himself. And it all went to plan for the home side with an early break to Federer, 3-1. But a loose service game from the Swiss, and some patient rallying from the Aussie, got an immediate break back.

They edged, as so often before, to a tie-break, and in truth, Kyrgios was holding with more ease than Federer. But the Swiss stole a quick march 4-0, before a Federer shank got Kyrgios on the board. It was the first of a succession of errors from Federer, now 4-4. Kyrgios was on fire, smashed a volley winner, and on match point slotted a pass for the set, 7-6(5), a set that Federer, arguably, should never have lost.

Kyrgios seemed to have the upper hand for much of the second set, too, as Federer got bogged down, perhaps by nerves—and the energy had drained from the arena—but also from the burgeoning confidence and serving of Kyrgios.

Time and again, Federer had to hold to stay level, but a timely return by Nadal from his afternoon practice—and he would play the two evening matches—the momentum switched.

The friends exchanged tactics, notably to break the comfortable rhythm of Kyrgios with chips, shorter balls, more variety, and that is just what Federer managed. He could not convert from 0-40 up, as the Aussie smashed down three big serves, but Federer had one more bite of the cherry and converted for the break. He served out the set, 7-5.

Once again, it would go to a tie-break set, and after going down 2-0, the Swiss stormed the next five points—a leaping smash winner, a forehand pass, a swing volley winner, and the arena erupted, chanted, expected.

Kyrgios closed 8-3 down to 8-5, but Federer served his best just when needed, and sealed the two points for Europe with a roar, 10-7.

The power of Fedal had risen to the challenge, and not for the first time—their coaching interactions with fellow players have been played on repeat on Twitter through every match.

And the Swiss will undoubtedly be on hand to boost his friend when Nadal takes on back-to-back matches in the latest episode of what must be one of the most iconic rivalries in sport. Bjorn Borg may, on paper, be captain, but the dynamic duo of Federer and Nadal is proving to be the power behind the Europe throne.