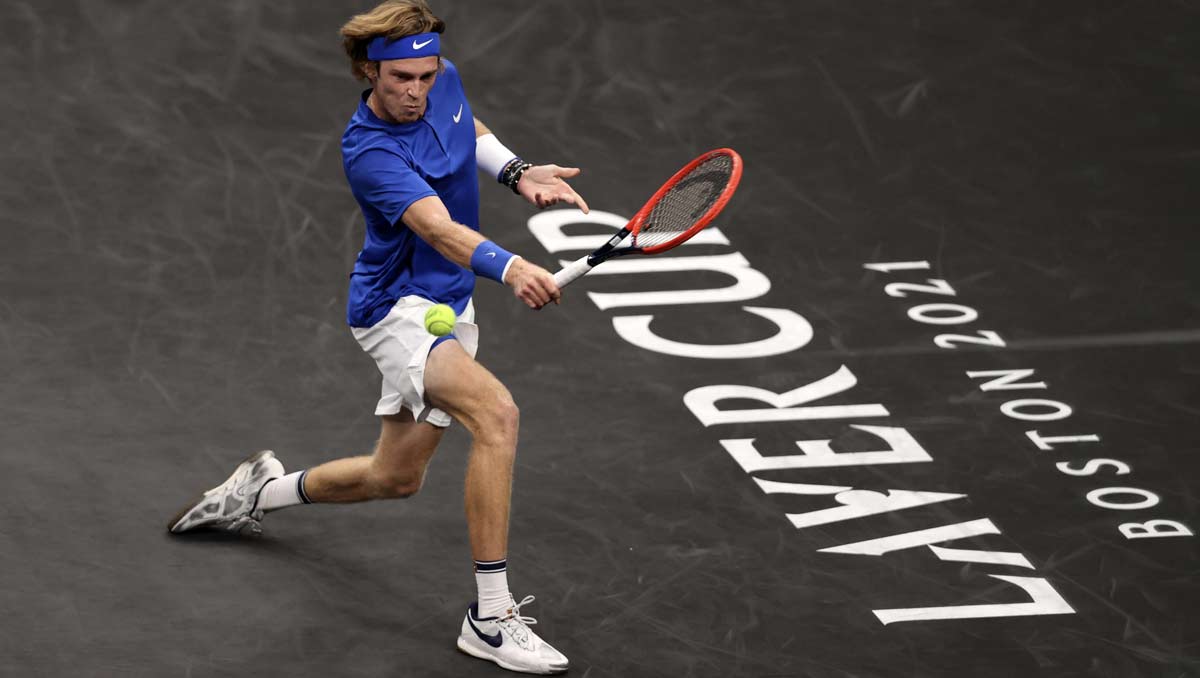 It was the kind of record that none of the World Team at this year’s Laver Cup would have relished, but playing in front of a home crowd in Boston, they suffered a clean sweep of four losses on the middle day of competition. And that meant the Reds faced an 11-1 deficit as play got underway at midday at the TD Garden.

Now with three points for every match-win at stake, it meant Europe needed to win only one of the optimistically-scheduled four on the card.

Unlike the other two days, it all began with doubles, and Reilly Opelka and Denis Shapovalov were the ones in the frame. But they took on Alexander Zverev and Andrey Rublev, a pair of players who, though they now live and play for different home nations, had grown up on the junior circuit together.

The slightly younger of the duo, Rublev, was very self-deprecating about his doubles skills after the match:

“I was thinking I’m one of the worst ones in doubles, that I can only shoot forehands and that’s it. But it looks like I can play doubles really well.”

And that despite having joined forces with Stefanos Tsitsipas to win one doubles match in Boston already. What is more, a quick look at his professional resume soon put right any further doubt. Twice he, with Karen Khachanov, had been runners-up in Masters tournaments, and twice he had won titles, most recently with Aslan Karatsev in Doha this year.

Zverev, too, had a good deal of doubles experience, having played regularly with his elder brother Mischa. Together, the Zverevs had won two doubles titles from seven finals, and for all his big-hitting strengths from the back of the court, Zverev junior had shown how adept he could be around the net too. In his marathon battle on Saturday against John Isner, he had won 18 of 22 forays at the front of the court.

But the two men had not played together before. Not that it seemed to make too much difference, and Rublev in particular picked up where he had left off on Saturday night’s doubles match, firing two winners to break the opposition in the opening game. And it went from bad to worse for Rest of World, as Shapovalov also lost his serve, helped not a little by two double faults. His team was 0-3 down.

World finally got on the board for 4-1, and had a break chance in the next as Rublev’s net skills went awry for three errors. But the opening was snuffed out—conversely via a Rublev volley winner—and Shapovalov had to serve to save the set. He forced Europe to serve it out, which Rublev did with an ace, 6-2, after half an hour.

Europe had a great chance to break in the fifth game of the second set, too, working 0-40, but the huge Opelka serve found its groove to hold. And at 4-4, the four men treated the crowd to a dazzling rally of lobs, retrievals, overheads and a hold for the Reds.

So it went to a tie-break, and there, the serving prowess of Opelka and the leftie returning of Shapovalov got the breakthrough, they reached 6-3, and converted for the set, 7-6(4).

It would be a match breaker, then, and once again, Europe took the first advantage courtesy of a couple of volley winners from Rublev, 4-1. He pulled off another touch net finish for 9-3, and grinned in delight at Zverev, who would now serve for the trophy. Fittingly, Rublev fired a volley winner to seal it, 10-4.

That, then, was the trophy for Europe for the fourth straight year, and in the most decisive of scorelines, 14-1. Of course both young players, and then captain Bjorn Borg, paid tribute to the Red team and there had indeed been several matches decided by a match tie-break. As Zverev said:

Yet looking at the tournament overall, the quality and depth of the Europe six impressed at every stage. And that bodes well for tennis in the coming years, with these top-10 men, all age 25 and under, ready and able to step up to the plate—for themselves or for their team.

It must have made Roger Federer proud, and all the more so because it is uncertain how many more times he will be able to play at the tournament inspired by his wish to celebrate Rod Laver.

The players, and both captains, pointed the Swiss, who had made the trans-Atlantic journey on crutches following recent knee surgery, and he watched the matches unfold from the stands rather than on the team bench. But he will go to London’s O2 next year in the knowledge that the event is in plenty of capable young hands. And one day, perhaps, he will take Borg’s place as captain, too.

Until then, it is the young stars who beamed, joked, drenched each other in champagne—and then returned for an exhibition doubles match to help make up for the early finish in Boston.