Laver Cup 2022: The last dance of Federer and Nadal, as Europe hope for fairytale ending

It is not the first pairing of the two icons, but will be their last; Team Europe get opening Ruud win 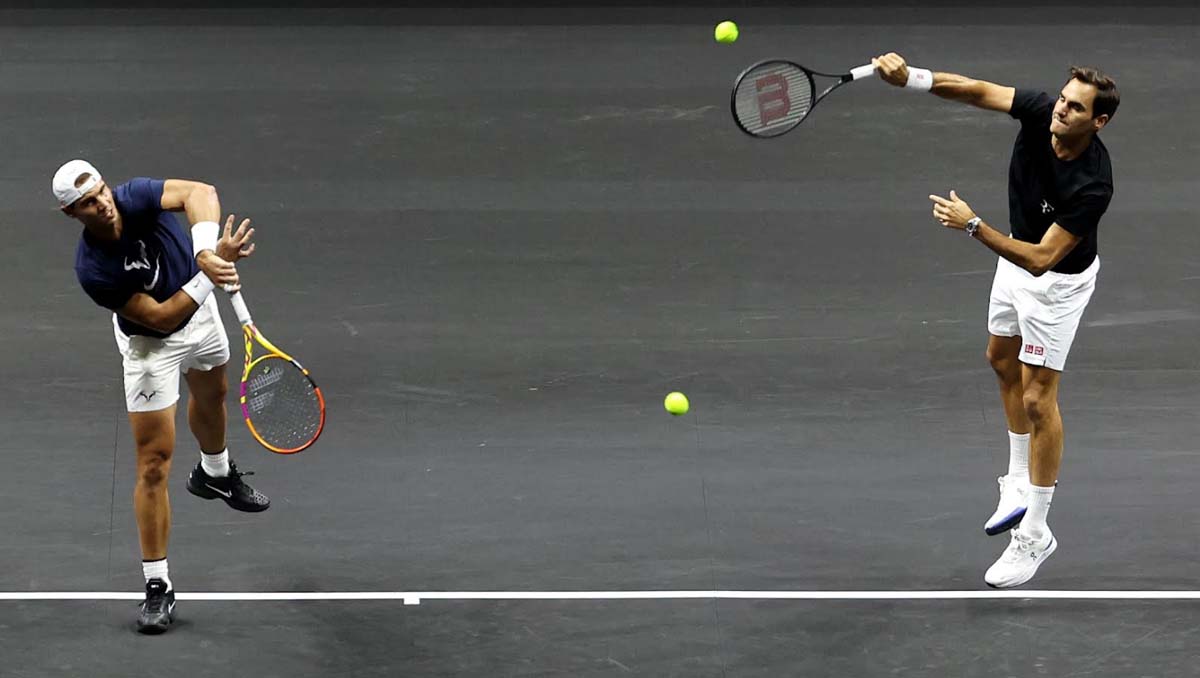 Almost exactly 24 years to the day after the 17-year-old Roger Federer, still barely inside the top 1000, won his first senior tour match—against the 45-ranked Guillaume Raoux in Toulouse—the Swiss superstar was about to play his last professional match.

It had not been part of the long-term plan for the iconic O2 arena in London to host such a moment. Federer’s home town of Basel was on the schedule for next month, and because he had not played since a straight-sets loss at Wimbledon 15 months ago and a third bout of surgery on the same knee, many had already pencilled in Basel as ‘the one’.

The ‘one’ where Federer, now 41 years old, would choose to bring down the curtain in front of his home fans.

That turned out to be a step too far. Instead, Federer had to face reality a few months back that his body no longer wanted to co-operate. A scan in July merely proved it, so retirement became a matter of how and when, not if.

After a holiday to churn it over, the decision came: What better place than the Laver Cup, where he already knew he would be among those players who had so impacted his career: Novak Djokovic, Andy Murray and, best of all, Rafael Nadal.

With his childhood idol Bjorn Borg as captain of Team Europe, and on the stage where he had won a record six ATP Finals titles, what could be a better time and place?

And soon, it was confirmed that the Swiss knee was not even up to the task of a singles match. So his ‘dream conclusion’ was to play doubles with dear friend and rival Nadal. Thus it was agreed by Borg and Team World captain John McEnroe that the rules of the tournament could—should—be bent just a touch.

For those closest to Federer—family, friends, coaches—there had undoubtedly been many tears already. And the Swiss was tested time and again since arriving in London: a long, solo press conference, then an intense Team Europe press conference, and one-to-ones with an endless stream of broadcasters.

There were certainly moments in those public arenas where he had to pause and gather himself, bite his lip, fidget with his collar, clasp and unclasp fingers. Even for a man who has sat through hundreds of interviews, and faced many heart-breaking defeats, this was a test of the highest order.

It is not as though Federer, famed for his calm and control on the court, was any stranger to shedding public tears, both in victory and defeat. There has been hardly a Major where he did not succumb, and in Basel 2019, when he won is 10th title, his fifth in a row, he wept as the standing ovation extended for minute after minute.

It would surely have been even more emotional had he known that this 103rd title was last title, knew that he would only play around half a dozen more events as one surgery to his right knee became two, and then the third soon after last year’s Wimbledon.

And so it was remarkable that, in the run-up to his swansong on Friday evening, he had managed to keep a lid on the waterworks. Indeed the comments of his fellow players had each of them as close to breaking point as Federer himself.

Nadal: “Tomorrow gonna be a special thing. I think very difficult, difficult one. Gonna be difficult to handle everything, especially for Roger, without a doubt. For me too. You know, at the end, one of the most important players, if not the most important player in my tennis career, is leaving, no? At the end, living this moment will be difficult… In a personal way, yes, has been very, very, very sad news and a tough day.”

Djokovic: “It’s a sad day for tennis but just sport in general. But Roger’s legacy will live forever. That’s for sure.”

Murray: “But this, to me, I think it feels right. Like, seeing him and Rafa on the same side of the net together and finishing their careers as a team in this event with Bjorn on the side of the court, John McEnroe there, Rod Laver in the stands. Is going to be a really cool way to end an incredible career… I don’t think there’s many better ways to go out than like this.” 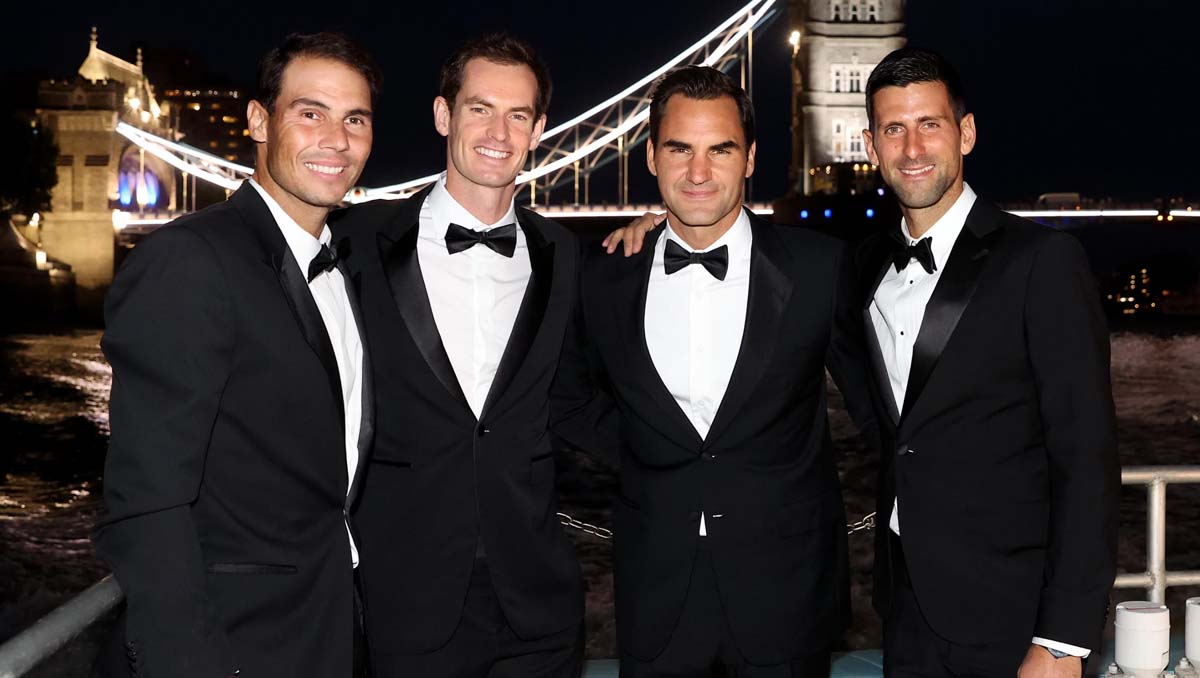 Federer has said many times that he is ‘a glass half full type of guy’, and he elaborated to Savannah Guthrie on NBC:

“I felt all of [the stages of grieving], also the ones where ‘I don’t want to deal with it, I just don’t want to think about it, don’t talk to me about it.’ I went through a lot of sadness and emotional moments, where you start thinking about everything you’re going to miss, and then you think, OMG, my life’s going to be miserable after. And then, you realise no, no, no, actually we’re going to have more time and do these amazing things now, so it’s going to be great.”

To Arab News, he added:

“I was in a very worried, scared place to face the music, the media, the fans and everything, being able to talk about it in a normal fashion without getting emotional, just because I know how much it means to me.

“But I feel like I probably went through a lot of different stages—I don’t know if you can call it grieving— and then you get to, I really don’t want it to be a funeral. I want it to be really happy and powerful and party mode, rather than the other side.”

So for now, the extrovert, positive Federer will drink in every minute, and he is not one to shy away from life’s little pleasures: No doubt he downed some Moet et Chandon at the black-carpet gala at Somerset House last night, and maybe something equally indulgent at dinner with his illustrious companions at the Tower of London on Wednesday.

The time is not for sadness but for a celebration for the 24 years of sublime tennis and outstanding achievements the great Swiss man has produced. His fans got more, and for much longer, than they could ever have hoped for.

Federer and Nadal would join forces for the second time, following Andy Murray against Alex de Minaur in the evening session. The ‘Fedal’ pairing first made its appearance at the Laver Cup in Prague in 2017, when they beat Jack Sock and Sam Querrey in a 10-point tie-breaker. Sock will this time be joined by Frances Tiafoe in a very strong American pairing: It may, or may not, be a fairytale ending for Federer on court, but he will stay at the tournament until the trophy is decided on Sunday—and will hope in Europe’s favour again.

The initial script did not go quite to plan in the opening match. Casper Ruud served for the first set, only for Sock to find a flurry of winning passes to break back. The Norwegian did break again for the set, 6-4, but lost the second, 5-7. Ruud also went down 3-0 in the deciding 10-point tie-break, but pulled it back to earn the first point for Europe, 10-7.

Each of the four matches on Day 1is worth a point to the Team. On Saturday, the matches become worth two points, and finally on Sunday, three points per win. The first team to 13 wins the Cup.