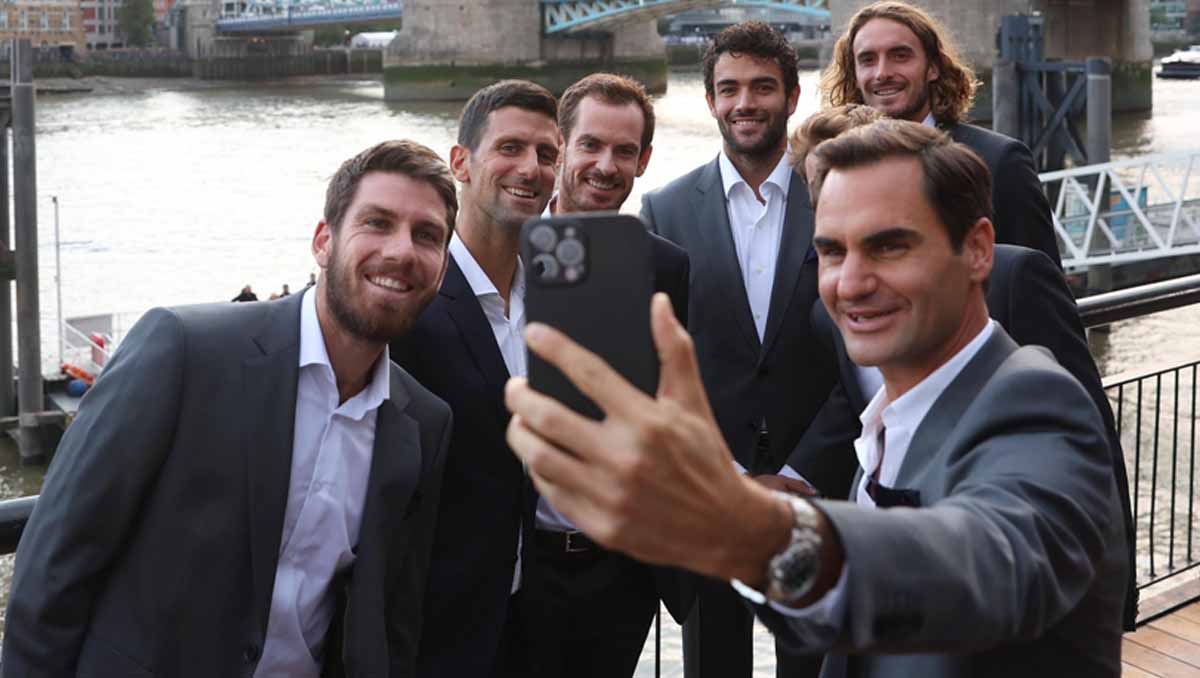 If the noise and excitement of the fans during the practice session of the players involved in this year’s Laver Cup is anything to go by, the actual show—its five sessions, and dozen or so matches—will lift the roof off London’s iconic O2 arena.

This was a unique taster in a truly novel event that will see all of the so-called ‘big four’ of tennis join forces for Team Europe. Indeed, Team World captain John McEnroe must wonder what he has done to deserve taking on Roger Federer, Novak Djokovic, Rafael Nadal and Andy Murray—plus, for good measure, the new world No2 Casper Ruud, No6 Stefanos Tsitsipas and as alternates, No8 Cameron Norrie and No15 Matteo Berrettini.

But that quartet, well they were the ones that most of the fans were here to see. All former No1s, with a tally of 65 Major titles and 116 Masters titles, 12 ATP Finals trophies plus a clutch of Olympic medals, they had come together in what, unexpectedly, took on a new dimension when Federer announced that it would be his last event before retiring from the sport he had graced for around 24 years.

Little wonder, then, that the three super-stars of the last couple of decades, along with home hero Murray, drew such crowds and such passion. Never had the four played one another on the same court, with Federer and Nadal facing Djokovic and Murray. And they will never do so again, so the phones were out in force to capture the moment.

But preceding this memorable session had been another more intimate, and highly emotional coming together of Team Europe in the confines of the pre-tournament press conference. And it was inevitable that questions and answers focused on the occasion—the closing chapter of Federer’s career.

Sitting in the centre of his team, Captain Bjorn Borg was flanked by Djokovic on one side, Federer on the other. And on the left of the Swiss was the newly-arrived Nadal, affirming that the two great friends and rivals would indeed play together in the first doubles match on Friday evening.

To Djokovic’s right was his own childhood rival Murray: The two are separated by just a week in age, came through juniors together, and went on to face one another in countless finals—most notably for Murray in his first Major victory at the US Open.

From the general, the questions soon became particular, and the mood reflective. It began with Nadal, asked about the pressure of playing with Federer in the Swiss man’s last ever match:

“Different kind of pressure. After all the amazing things that we shared together on and off court, to be part of this historic moment gonna be something amazing, unforgettable for me… “

The two go back a long way: the first of 40 singles matches was back in 2004, Federer age 22, Nadal not quite 18, and the Swiss man, newly at No1 in the world, knew immediately that he had a significant rival.

Nadal won in the third round of the Miami Masters, and while Federer beat him in the title match the following year, the Spaniard became a thorn in his rival’s side through countless finals. Not until the last few years, indeed, had Federer begun to turn the tables by winning six of their last seven matches.

They had, though, joined forces on other occasions, in particular in exhibition matches for each other’s charitable foundations, and it was away from court that the bonds clearly grew, between both them and their families.

Little wonder, perhaps, that both men had to hold back the tears as they spoke of what this last event meant to them. Federer’s first comment:

“I’m not sure if I can handle it all. I’ll try. I have had some tougher moments as well in the past, being horribly nervous, you know, all these years sometimes before matches. This one definitely feels a whole lot different.”

Nadal, in his turn, became emotional about their relationship, and what lay ahead:

“Something that probably we are very proud [of] has been a friendly rivalry. Not easy sometimes, because we are playing for such important things for our tennis career, but at the same time we were able to understand that, at the end, personal relationships are more important sometimes than professional things.

But Nadal’s response to a question about the prospect of his own retirement hit the mark: Federer bowed his head, bit his lip:

“Well, I don’t need to listen to this news to know that the end is closer. You know, the normal cycle of life is this, no? Some people leave and others need to come. Nothing new. History repeats always. Just this time it’s us, and in this particular case is probably one of the most if not the most important player in the history of this sport that is leaving after super great and super long career. Some of us, we were able to share this long career together…

“Is true that when first leaving, in your mind you miss something, no? In a personal way, yes, has been very, very, very sad news and a tough day.”

And finally Murray, who struggled to hold it together: For he, more than most on the panel here, had looked down the barrel of the retirement gun, had shed his own tears in the very public arena of a press conference at the Australian Open in 2019, but bit the bullet, had a replacement hip, and returned to the fray. His own trials and tribulations now underpinned his words and tone.

“I mean, for me the last few years, I think as you get older as athletes and with some of the physical issues, you do think about when should you stop and when is the right moment and how would you like it to be.

“It’s impossible to know, I think. But this, to me, I don’t know—maybe it doesn’t feel the same way for Roger, but I think it feels right. Like, seeing him and Rafa on the same side of the net together and finishing their careers as a team in this event with Bjorn on the side of the court, John McEnroe there, Rod Laver in the stands. Is going to be a really cool way to end an incredible career.

“Yeah, I have thought about it myself, but I don’t think there’s many better ways to go out than like this.”

It was enough to draw a notable interjection from Federer:

“Maybe one thing I would like to add. I always felt—or sitting here it feels good—that I go first from the guys. It just feels right [smiling].”

And that has been his way of coping, it seems, these last days: turning the pervading mood of sadness with a bon mot. As his rivals lined up to choose their most memorable matches against him, he jumped in:

And after Djokovic picked his first, his losing final to Federer at the US Open in 2007:

“He’s being nice now! Thank you, Novak… We are going to get to the other 20-plus matches.”

Sure enough, Djokovic added a second, the epic Wimbledon title match of 2019, in which Federer failed to convert two match points: “2019, sorry, Roger, finals of Wimbledon.”

Federer jumped in: “What happened? [grinning] I’ve blocked it out!”

Not that the young members of the team did not feel just as moved. Tsitsipas said:

“I missed Roger actually a lot… He’s someone I always thought, when is he going to come back? Having that opportunity [to practise] a few days ago made me kind of feel alive again, feel in a way inspired, because he’s the reason I pursued a single-handed backhand. He’s the reason I felt a need to go for a professional career in tennis. So it’s a very special moment to be part of this competition.”

Finally, the coup de grace, came from Borg who, in his day, was the cool, calm and collected presence on and off the tennis court. But his association with this event, sharing the captaincy with his own friend and rival McEnroe, and forming a close bond with Federer, who idolised the Swede when he was young, has released the restraints.

His closing statement left barely a dry eye in the room:

“Roger stepping away from tennis, you know, to have the greatest player who ever played the game to be part of Laver Cup, to be part of Team Europe, for me personally, I cannot feel better to have all these players here.

And with that, they stood, left the stage and, one suspects, got rather emotional behind the scenes.

However, rather like the public practice session this afternoon, that was the taster: Hold your hats for that doubles match, and the uproar as ‘Fedal’ leave the stage to face the media together one last time.