Lewis Hamilton has the chance to define the undefined at Mercedes

Lewis Hamilton has the chance to carve out an identity for Mercedes which is currently only notable in its absence, says Chris Bailey 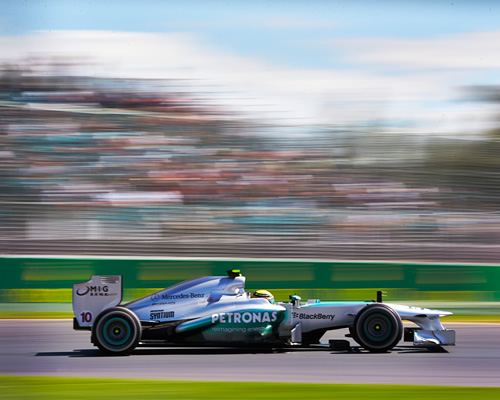 When Lewis Hamilton trundled out of the pits for Melbourne free practice on Friday morning, he may have taken a moment to gulp in trepidation.

Of course, no one burst this bubble but himself. In a move as brash as those he makes on the race track, Hamilton departed amid pomp and fanfare to a team that decidedly lacks it.

Mercedes-Benz – its personality drenched in the directionless colour of its cold steel paint job. A bumbling, latter-day Michael Schumacher injected neither nous nor pace into the machine (you got the impression he was there for the joy-ride) and Nico Rosberg remains a deputy rather than a talisman.

So why jump ship – a ship, while not sinking, requires more than a few repairs? The cynics may scoff at an eye-watering pay packet, the realists could argue his relationship with a Ron Dennis-free administration was veering towards the irreparable after a series of blunders and mishaps.

But perhaps the official line is worth more consideration than first sneer – the “challenge”. To evolve a rudderless outfit into a legitimate title-contender, proving to the Formula 1 fraternity he is not some molly-coddled project of a team steeped in both history and cash.

The idea gains more traction if we plot the career trajectory of Hamilton’s former team-mate – and sworn antagonist – Fernando Alonso.

The Spaniard fled McLaren for Ferrari at the earliest opportunity after spending the best part of his 2007 tenure butting heads with his petulant partner.

Kimi Raikkonen may have guided the famous Scuderia to glory before Alonso – save a brief interlude at Renault – took up command, but it was truly sprawled in the doldrums after a 2009 season wracked with a bloated car design and Felipe Massa’s freak accident.

Then Alonso’s aura – the aura of a champion – shot through the organisation, dragging the staggering giant into the spotlight once more.

Now, what Ferrari lack in Red Bull’s capacity to reinvent the wheel they make up for in Alonso’s indomitable will. No drivers’ championship has landed yet but, just watch how the tifosi shudder should you ask how they would look without their Iberian leader – perhaps a Mercedes-smeared in Rosso Corsa.

Which brings us full circle to Hamilton.

There is more than a note of irony that just as Alonso eventually filled the Schumacher-shaped void at Ferrari, now does Hamilton take up the German’s mantle at Mercedes. Unlike his rival, however, the Englishman can carve out an identity for Mercedes which is currently only notable in its absence.

Be it Schumacher or the spectre of Juan Manuel Fangio, Alonso can never claim to stand alone in history as the force which epitomises Ferrari. But Hamilton now has a chance to define the undefined.

That gulp of trepidation, a nod to a hazy future, would have been forgotten as soon as he rounded Brabham and Jones – Albert Park’s Turn One and Two punch – and fizzed across the shadows under the circuit’s age-old trees.

Only Hamilton can determine whether he stays in those shadows forever.