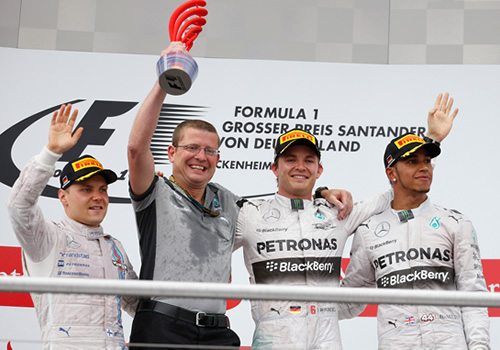 Nico Rosberg and Lewis Hamilton on the podium in Germany Photo: Mercedes

Lewis Hamilton insisted he was satisfied with a podium finish after fighting his way up from 20th on the grid to finish third at the German Grand Prix.

Hamilton’s Mercedes team-mate Nico Rosberg claimed victory ahead of Williams’ Valtteri Bottas to leave the German 14 points clear of the Briton in the drivers’ standings.

After starting from 20th on the grid following a 130mph crash on Saturday and a five-place penalty for a gearbox change, Hamilton surged up the places – and the 29-year-old was pleased with his recovery at Hockenheim.

“I had great fun,” said Hamilton. “I did as good as I could. It was hard to get through the pack safely and I had a little bit of a collision with Jenson Button.

“I thought he was going to open the door which he has done a couple of times lately but that was my bad judgement. It was hard to overtake so I’m glad to get some points today.”

Rosberg, who had never finished on the podium in any race held in Germany before Sunday, added: “It’s fantastic. It’s an amazing feeling to win at home. It’s a very special day.”

Bottas said: “I feel really happy again being third time in a row on the podium.

“These guys were too quick today but really happy we managed to keep at least one of them behind, it was not easy, needed all the info from the engineers, engine modes and so on.”