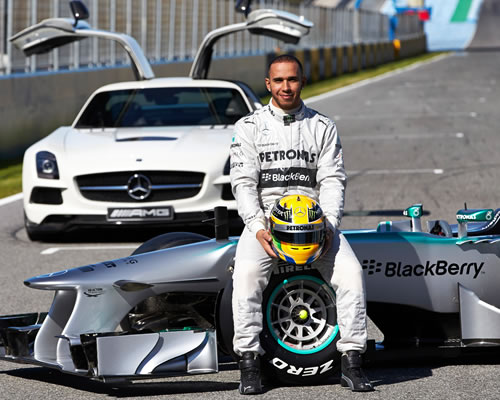 Lewis Hamilton has declared himself ready for a “new chapter” in his career after Mercedes unveiled its car for the 2013 season, the F1 W04.

The Briton, who signed a three-year deal with Mercedes last year after opting to leave McLaren, insists he is raring to go ahead of the new Formula 1 season.

“It’s the start of a new chapter for me, a new adventure, and when I walked through the doors in Brackley, I was so excited to get down to work,” said Hamilton.

“I’ve been at the factory for a few days now, getting to know the guys, meeting my mechanics and engineers, learning myself into the team and I have never seen a group of people that is hungrier for success than this one.

“They have been flat out this winter trying to pack more performance into the new car and I can’t wait to drive it and see where I can make a difference to help push the team forward with Nico.”

Hamilton admits that it is likely to take time for the team to develop into genuine title contenders – but the 28-year-old insists he is happy to play the “long game”.

“This is a new start for me with the team in Brackley but I have worked with Mercedes-Benz for a very long time now, and I learned one thing most of all: Mercedes-Benz doesn’t know how to lose.

“We are playing a long game here but I know we will have success together and I´m excited to be a big part of making it happen.”