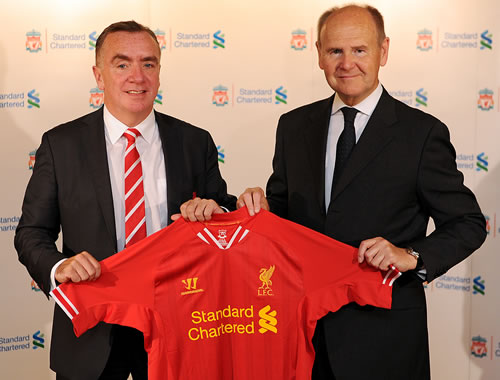 Liverpool have announced a two-year extension to their shirt sponsorship deal with bank Standard Chartered until at least the end of the 2015-16 season.

The bank signed up as the club’s main sponsor in July 2010 and has appeared on the front of the Reds’ shirts for the last three seasons after taking over from Carlsberg.

Liverpool chief commercial officer Billy Hogan said: “When Standard Chartered first came on board we knew we found a partner that shares our passion for community and desire to make a positive difference.

“We are delighted to announce the extension of our partnership, which shows the belief and continued commitment to the work that we are doing together and the values that we share.”

Liverpool have just embarked on a tour of Asia and Australia in partnership with Standard Chartered, where they will play in Jakarta, Melbourne and Bangkok.

Standard Chartered group chief executive Peter Sands added: “Our sponsorship of Liverpool Football Club has proved successful for both parties and we are delighted to be extending our partnership.

“Liverpool are hugely popular in the markets where we do business, and we are excited about the opportunity to continue to work with this fantastic club and their passionate fans.”

Mourinho: I was always dreaming of returning to ‘special’ Chelsea