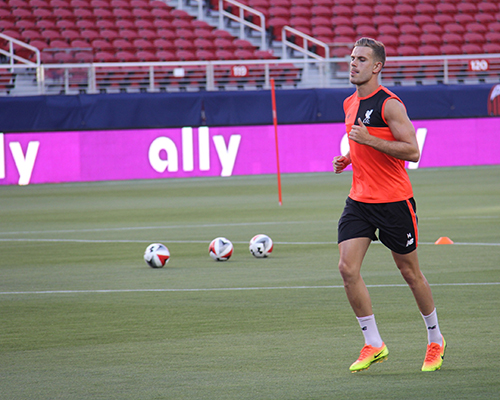 The Liverpool FC captain started alongside Fabinho and James Milner in the middle of the park for the trip to the relegation candidates.

Henderson has made a strong start to the season alongside his compatriot Milner despite being limited to five starts and four substitute appearances in the Premier League.

The England international started Liverpool FC’s 1-0 loss to Napoli in their last Champions League fixture to leave the Reds in second place in what is proving a difficult group.

However, Henderson was off the pitch when Lorenzo Insigne scored Napoli’s winner after summer signing Fabinho replaced the Liverpool FC captain.

The Reds have the chance to secure six points in their next two games against the group’s whipping boys when Red Star Belgrade make the trip to Anfield on Wednesday night.

Speaking at his post-match media conference following Liverpool FC’s 1-0 win against Huddersfield, Klopp gave an update on Henderson ahead of the Champions League clash.

“I hope so [that the injury isn’t too serious],” said Klopp.

“It was not that he felt nothing but he didn’t feel a lot. He wanted to carry on – that’s a good sign. We decided no. Hopefully it’s nothing.”

Red Star Belgrade held Napoli to a 0-0 draw in their opening Champions League fixture before Paris Saint-Germain were 6-1 winners against the Serbian side earlier this month.

Liverpool FC have a good record in Uefa competitions since Klopp took over the reins from Brendan Rodgers in October 2015.

The Merseyside outfit beat Manchester United and Borussia Dortmund en route to the Europa League final in May 2016 before the Reds suffered a 3-1 loss to Spanish side Sevilla.

Klopp’s side were the leading goal-scorer in the Champions League last season after the Reds beat FC Porto, Manchester City and AS Roma in the knockout stage.

Liverpool FC lost 3-1 to defending champions Real Madrid in the European Cup final to miss out on winning the competition for a sixth time.