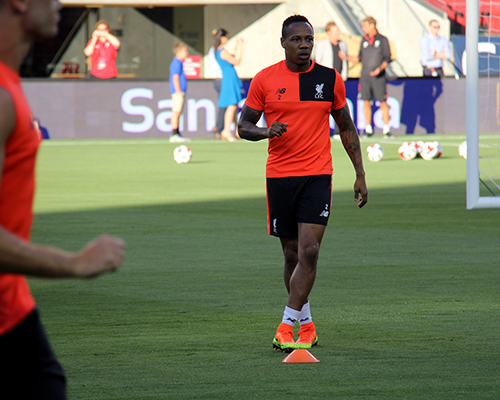 Jurgen Klopp has welcomed Nathaniel Clyne’s return to full fitness but warned the Liverpool FC defender that he faces a battle to win back his right-back spot.

The England international hasn’t played a minute of competitive football this season following a long-term back problem kept the 26-year-old sidelined throughout the 2017-18 season.

Klopp has utilised Trent Alexander-Arnold and Joe Gomez in a right-back role throughout the campaign so far with both England prospects shining in the Liverpool FC team.

Alexander-Arnold was particularly impressive in Liverpool FC’s 5-0 win against Porto in the first leg of their Champions League last-16 clash in Portugal on Wednesday night.

Clyne has been Liverpool FC’s first-choice right-back since Klopp took over the reins from Brendan Rodgers back in October 2015.

Speaking to the club’s website about Clyne’s return to full fitness ahead of their next Premier League game against West Ham United at Anfield on Saturday 24 February, Klopp said:

“Clyney obviously missed football! He loves it! It was a long time; it’s crazy how long it was and nobody could have imagined that, but it’s good [to have him back].

“All three can’t play, unfortunately! With the full-backs it’s always a little bit [difficult] and also who can play in another position as well. It’s quite specialist – so you either play or you’re not really involved. Clyney needs a little bit of time, that’s true, but [he looks] very good.

“Trent did what he did and it’s the first time he’s started three games in a row – I don’t think he thought he could do that. At Southampton, I thought maybe he was a little bit on the edge, but we had no other opportunity [to change] so we had to do it again [at Porto] and he did fantastic.

“It’s always like this, you need to be challenged and then you can see it and say, ‘I’m ready for that’. It was good to see.

“Joe is a very important player for us and good that he is back.

“You can see Clyney is just a really good football player and when he’s fully fit, we will have a comfortable situation in that position.”

Clyne has scored two goals in 97 appearances in all competitions since his £12.5m move to Liverpool FC from Southampton in the 2015 summer transfer window.

The Reds are in third place in the Premier League table and two points adrift of second-placed Manchester United in the race to secure a top-four place.