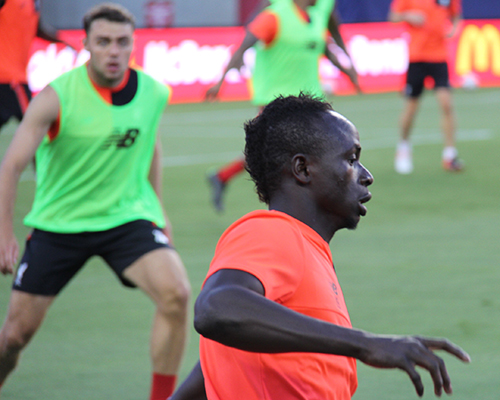 Sadio Mane insists it is too early to talk about Liverpool winning the Premier League title this season.

The Senegal international helped Liverpool to make a blistering start to the Premier League campaign following a return of three goals in four games in the English top flight.

Mane was particularly impressive in a 4-0 victory over title rivals Arsenal at Anfield to lay down an early marker in the title race.

However, Mane was sent off at the Etihad Stadium as 10-man Liverpool endured a humiliating 5-0 loss to Manchester City at the start of September.

Jurgen Klopp’s side failed to make a return to winning ways last weekend following a frustrating 1-1 draw with Burnley at Anfield.

Liverpool star Mane played down talk of Liverpool winning the Premier League title, although the club’s critics have been quick to discount Klopp’s side from the equation.

“Honestly, it is too early to talk about the title,” Mane told ESPN FC.

“We are not focused on other teams, just on ourselves, and we know we can beat any team in the league.

“These kind of results [no win in four games since the Arsenal victory] can happen in any team, but we will do our best to change the situation.

“We will try to take it game by game, and why not win it at the end?”

Mane moved to Liverpool in a £34m deal from Southampton in the 2016 summer transfer window.

The African forward scored 13 goals and made five assists in 31 appearances during his first season at Anfield.

The Reds signed four players in the summer transfer window in an attempt to overhaul Klopp’s squad.

Martin Keown: What must happen at Arsenal for Jack Wilshere to get fresh chance